Aaron had some seizures last night.  We think he only had two.  At least that’s all we heard.  But boy, is he ever out of it today!  It’s amazing how sometimes he bounces back quickly after seizures, and at other times he’s totally wiped out for a day or two.  I can only imagine what they do to his brain……physically, mentally, emotionally.

Throw in a dash of autism, stir the pot, and BOOM!!

It’s amazing, too, when you look at it in pictures.  Here is Aaron on Friday when I picked him up from his day group.

He had seen Spiderman, but even more important to him at that moment were the Sycamore seed pods he had found and couldn’t wait to show me……and later to show Gary.  Leave it to Aaron to find what to him is most unusual, but to us is very usual, and then to make sure that we see that object through his eyes.  He’s pretty cool that way.  Just look at the delight on his face!

Anyway, compare Friday to today.  He got up late this morning, dreary and slow from the seizures.  He seems to have pulled a muscle in his right arm, which was hurting him.  But he saw the Sunday morning coupons and so readied his usual coupon area for the job he always does, seizures or not.

Except this morning his body just wouldn’t cooperate.  This is how he ended up, coupons and coffee untouched.

A couple hours later we heard him getting off the couch.  He decided to cut the coupons and drink his coffee.  I checked on him shortly and here is what I found.

It wasn’t another seizure.  He’s just very tired today from the ones last night.

He woke up again awhile later, ready once more to try clipping coupons.  I heated his very cold coffee, which he drank while he read the Sunday comics.  Then he asked for his fuzzy blanket and his fuzzy pillow, and wondered if he could lay on the big couch.  He was only down for a few minutes before realizing that he just wasn’t sleepy anymore, so he got up and began the coupons that had been waiting all this time. 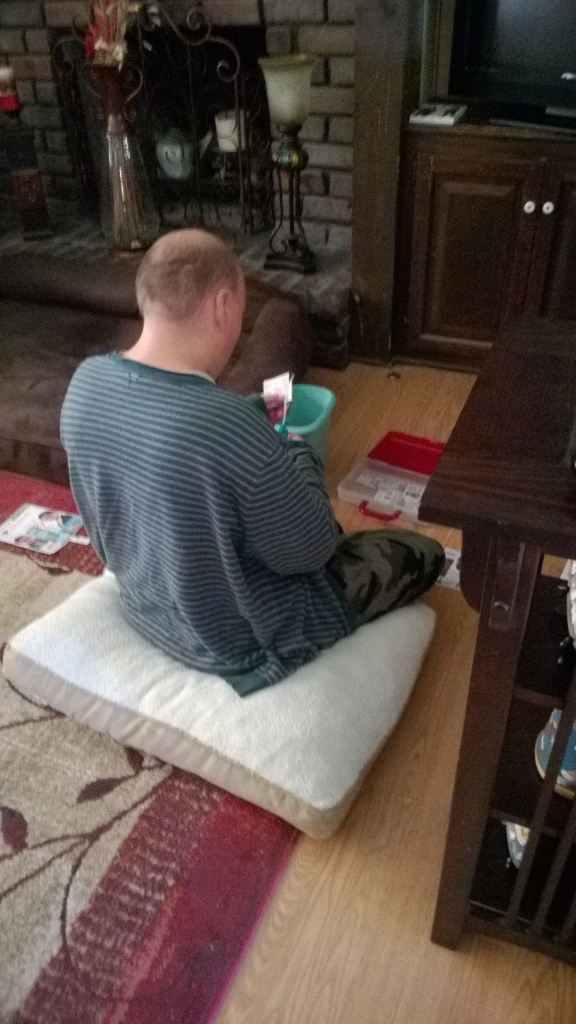 I tell you all of this so you can catch a glimpse into how seizures affect both Aaron and us.  Our day revolves around Aaron’s needs when things are normal, but when he is having a rough day physically then we must stop what we have planned and be here for him.  Gary and I can tag team on a weekend like this, but when it happens during the week then I must often change my plans in order to be with Aaron.  And sometimes Aaron has missed fun days, like movie days at Paradigm or other events, because of his seizures.

These days and these pictures are also an example of how Aaron’s life is full of ups and of downs, as all of us have, but which he cannot control, be it from seizures or from behaviors.  We saw it very clearly while on vacation last week, which I hope to write more about later.

Happy moments…..angry moments……sad moments……fun moments, are all wrapped up in Aaron.  This is why I think of myself, and so many others with similar issues, as Yo-Yo Parents.  We get jerked around a lot, that’s for sure, but must always remember that God is the one in control even when we feel like things are out of control.  He orders our steps, including the ups and even the downs.

And God comforts our hearts when we see the child we love having so many issues to overcome.

I have so many reasons for which to be thankful, but none more than the fact that the God I know and love also knows and loves me, and Gary, and most definitely our Aaron.

2 thoughts on “The Yo-Yo Life”