Skip to content
I remember climbing on my Daddy’s lap when I was a little girl.  He was sitting in his chair near the fireplace, with his shelves of books on one side and his end table on the other.  His newspaper was on the end table where he could eventually read it at the end of a busy, tiring day on the railroad.  His Bible was also laying there within easy reach.  He read his Bible often as he sat in his chair. He was always ready and willing to listen to my questions about what the Bible said about this and that, especially as I got older. 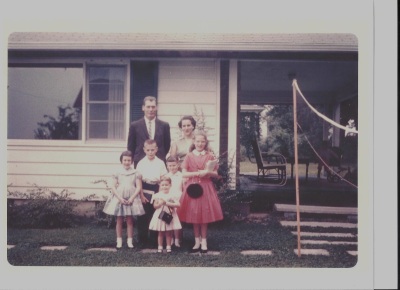 But when I was little and would climb on his lap, I remember the gentleness that he showed.  In the early years he smelled of pipe tobacco and smoke…..that subtle odor that comforted me.  I can still see him emptying his pipe of the old tobacco and then refilling it with fresh, tapping it gently and pressing the tobacco down just right.  I can hear the sound of the pipe stem on his teeth and see the soft, swirling smoke around his head at the end of the day as he relaxed.
Dad was never too tired to listen to us kids as we talked to him.  He was patient and kind, and so wise.  Sometimes when I would climb up on his lap, he would read me a book.  Sometimes we would just snuggle.  And at other times, he would take my hands and check my nails.  If they were too long, he would ever so carefully trim each nail.  I sat very still, watching him take each of my fingers and cut the nail just right.  Then off I would hop and go on my way, not giving much thought to that simple deed that Dad performed.
Until years later…..many years later.  The tables had turned, as they so often do, and I and my family had become the caregivers.  Dad was in his last month of life as the cancer he had fought for eight years was winning the battle.  I had been able to go home to help Jan and John as they cared for him and Mom.  It was a month of many cherished memories that fill my heart every day, especially during this Christmas season.  It was December when Dad died.  It was December and Christmas that he and Mom loved so much.
One day I rolled Dad in his wheelchair into the living room so that he could enjoy the pretty Christmas tree.  I helped him get onto the couch, his thin body so frail and weak.  Then I sat beside him and snuggled close to his bony side.  Words were few because it took too much energy for him to lift his head and talk.  But he still smiled….that gentle, kind smile that was his signature.
As we sat there in the soft glow of the Christmas lights, I looked down at his fragile hands resting on his lap.  Hands that had worked hard, disciplined well, warmly hugged, and folded in prayer.  And I saw that his nails were so long.  How had we let them get in that shape?  So I looked in his tired face and I asked him if he would like me to trim his nails.  He slowly lifted his bowed head and gave me that smile as he said yes ever so softly.
I got some clippers and a nail file, and I set to work on his nails.  I was afraid of hurting him so I worked very carefully, taking each finger and slowly trimming and filing.  He was very still and quiet as I worked.  Finally I was done.  He looked down at his hands and smiled again, and then slowly looked me in the eyes as he thanked me.  For days afterward, he talked about how good it felt to have his nails trimmed as he thanked me over and over.
And just as when I was a little girl, the significance of that act didn’t hit me until later.  Dad showed me such love in the simple deed of trimming my nails when I was young.  Now it was my turn to show him the same love in the simple deed of doing the same for him in his weakened state.  His strength was mine when I needed him.  My strength was his when he, many years later, needed me.
And it was the love and guidance of Dad’s hands that led me to be there for him at the end of his life.  He raised me and my brother and sisters well.  He loved us deeply, worked hard for us, and led us to know and love the Lord.

It seems like yesterday that I hopped off of his lap after he trimmed my nails, and ended up beside him on his couch trimming his nails beside the Christmas tree.  Now his and Mom’s memorial ornaments hang on my tree, and all I have are memories.

Aaron has had some rough days at Paradigm in the last few weeks.  Not every day, but many days he exhibits anger and aggression there.  It’s like he becomes The Incredible Hulk when he walks in the door.  Gary and I try to get to the bottom of it, but to no avail.  He doesn’t act like that at home.  He has issues at home, certainly, but not to the extent seen at his day group.  It’s discouraging and embarrassing and very frustrating to Gary and me.  If only Aaron would talk about it on a heart level, but even Aaron doesn’t really know why he reacts the way he does.  These autism behaviors are like that.  Unexplainable…..spontaneous……disruptive……sometimes hurtful.
This past Monday, Aaron was in a mood when he woke up.  It was because of the bad day he had at Paradigm on the day before Thanksgiving.  That dark cloud was still hanging over his head.  We worked through his issues on Monday and he decided to go to Paradigm.  On the way there, he was very happy to stop with me at Wal-Mart.  I hoped that Aaron would let me pick something up there for him to eat for lunch at Paradigm, but for some reason Aaron usually refuses to take food to Paradigm.  When he told me that he was eating sandwiches offered to him by others, I became so frustrated.  I tried to reason with him, but he wouldn’t budge.  Finally, with a degree of humor, I told him that I wanted to just resign from my Mom position.  I was tired, so just give me the letter of resignation and let me sign it!
Aaron turned and looked at me, and then started laughing…..thankfully.  It was one of those moments when I wished I hadn’t said those words, even in jest, so I was thankful that he saw the humor.
“You can’t resign from being my mom,” he slowly said.  “You’ll always be my mom.”
“Yes, Aaron, I’ll always be your mom,” I replied.  But some days…..
So last night, after he had been sick all day, I watched him getting his snake and frog and skunk positioned just right in his bed.  I watched him get his covers the way he wants them.  I watched him write down his time to bed in his bedtime log book.  I kept my distance.  No hugging because of germs, I told him.  He just stood and looked at me, then turned to get in bed with no usual goodnight hug.
“Mom?  Are you gonna take care of me if I did throw up during the night?” he asked.
There went the tug on my heart as I assured him that I would take care of him.
“So, like, if I throw up you’ll wash my face?” he hopefully asked.
Yes, dear Aaron.  I’ll wash your face.  I’ll look at pictures of Transformers Revenge of the Fallen.  I’ll see that you have THREE cups of coffee in your room.  I’ll see you through the rough days.
And I’ll tear up those resignation papers.  Because I do love you, no matter what.  And I’ll always be Mom.