Gary and I are far beyond the baby years, and we have no grandchildren yet, but we still sleep with a baby monitor beside us every night.  It sits on my nightstand as we listen for Aaron’s nocturnal seizures.  It sure is a handy tool to have!  Most of Aaron’s seizures are at night, in his sleep, so the monitor enables us to hear him and to go help him.

Aaron never remembers his seizures, which is a blessing.  But he has seen others have seizures at his day group, so he has seen what they can be like.  And he is well aware of how he feels afterward, with a terrible headache or nausea or waking up in a wet bed.  Sometimes he loses his sense of taste for a day or two.    It’s a reality of his life that he accepts remarkably well……probably much better than I do.

In the last couple years, though, Aaron has shown a degree of fear concerning his seizures.  He’s not one to sit down with me or Gary and verbally express his fears.  But every single night as we go through his bedtime routine, he asks me two questions.

Second:  “Mom, are you turning the monitor on?”

Sometimes I beat him to it and after our goodnight hug I answer those two questions before he can ask them.

“Good night, Aaron.  Sleep good.  I’ll see you in the morning.  Love you!  And it’s not going to rain, and I will turn the monitor on.”

But if I’m going downstairs to fix the coffee pot or whatever, Aaron always says, “Do you want me to bring the monitor down to you?”

And on many nights, just for extra measure, we will hear Aaron walking up the hall and barging into our bedroom if the door isn’t locked.

Sometimes when I’m extra tired I get impatient with this routine, and then I feel guilty about it.  That’s because I know why Aaron is so concerned about that monitor.  I asked him about it once, knowing that my questions can put thoughts into his head, but still wanting to hear what he had to say.  So I asked him if he was scared of having a seizure, and he told me that he was.  We didn’t talk deeply about it, but his answer was enough to pull at my heart and make me think as I often do about how I would feel if I was in his shoes.  Seizures are definitely scary, and Aaron most definitely wants me or Gary there with him if he has one.  Of course he does.  I would feel the same way.

So every single night, and also for every single nap on days that he is home, I make sure he knows that the monitor is on and that I am listening.

The monitor did its job last night…..three times, actually.  Aaron’s first seizure was a little after 11:30, and then two more followed during the early morning hours.  He’s sleeping on the couch now – has been for a few hours since he woke up before 6:30 to discover his condition, change pajamas, and make his way downstairs.  He took his morning meds and went right back to sleep, waking up awhile ago to ask for his cups of coffee, and then back to sleep again.  Seizures take such a toll on his body.  They take a toll on my heart.

But this morning…….as God always, always does…….my heart was comforted by reading from the book of Psalms.

“He who keeps you will not slumber.  Behold, He who keeps Israel will neither slumber nor sleep.”

I can hear me now.

“God, do You have your monitor on?  Are you listening in case I need you?” 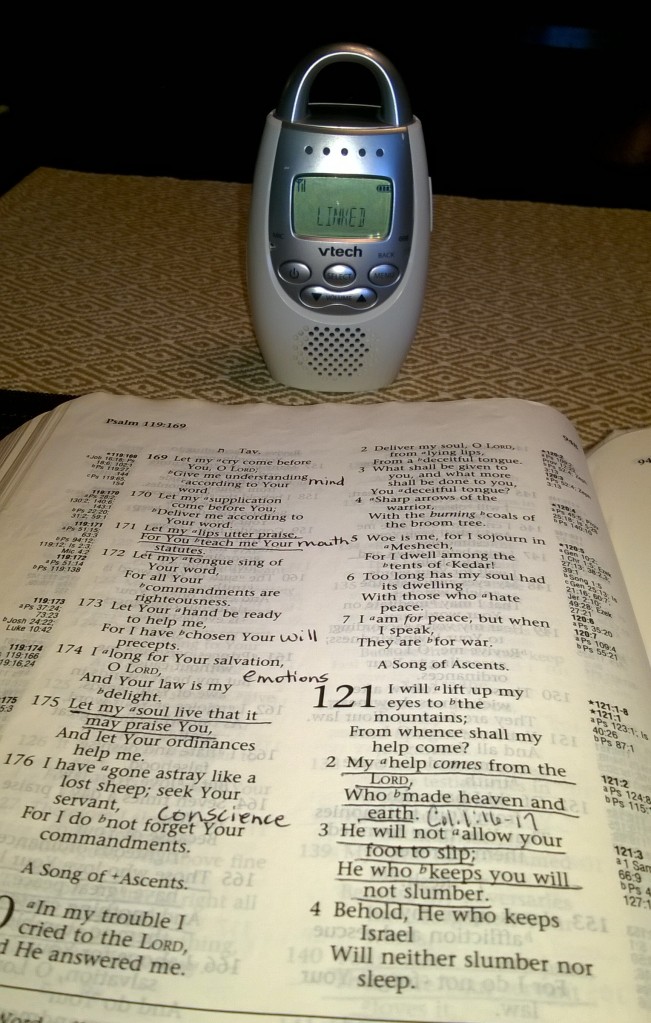 And God, Who is always patient with me, tells me once again that He doesn’t slumber or sleep.  Did you know that “slumber” means “nodding off?”  Like I do sometimes while Aaron and I are watching Wheel of Fortune…….and then Aaron yells, “MOM!!!  You’re not watching!!!”

But I don’t have to do that with God…..and neither does Aaron.  God won’t sleep deeply and He also won’t even nod off.  He’s standing by Aaron’s bed with me during every seizure.  Then He stands by my bed when I lay back down and try to go back to sleep, which is often hard to do.  He knows my fears for Aaron and He understands my hurt for him, but He also reminds me that His plan is sovereign……His plan is best……even if His plan isn’t understandable to me.

God’s just a very good Father to me and to Aaron, and to each of us who know Him.  Even if our view of Him is through our tears and our fears, we know that God is right there with us through it all.

4 thoughts on “God, Are You Listening?”