I’m a southern girl.  Well, from southern West Virginia – born and bred – so no matter what the Civil War folks say about my home state, I still consider myself to be from the south.

I guess that’s why sometimes I just want to look at Aaron when he’s being a particular form of disagreeable and just say, “MERCY!!  AARON!!”

And then tell him that he just needs to hush!!

When I talk to Andrea or Andrew on the phone, Aaron invariably barges in the room and wants to talk.  This happened on Saturday evening as Andrea and I were gabbing away.  I knew Aaron would persist until I caved, so I finally put the phone on speaker and off Aaron went.

He was particularly fixated on Luigi’s Mansion 3 – his newest Nintendo Switch game.  And he was even more fixated on going over Luigi and Gooigi.  I think I spelled that right.

Andrea, ever patient with her brother, commented on everything Aaron said.  She even asked questions…good questions…which fanned Aaron’s flames and off he blazed.

It took me awhile to put out the flames.  I usually have to end the talking by telling Aaron to say goodbye, after he has pushed me away several times from taking back the phone.

Never once does he ask about Andrea or Kyle, or Darcy or Oakley or Aries or Siggy…all dogs, by the way.  😊

For some reason on Sunday evening, Aaron kept referring to that phone call.  He declared that I only wanted to talk to Andrea…that I never talk to him (REALLY??!!)…that I would hardly let him talk to her…and so forth and so on.

Everything is bad to Aaron when he gets like this, including the fact that I am a bad mom.  I eventually shut down when this happens, meaning that I do not fan the flames of Aaron’s anger by things I say.  Even my eyes – “Don’t squint your eyes, MOM!!”…or my voice inflections, can increase his anger.

Aaron’s lack of empathy and his inability to connect the dots like we do is a most frustrating part of his autism.

The next morning, weary and bothered, I thought of how my friend – a manager at Aaron’s day group – deals with these issues on the day after they occur.  Aaron often doesn’t want to go to Paradigm on that “next day” after he has blown it, but Barb always reminds him of an important truth.

“It’s a new day, Aaron,” she says.  “We just start all over and don’t let yesterday bother us.”

Thinking of that…of a new day…reminded me also of the wonderful promise in Lamentations 3:22-23:

“The steadfast love of the Lord never ceases; His mercies never come to an end; they are new every morning; great is Your faithfulness.”

God’s love and mercy to me, no matter how much I sin, is new every morning.  And I know that I must also face every new morning with Aaron in the light of God’s loving-kindness to me.

If God is so loving and kind to me, how can I be any less to Aaron?

That next morning was still a little rough on Aaron’s part.  And then when I picked him up in the afternoon, as I watched him approach the van, I saw him stop and turn, running back into the building.

He returned, holding a paper that blew in the wind as he ran toward me again, his face all smiles. 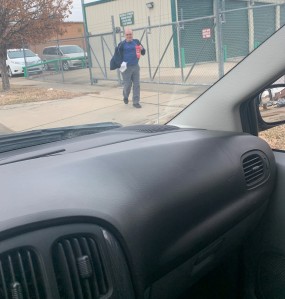 With great delight he handed me this picture: 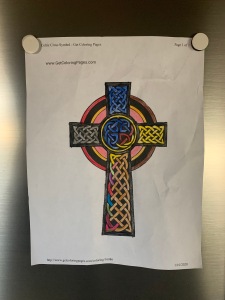 I was so touched.  So amazed.

Touched that he wanted to mend our fences in such a sweet way.

And both amazed and touched that it was a cross he colored for me.

You see, it’s because of the cross that I can even begin to love Aaron as I should, especially when he is at times so unlovable.

It’s because Jesus died for me, and because He is my Savior, that I AM loved and that I CAN love.

And I love how the old King James Version says that verse I wrote earlier.  “It is because of the Lord’s mercies that we are not consumed, because His compassions fail not.”

I am not consumed by hatred and sin or God’s judgment, but only because of God’s love and mercy.

Love and mercies that are new every morning.

Like I said, how can I love Aaron any less when I am so loved by God?

One more thing.  The cross is also the reason that I can bear the sadness and fear of Aaron’s 3:00 a.m. seizure today, and another one later.  The reason I can see him sleeping again now and know he may likely seize again.

The reason I can bear up under the disappointment of our doctor day being canceled…because doctor day means, to Aaron, eating out day.  And he does LOVE eating out!  It’s always a fun and happy day, but not today.

Aaron goes through these disappointments and rough days often, which means I do as well.

But like the verses above said, great is God’s faithfulness.  He doesn’t leave me to handle it all alone.  He is right beside me, my best friend, with His mercies and love that give me His peace that passes understanding.

Speaking of understanding, I won’t even go into all the detail of having to wash Aaron’s favorite fuzzy blanket today because he spilled coffee on it…and how it’s the only blanket that he wants to use on his lap when he’s at his desk…or on the couch.

About trying other blankets.

Checking his blanket in the wash.

Observing me putting it in the dryer.

Following me around the house because without a blanket he can’t sit or lay.