It all started one recent night when our almost-broken DVD player became the totally-broken DVD player.  Aaron and I were watching the next Blue Bloods show that was in Aaron’s rigid schedule for the evening.  Aaron kindly paused the program while I went into the kitchen.  Something about that pause became the something that pushed our ailing DVD player into its grave.  Even Gary, our go-to he-can-fix-everything guy, came but could not fix.  And as I watched Aaron’s frustrated reaction, I rightly guessed that he would also be very difficult to fix that night.

I was very correct on that one.

There are times when Aaron handles life’s interruptions of his routine with amazing calm and grace.  That night was not one of those times.

I didn’t help, either.  When Aaron became more belligerent, I became more frustrated.  I don’t do end-of-the-day meltdowns very well, especially as I get older.   I finally told Aaron not to be a bully.  But I didn’t end there.  I also told him not to be a bully brat.  I thought it had a nice ring to it, you know.

Aaron did not think it had a nice anything.

Now we not only had to go to bed without finishing our Blue Bloods show, and knowing that the DVD player was dead, but we also had to walk up our stairs for our goodnight routine harboring anger.  I could have made amends and gone right to bed with no problem.

And so began an age-old bedtime dance that we hadn’t done together in a long time.  It basically consisted of Aaron refusing to do what is normally done and insisting on doing what is unacceptable.

“I am NOT helping put the oil in the diffuser!”

“I am NOT taking my medicine oil!”

“I am NOT saying goodnight to you!”

“I am NOT letting you kiss me goodnight!”

I stayed as calm and flat as I could be in my reactions as I went about my own bedtime routine.  Aaron continued his fuming by going into his room and closing his door, only to open it seconds later.  He would stomp up the hall and come into my room, hurling another angry comment at me.  One time he closed his door normally, but immediately reopened it so that he could slam it shut the second time.  I had to smile at that one.

But I wasn’t smiling at any of the rest, for sure.  I was sorry it had come to this…I was very tired…and I was totally aware that Aaron’s outrage could continue for some time.  Therefore, I just went to bed, pulling my covers up and acting as if everything was normal.  Gary had not come upstairs yet, so I left my door open.

Sure enough, Aaron clomped up the hall again and came into my bedroom.  He didn’t even seem to blink as he saw me in bed and so changed his direction, standing on Gary’s side of the bed.  He glared down at me under the covers and continued his verbal barrage.  Then he was off, slamming his bedroom door before soon reopening it, and repeating the same action again and again.  In my bedroom, hovering over the bed as he angrily talked, and off again.  I don’t even know how many times this occurred.

Then all of a sudden, the next time Aaron hurried to my room to glower at me, he didn’t.  He didn’t hover and glower, but instead he sat on the bed beside me.  He started rubbing his hands together and then he said, “Mom, do you know what Nanomites are?”

And just as seriously as I possibly could, with no hint of surprise or laughter or tiredness,  I told him that I did not know what Nanomites are.  There we were, in the dim light, talking ever so diligently about Nanomites.  We didn’t talk about our anger…our hurt…our frustration with each other…our disappointment in the dead DVD player…or our needed apologies.  We talked about Nanomites.

And all was well.

Aaron went back to his bedroom.  I stayed in bed, waiting.  Soon he was headed back up the hall, but this time he came around to my side of the bed.

A couple days earlier, I had taken Aaron to Dollar Tree.  You would have thought I had let him enter heaven for a few minutes.  He bounced from aisle to aisle, SO excited by his many finds, but definitely the MOST excited by this big, plastic, long-tailed, red-eyed rat! 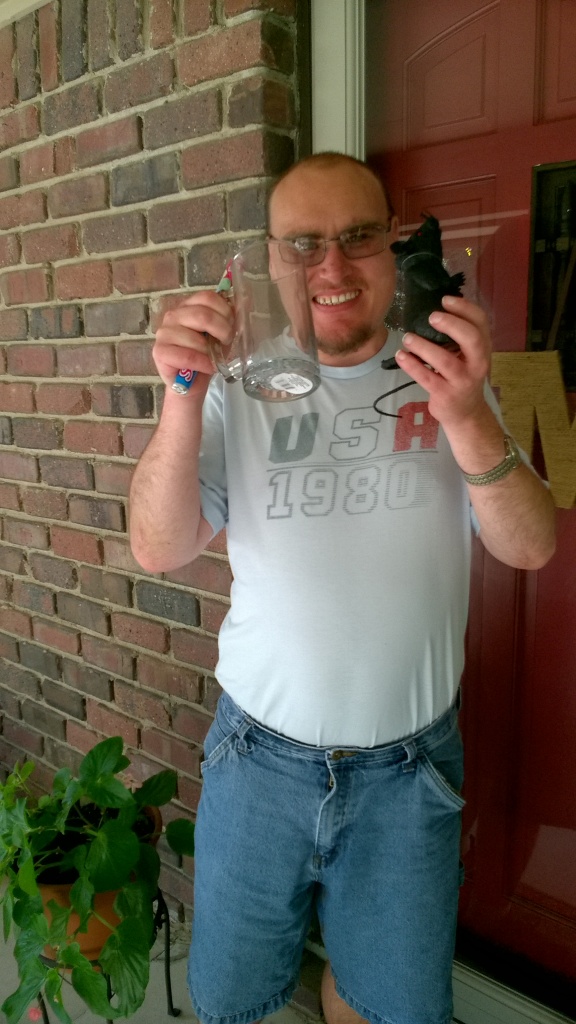 I rolled over in bed that night, and there on my night stand was that long-tailed, red-eyed rat.  I knew as sure as ever, then, that things were right with me and Aaron.  He had given me what at that moment was most precious to him…his black, plastic rat. 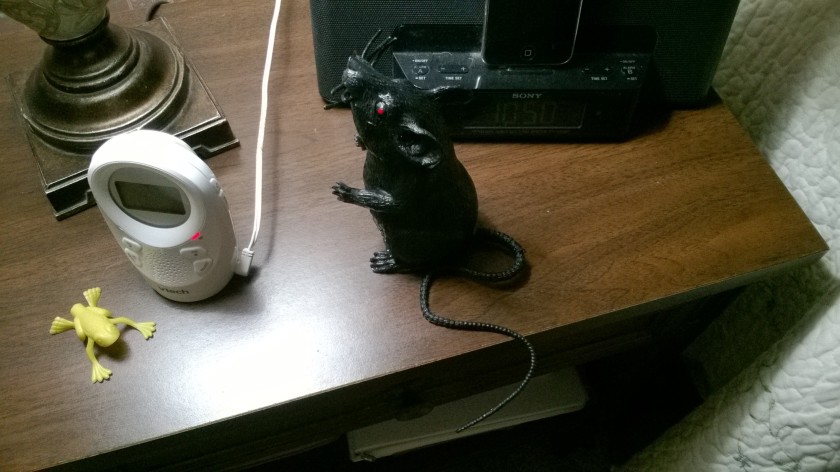 He laughed and bent over as he rubbed his hands together…a sign of his pure joy.  And I thanked him.  I thanked him as sincerely as if he had placed a huge vase of roses on my night stand.

Aaron wanted me to come and say goodnight in the way we always do, so I did.  Then as I was in my bathroom right after that, I heard Aaron once again walk up the hall.  He knocked on the bathroom door, and when I answered he said, “Mom, I’m sorry.”

“I love you,” he mumbled as he hurried off and back to bed.

I kept that ugly plastic rat on my night stand for a couple days.  It reminded me of so much.  It was an unusual picture of my relationship not only with Aaron, but also with God.

How many times have I been angry with God over a problem or a situation in my life?  Maybe not even full-blown anger but frustrated and not trusting Him totally.  How many times have I held onto hurt, or worry, or fear, or whatever else it may be that I want to harbor close to me.  Things or people or events that I don’t want to relinquish to God?

All the going back and forth with God doesn’t accomplish a single thing.  It’s only when I yield to Him and to His control in my life, tell Him I’m sorry if I need to do so, and then give Him my thing that to me is precious…that I want to keep and coddle…only then will I have true peace.  Also, only then will I have open communication and sweet fellowship with God again.  Only then will I see what’s on the new path upon which He has set my feet.

Who knew what that silly red-eyed black plastic rat would teach me?

Leave it to Aaron…and to God…to take the bad times and make them full of good.