Skip to content
Aaron came home from his day group on Thursday, June 11, in his usual way, bounding in the hall door from the garage with talk of what he had done that day at Paradigm.  It was later, as I stood in the kitchen fixing supper and he sat in his family room chair, that I noticed him coughing.  It was just a dry cough, nothing major, but it was persistent.  So I leaned around the corner and asked him if he was all right, and he answered in his usual droll way that he was just fine.  But as we ate supper awhile later, Gary and I noticed that he was very slow.  A couple days earlier, on Tuesday, Aaron had four seizures.  That wasn’t unusual for him, but on Wednesday he was himself again.  To be more lethargic on Thursday was concerning to us.
During Wheel of Fortune he wasn’t animated or excited at all.  I felt his forehead and noticed how warm he was.  Sure enough, when I took his temperature it was 102.4.  The next morning I called McConnell Air Force Base to make a same day appointment.  Aaron kept sleeping until I finally went in his room and roused him enough to take his temperature again.  It was still 102.4.  He had a very hard time waking up enough to take his morning pills, and then went right back to bed.  As I continued to check on him I became very concerned at how he couldn’t wake up, so I finally made the decision to take him to the ER.  McConnell agreed with me, so I worked to get Aaron awake enough to dress.  I then had him sit on the floor of the hallway upstairs and scoot down the stairs on his bottom.  He would scoot down one stair and fall asleep until I jostled him……then scoot down another stair and fall asleep…..all the way down the stairs.
We slowly made it to the van, and later at the ER a male nurse helped Aaron out of the van and into a wheel chair.  Still he slept.  We got him on the exam table and he slept again.  Somehow he stood up for a chest X-ray, but he slept through the doctor’s exam, the blood draw, insertion of the IV, and even the catheter.  The doctor found an ear infection, so I thought that Aaron’s body was just fighting hard and the sleeping was his reaction to that.  I felt like we would soon leave with an antibiotic prescription, go home, and get Aaron well.

Yet the concern on the doctor’s face as he kept coming in the exam room was raising my own concern as well.  Finally he told me that the blood work had shown Aaron’s sodium to be dangerously low.  It should be at 135-136, but Aaron’s was 121.  Then he said that Aaron would need to be admitted to the hospital to address the sodium issue, and to find out what else was going on with him.  My mind was whirling as I called Gary and as we tried to decide if Aaron would stay at St. Teresa Hospital or go elsewhere, although that decision was made for us by insurance.  We would stay at St. Teresa.  It wasn’t long before we were on an elevator headed up to the small ICU unit, my mind still trying to adjust to all this.  I looked down at my very sick son and wondered about the “what else” that the ER doctor had mentioned.  What else was going on inside his body?

There Aaron lay, all hooked up to monitors and tubes, his body struggling against that unknown something that was making him so sick.  He tried hard to wake up enough to answer nurse’s and doctor’s questions.  He sometimes showed his definite personality, like when the nurse asked him a question about his bowel habits.  He gave her a rather disgusted look and just answered with a “Hhmmpf!”  When Gary was there, and I left later that evening to run home, Aaron asked me to bring him his watch and his glasses.  He didn’t wear his glasses a lot during those first few days, but he put his watch on his arm right away, pushed way up the way he likes it.  It was a piece of normalcy in this crazy place in which he found himself. 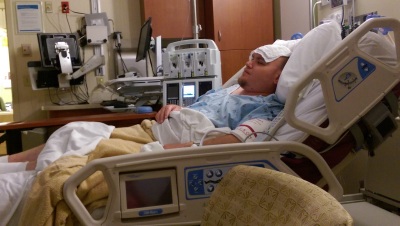 Over the weekend, when friends came to visit, Aaron would cry.  He showed emotion that was rare for him.  He told me later that he was sad.  I told him that we understood, but I didn’t tell him about my own sadness.  Or about those icy fingers of fear that were trying to grab at me.  It was not only sadness but fear I was feeling as I watched the blood draws…..the strong antibiotics flowing through the IV into Aaron’s body…..the fevers that sometimes rose to 104.5……the CAT scan…..the X-rays…..the spinal tap……the kidney specialist and the infectious disease doctor…..the testing for West Nile and tick borne disease…..the low sodium issue. 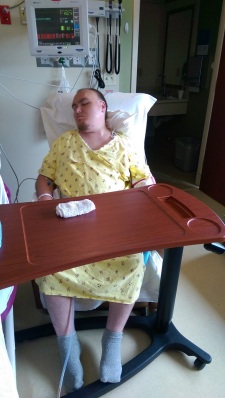 Early on Saturday morning, as I have done many times in the past during stressful times, I asked God to give me a special verse.  I asked Him to speak to me in the way that I needed at this time.  There in that hospital room, with Aaron sleeping nearby, God gave me Ecclesiastes 11:5:  “As you do not know the way the spirit comes to the bones in the womb of a woman with child, so you do not know the work of God who makes everything.”  That was it!  I didn’t know what was going on here with Aaron.  I didn’t know the work of God but I do know God.  I know that He loves us and I know that He has a work that He is accomplishing.  I know that I can TRUST Him, regardless of what else I don’t know.

It was very hard to watch Aaron suffer.  Hard to see the pain in his face when he coughed….the struggle to deeply breathe and to talk……the pain of needles and tests.  It was easy for me to let fear take over as I helplessly watched our Aaron and wondered still about the “what else” that was so elusive to find in his body.  Soon another principle from scripture came to my heart.  “In everything, give thanks.”  I went home one evening while Gary sat with Aaron, and I knelt by Aaron’s empty bed in his bedroom.  His stuffed snake and skunk were still in the bed where he had left them.  I stretched my arms over his animal print blanket and I asked God to please heal our son.  I told God that I didn’t know about this work that He was doing, but I did trust Him.  And I thanked Him for this time.  That kind of thankfulness takes great trust in the One whom I was thanking, for sure, because I hurt for Aaron so deeply.  But I also know God and I know that He can be trusted.
It was a turning point for me.  My mother heart still hurt deeply all through that week in the hospital.  One night, with eyes closed, Aaron said, “This is not fun.”  There went my tears.  And later, eyes still closed, he said, “I love you, Mom.”  I leaned over his bed and he got as big a hug as I could give him.  But I purposely stood there and voiced thankfulness to God, hard as it was, for this work that He was doing and that I didn’t understand.

Aaron’s chest X-ray finally showed pneumonia in his right lung.  It was determined that he had Aspiration Pneumonia.  Apparently, he aspirated some saliva during his seizures that previous week.  He responded to a new antibiotic, was moved out of ICU to a private room, began walking with the help of physical therapy, and was soon clamoring to come home.  I don’t know who had the bigger smile, Aaron or his doctor, when he was finally told that he could go home.  On Friday, a week after being admitted to the hospital, he was wheeled out to our van and we took off for home…..after picking up his choice of McDonalds for lunch on the way.  He is recovering his strength and his spirit, and some grouchiness, too.
There is more to write about this experience.  About how Aaron’s autism affected his hospital stay, and about his tender return home to his world and his routine.
We’re so thankful for this outcome, but if it had been different, I pray that we would still be thankful.  Thankful for the work of God who makes everything, even when don’t know or understand His work.  When it’s all said and done, there is no better place to be than in His will as we watch His work and trust in Him.

One thought on “Aaron’s Hospital Stay”