Skip to content
I just have to quickly share with you a perfect autism moment with Aaron that I had yesterday.  One of the characteristics of autism that Aaron sometimes displays is that he doesn’t always understand jokes or irony.  We had the funniest display of this yesterday that I’ve seen in a long time.
He stayed home yesterday because we had an appointment with his state insurance representative.  I decided to make a quick trip to Dillon’s, and of course Aaron went with me.  I told him that he could have his favorite Cheddar Pasta Salad for lunch, so he was very happy as we walked into the store.  Aaron always gets a large container, by the way.  That’s important to remember.  Oh, and it’s also important to remember that yesterday was Friday.
We waited for awhile at the deli counter before an employee walked up behind us on her way to help us.  Aaron was a tad impatient at having to wait, and was just ready to order his large salad.  As the lady asked what we wanted, Aaron ordered in his usual way.
“Can I have a large Cheddar Pasta Salad?” he asked.
“Only if it’s FRIDAY!” she answered Aaron, with a big smile as she enjoyed her little joke.
And Aaron just stared at her.  He didn’t smile.  He didn’t laugh.  He only stared at her as if she had three eyes.
I knew exactly what he was thinking.  He was thinking that this woman was dumb.  Of course it’s Friday, he thought.  What is she talking about and why is she smiling at what she said?  It’s just dumb.
Then Aaron gave a little grunt because he suddenly realized that something was expected of him, but he didn’t know exactly what that was.  So he gave a small grunt of acknowledgement as I chuckled and said something about how funny that nice lady was.  What I really wanted to do was bend over and begin a loud belly laugh, but I knew that would only frustrate Aaron further, so I resisted.  And the look on the poor woman’s face was pretty priceless, although I felt a little sorry for her.
Then it got even better.  There were no large containers on this Friday, so the lady said that she would fill two medium containers.  Oh boy.
“But I want a large,” Aaron told her.
I then told Aaron that two of the medium containers equaled one of the large containers.
The nice lady began to fill a medium container.
“But I want a large,” Aaron repeated.
“Well, we don’t have a large but I’ll fill two mediums,” the lady repeated.
Aaron watched her closely as she filled the first medium container.
“I wanted a large,” Aaron said.
“Aaron,” I said, “two mediums are the same as one large.”  I then pointed to the sample containers on display to prove my point.
“I can’t have a large?” Aaron asked.
Sigh.
“Look, Aaron,” I said.  “You’re getting the same amount in the two mediums as you would get in a large.  Maybe even more!”
He was quiet as the worker finished filling the second medium container.  She handed them to us and wished us a happy day, saying nothing that time about it being Friday.  Smart woman.
I put the two medium containers in our cart.
“So she didn’t have a large?” Aaron asked.
Sigh.
We walked off as I expounded on the wonderful qualities of getting two medium containers.
“But they didn’t have a large container?” Aaron asked.
I quit counting how many times during that short shopping trip that Aaron repeated, “She didn’t have a large container?”
Up one aisle and down another, Aaron was trying to process having to eat out of two medium containers instead of one large.  Not even getting a bag of Starburst jelly beans deterred him from talking about the absence of his usual large container.
In this one little excursion to Dillon’s, I saw the complexities and the rigidity of autism in two distinct ways.  It doesn’t matter how long I live with Aaron, it’s always amazing to see how his mind works.  Plus it’s often downright hilarious.
And not “Only if it’s FRIDAY!”  HaHaHa!
It’s every day with Aaron! 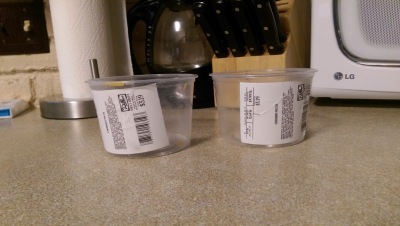