My phone rang the other day and even before I looked, I pretty well knew it would be Aaron making his daily call from Paradigm, his day group.  Yep, there was Aaron on the other end of the call, talking the second I said “hello.”  He was excited and laughing about Chris, one of the Paradigm staff.

“Mom!!  Me and Chris are playing a game where I can’t talk!”

Well played, Chris, well played!   I just thought this.  I didn’t say it to Aaron.

I laughed as well.  In fact, it felt very good to be laughing with Aaron.  I never know when I pick up the phone in what condition I will find Aaron.  Happy, sad, mad, crying, excited…I never am sure, so it’s with some dread that I answer his calls.

I had reason to feel dread this week because Aaron has been in a state of some anger and belligerence for awhile now.  We’re not totally sure of the why, but we are totally sure that his ups and downs are tiring to us and to his staff and friends at Paradigm.

This past Monday morning was rough at home.  I always let Aaron decide if he’ll go or not, knowing that forcing the issue is a recipe for disaster.  But Aaron also knows that if he does go to Paradigm then he gets extra treats and his meal of choice over the weekend.   He nearly always decides to go, but my reward system can also come back to bite me because the reason he goes is sometimes just for the future reward, and this stresses him to the point of bad behaviors.

Sometimes it’s just a perfect storm for a stormy day from Aaron!

Monday was that day.  Anger at home…then a calming…a fun ride to Paradigm because his music cheered him…and my last admonishment as he left the van.

“I can’t make you any promise,” he seriously replied.

And I had to laugh at that as he walked away.  He was borrowing my often-used phrase when he tries to pin me down to doing something at a certain time, and I tell him I can’t make a promise.  How well he listens and mimics when it suits him!

Tuesday saw more issues at home, though not as severe as the previous day.  I was encouraged by his good day at Paradigm, but our evening at home hit bottom again.  He was not happy that Gary and I talked to our daughter on the phone before supper, in our bedroom with the door locked so that Aaron couldn’t come in and interrupt.  Aaron was very rude before supper and during supper.  Tough love ensued, ending with Aaron’s Cheddar Pasta Salad being taken away by Dad before he was through…and all his snacks being bagged up by Mom and put inside the locked van.

Aaron finally calmed down as the evening progressed.  He turned a corner, looked at me as we watched a show, and surprisingly…and nicely…said, “Mom, I’m sorry.”

But the snacks stayed in the van, a test of his sincerity.

The next morning, yesterday, saw him irritable again and not wanting to hurry out of bed or hurry to get himself ready.  I don’t tell him to hurry – I’ve learned better – but he knows the underlying theme.

Oh, Aaron!  I want to both laugh and cry when he talks that way!

So, this morning, we were getting ready to go to his yearly support plan meeting.  Again, he was sleepy and frustrated, and dreading this meeting.  It helped that we meet at Carlos O’Kelly’s and get to eat out, but Aaron still does NOT like meetings.  He wonders if he can stay at Paradigm, can he stay at home, and all sorts of other concerns.  I felt bad that he was scared so I assured him that things are staying the same for now, but still he was on protective mode.

“Mom, I’m telling them that you and Dad are starving me!” he declared, threatening to tell them about the locked away snacks.

Again, I didn’t react and told him he had every right to do just that.  But at the meeting, as he chomped down salad and chicken fingers and French fries, he was happy and loud and talked away at everything except his starvation.

As we signed papers today, I laughed at Aaron’s signature.  This is his very favorite way to sign his name.

Aaron has such a very hard time playing by our rules…the societal rules that dictate how we talk to others and respect others and give and receive love.  Try as we might, we cannot get him to tell us why he’s unhappy…at least not if his emotions are coming from someplace other than the fact that his snacks are locked away or he can’t stay home on his computer all day.

Aaron can convey plenty of facts.  What he can’t convey easily are his emotions…his deep-seated reasons for his angry actions.

Gary and I know this about Aaron, but sometimes it’s hard to remember it in the heat of battle.  That’s when we need to back away…take a deep breath…lean on each other and God…and remember one more thing.

He’s cool when he tries to sneak another notebook in to Paradigm to give away, knowing he’s not allowed to do that.

He’s cool when he leans against my legs after he’s been so angry.

He’s cool when he’s trying to feed an ant on the table at a restaurant. 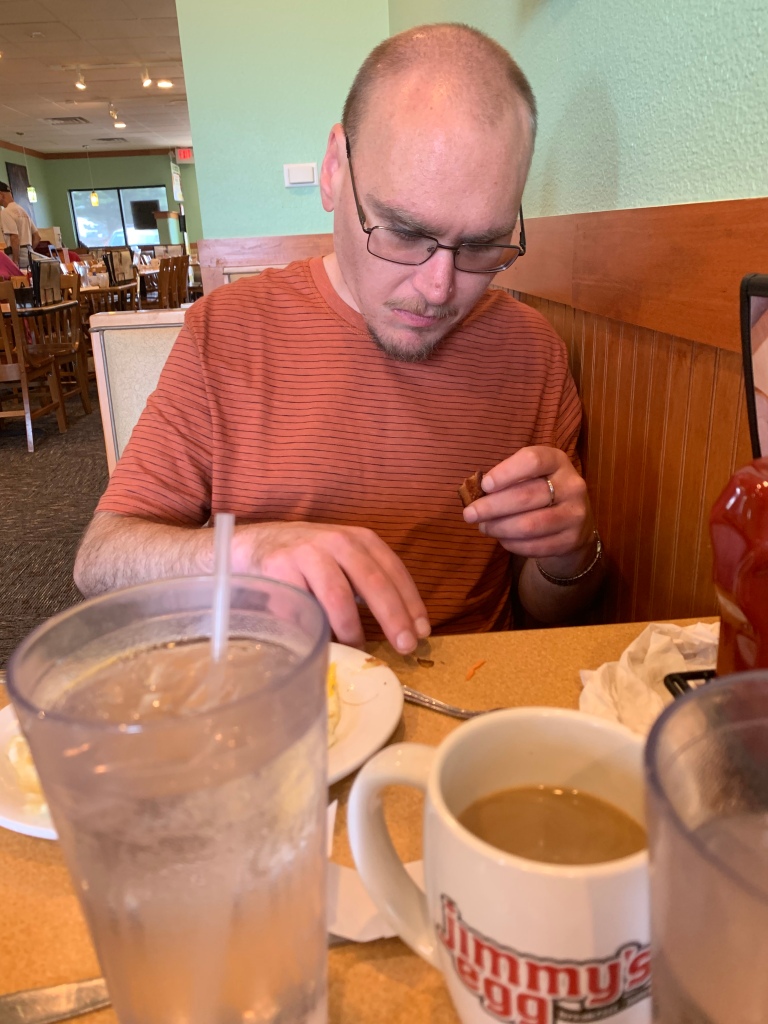 He’s cool when he’s “drying the bubbles off,” as he says.

He’s cool when he says, “MOM!!” at the grocery store and laughs and laughs at my reaction to him holding my LEAST favorite creature!!

And in so many other ways, our unique Aaron is very cool, even when he makes me lose mine.

Let me remember that, Lord, in the heat of the moment.

Let me remember that you crafted and created Aaron’s coolness.