One of our worst fears was realized on Saturday, March 2.  I mean, far worse things could have happened, I know that.  Yet it was a very scary day for us.

Aaron started up our stairs from Gary’s study, but had only taken a couple stairs – best we could tell – when he was hit by a drop seizure and fell backward.  The crash was startling!  Gary was nearby and I was in the kitchen at the top of the stairs.  We both immediately knew what had happened as we heard Aaron seizing.

It was a blur of blood, and panic (from me!), and fear and realization that Aaron was hurt.  He had hit a file cabinet, actually bending the bottom metal handle…with his head!  We got him to our nearby ER as soon as he could walk, which happened fairly quickly.  Aaron was coherent and I had finally calmed down, and Gary was his always strong presence – thank God!!

I’ll write more about that day later, but after our pastor’s Sunday morning message yesterday, my mind was drawn back to one of the scenes from that day in the ER with Aaron.  Poor Aaron had a huge gash in the back of his head.  We knew he would need staples.  Thankfully, the CAT scan showed no other head or neck damage.  Finally, it was time for the staples to go in.

Aaron had never had staples up to this point.  Aaron is one tough young man.  He’s endured so much over the years with his seizures.  But these staples scared him, for reasons I’m sure all of us can totally understand.

He rolled over on his side, face away from me.  So, I went around his bed and I knelt beside him, my face close to his.  I held his hand, and I rubbed his arm and face.  The first staple penetrated his scalp.  Aaron flinched and closed his eyes.

He kept his eyes closed for the rest of the procedure, grimacing with each staple.  I so much wished that I could trade places with him!

“What more must he go through?” I thought.

“Ow,” he softly said a few times.  But Aaron was calm, strong, and so brave…despite the pain that I’m sure radiated through his head, not only from the staples but from the hard hit.

Later, as Aaron talked to various people and at various times about his experience, I noticed that he talked about me being beside him.  Even though his eyes were closed, and he couldn’t see me, he knew that I was there as I talked to him and patted him and assured him that everything would be fine.  It meant more to Aaron than I realized.

Pastor Bob’s message yesterday at church was on Psalm 23.  We all know this Psalm, including verse 4:

“Even though I walk through the valley of the shadow of death, I fear no evil, for You are with me…”

As we walk with God, through whatever valley He leads us, He is with us.

As I walk with God, through whatever valley He leads ME, He is with ME.

God is with me.

Whatever my valley.  My sadness.  My fear.  My uncertainty.  My questions.  My anger.

I can imagine God stroking my face as my eyes are clinched tight, trying to block out the pain of my situation.

I can see Him holding my hand as He leads me on an unwelcome path.

I can feel His arm around my shoulder as He leans into my world, urging me to lean into Him and His strength.

You are with me.

And I am not alone. 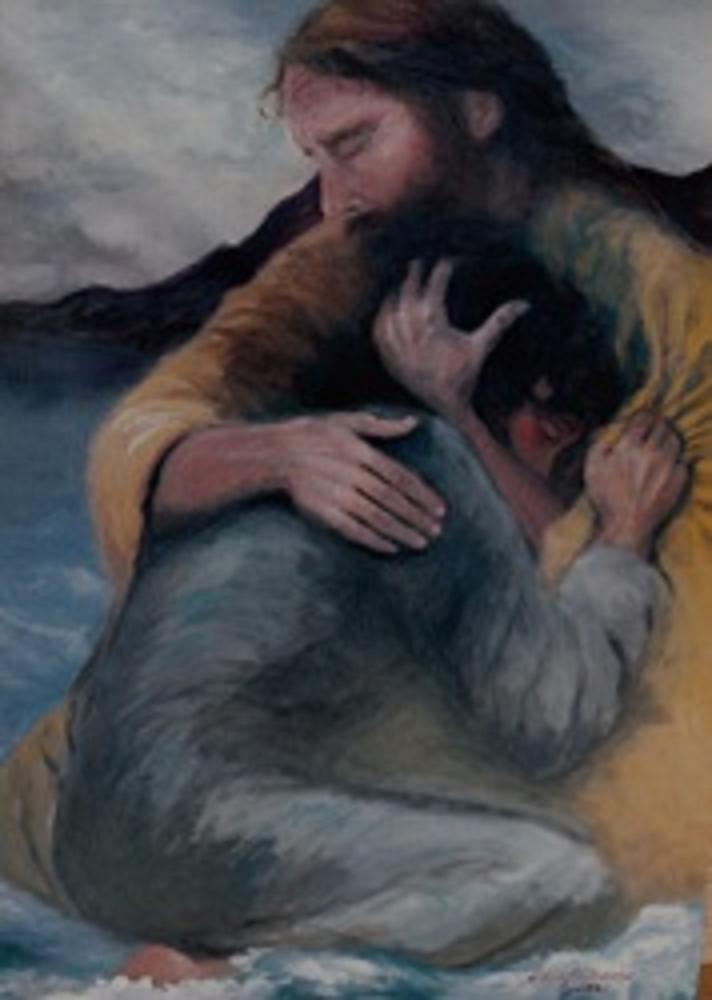