Early yesterday morning, before the rush of the day started…and despite the fact that Aaron was up early and had already interrupted me a few times…my thoughts turned to Mary and Joseph.  I tried to brush away the typical nativity scenes that are so much a part of this season.  I tried to imagine what the reality was for this very young teenaged couple on the night that their special baby was born.

The word that kept coming to mind was the word “alone.”  I do believe that God’s presence was with them…that they truly knew they were a part of God’s miracle in bringing His Son into the world…and that they were fully committed to His plan for their lives.  But as far as we know, on that night during the birth of Jesus, they were alone.  There may have been a midwife called, but there is no record that any of Mary or Joseph’s family was with them.

A normal birth in their small town of Nazareth would certainly have involved several women who would stand watch with Mary, helping her through the birthing process and calming her fears.  The first birthing experience for any woman is often full of questions and an element of fear.  Older women, especially her mother, would have been a great comfort to Mary.  And a midwife would have assisted in the birth in many ways and would have allayed fears with her expertise about unexpected complications.

But God had brought Mary and Joseph far from their hometown of Nazareth during this most important time.  And there they were, in a cave, far from family and familiarity, giving birth to a tiny baby…God’s Son.  Alone.

Then I remembered something.  I remembered our little snowmen perched on the ledge between our kitchen and family room, where they sit every Christmas.  Each snowman holds a letter, and when put together they spell the word “Noel.”  But a couple weeks ago, Aaron rushed to find me.  He bent over, laughing while he rubbed his hands together…a sure sign of great delight.

So, I followed him to that little ledge, where he pointed out with huge excitement the fact that he had rearranged the little snowmen.  Here is what they now spelled: 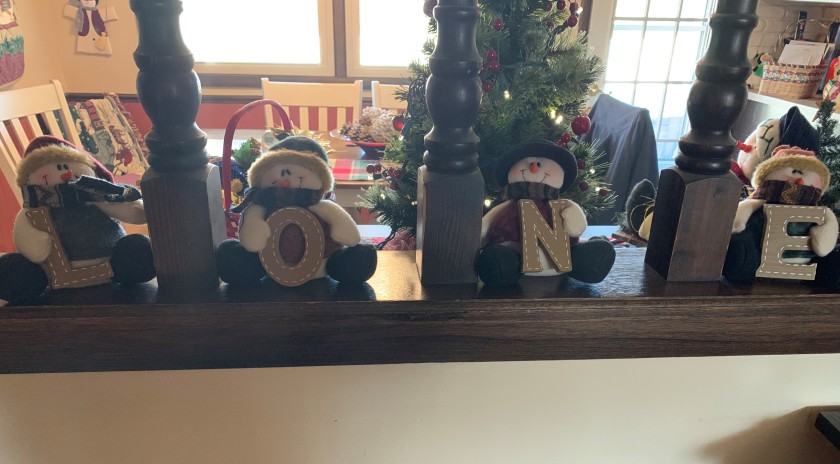 I haven’t even changed the snowmen back to “Noel.”  I honestly keep forgetting to do that, or to have Aaron fix them.  But now I’m glad I didn’t change them.  I’m glad for this reminder of where God often takes us when He puts us on the paths He has chosen for us.

We don’t always consider the price that Mary and Joseph probably paid for their obedience to God.  Imagine the hushed whispers when word got out that Mary was pregnant.  Unmarried Mary.  Imagine the looks she and Joseph got…the insinuations…the assumptions.  The suspicion surrounding them, and their story, probably lasted their entire lives.

I wonder how their situation…their obedience to God…affected their relationships to both their parents and siblings?  Then Jesus was born, while they were alone and far from home, and history shows that Mary and Joseph must have stayed in Bethlehem.  Several years later God sent them to Egypt for protection from Herod.  Did it look to some like they were running from their secret?

When they returned to Nazareth some years later, did they fit in to their families again?  Were relationships strained?  Did the rumors continue?

We don’t know for sure, but we can imagine…in that culture…that life wasn’t easy for Mary and Joseph.

When the angel first told Mary that she would become pregnant with God’s Son, I wonder if these thoughts crowded into her mind?  The cost to her reputation and her dignity would be huge.  But Mary’s response was: “Behold, the bond slave of the Lord; may it be done to me according to your word.”

I look at this story, and the nativity scene, in a very different way when I really stop to ponder these things…ponder to some degree as Mary did in her heart.

Each of us who follow Christ are on the path of His choosing for us.  Often the way that He leads us is unpleasant and troubling, full of fears.  But those very circumstances are what grow us and cause us to fall on God in faith.

The reality of our various situations isn’t all sunshine and roses.  It’s the daily pain and sadness and worry, though, that draw us to God like nothing else does.  In the hard times may we be like Mary and Joseph.

“May it be done to me according to Your word.”

Then just watch God’s peace fill your heart and His grace give you all you need to face the particular plan God has for you.

One thought on “A Lone Christmas”