Aaron LOVES listening to CD’s when we drive places…and yes, we still use CD’s in our van, and sometimes in our kitchen, because we’re old and our van is old and Aaron LOVES CD’s.

Why does he love CD’s?  Well, he can hold the case and look at the title of each song that is playing, as well as the number of the song on the back of the case.  This is orderly and sensible, which makes great sense to Aaron.

It’s pretty hilarious, actually, to watch Aaron go through this process, and to hear his voice.  He watches the CD player in the van, for instance, and as soon as the number of the song pops up, he then repeats the number to me and tells me the song title.  It doesn’t matter that I haven’t asked for this information.  He gives it anyway.

The current CD that we are playing becomes his sole focus for however long it takes us to finish this CD.  It’s usually several days, so for that period of time we hear all about the singer or the group.  Again, it doesn’t matter that we haven’t asked for this information.  We will get it anyway, an any time of the day or night.

At this moment in time, Aaron is listening…again…to Ronnie Milsap.  He adores Ronnie Milsap.  He knows all about Ronnie Milsap…where he was born (near Gary’s hometown!)…his childhood…his blindness…and definitely his songs!  And I can’t tell you how many times Aaron has said, “Mom, when Ronnie Milsap sings, he goes like this!”  At which time Aaron jerks his head around just like Ronnie Milsap does, because Aaron has watched him on YouTube and has keenly observed Ronnie Milsap’s head jerking and swaying as he keeps time to the music.  But when Aaron copies those movements, it’s quite hilarious…and to people in cars beside us, it’s probably quite puzzling. 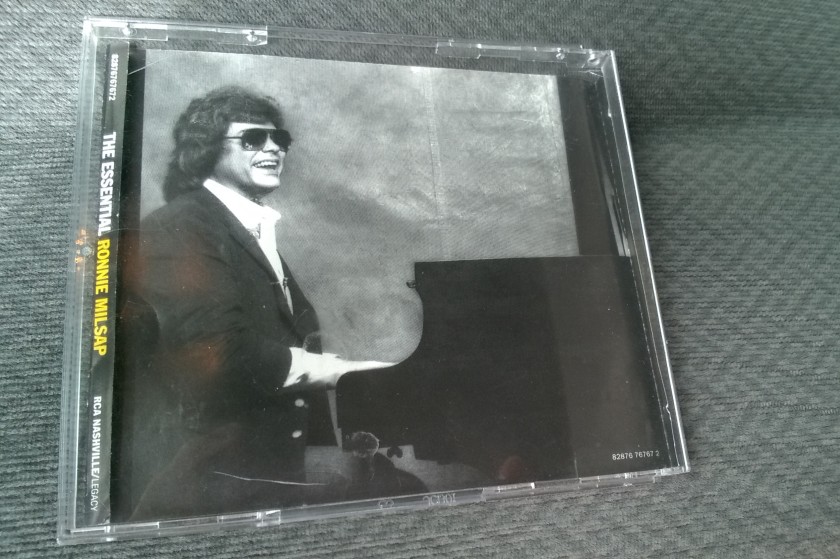 Another musical trait that Aaron displays, proudly and loudly at times, is to sing a main phrase of the last song that he has heard before we exit the van.  There was the day, etched into my memory, when the last song that was playing before we entered Wal-Mart was Shania Twain’s classic, “Man!  I Feel Like a Woman!”  So yes, Aaron walked around Wal-Mart singing…more like saying…with his unexpressive and flat voice, “Man!  I feel like a woman!”

That was a very interesting day.

Aaron had a doctor appointment today, so I decided that it was a good day for a morning haircut and beard trim on our way to lunch.  We drove to Great Clips, and on our way Ronnie Milsap was singing.  Aaron reached down between our seats to grab the CD, look at the number displayed on the CD player, and then match the number to the title index on the back of the CD box.

“Number 6,” Aaron intoned.  “All Together Now Let’s Fall Apart,” he read with no expression.

We soon sat in Great Clips after confirming our on-line check-in.  Aaron was ready for his hair cut NOW, but I told him that we needed to sit and wait…that it wouldn’t be long.

Soon another customer entered and walked up to the counter.  Aaron immediately thought that she would delay his haircut.  In disgust, he uttered his favorite saying lately.

So I began tickling his back, which always calms him, and sometimes gives me hope that he’ll be quiet.

Then another customer entered.

Now I was REALLY tickling his back, pushing him down so that I had better access, and also so that his face and mouth were facing the floor!

He then decided to sing.

“All together now, let’s fall apart,” he spoke/sang in his usual monotone.

No joke, I thought!!

But soon his hair cut was done, lunch at Longhorn was happily completed, and we ran home for a few minutes.  I needed to let Jackson out to potty, and I also had another chore to do…a bit of a yucky one.

Aaron had informed me, just before we left for Great Clips, that he MIGHT have wet a little…maybe just a little…in his bed during the night.  It wasn’t a seizure, but instead a result of TOO much water before bed.  He has been read the riot act on that, by the way.

More of the story and the extent of the damage was found just before we left, with no time to clean it up.  I couldn’t stay too irritated for too long, though, when at Longhorn Aaron agreed to ask the blessing before we ate.  He stretched his hand across the table for me to hold.

How could I stay mad?

So at home, I gathered up his bedding…ALL of it…his many covers included.  I examined the carpet, and then knelt down in the tight spot between his bed and the wall.  The spray bottle wouldn’t work at first, but eventually it did.  But my legs wouldn’t work well, either, as I struggled to get up.  Just then, I heard Aaron at his desk…singing…

“All together now, let’s fall apart,” he once again flatly sang.

He has no idea how my loud laughter made getting up off the floor even harder!!  And how much it helped dissolve my frustration.

I have two Ronnie Milsap songs that I have decided are Aaron’s songs, though he is clueless about them.

The first one was playing in the kitchen last night.

But it’s a PERFECT song for YOU, Aaron!!  There’s no getting over you!!

And I don’t want to, either!

The second song?  It was playing when we pulled into the driveway after his doctor visit today.  It’s on the second CD disk, in case you’re wondering.

“Number 1,” Aaron said, of course.  “I Wouldn’t Have Missed It For The World,” he finished.

One thought on “Singing We Go”