This past Saturday, I took advantage of the beautiful weather and spent some time in the garden.  I ended up with a large bucket full of tomatoes.  Our tomato plants have produced beautifully this year!  It’s certainly the best tomato year we’ve ever had.  I’ve canned quite a few quarts, and as I looked at my overflowing bucket I knew that there would be more canning soon to come.

Aaron was in a very happy mood over the weekend.  One of his favorite staff from his day group came over for pizza on Friday evening.  When he left, Aaron got to spend some time petting our neighbor’s cat, Dallas. 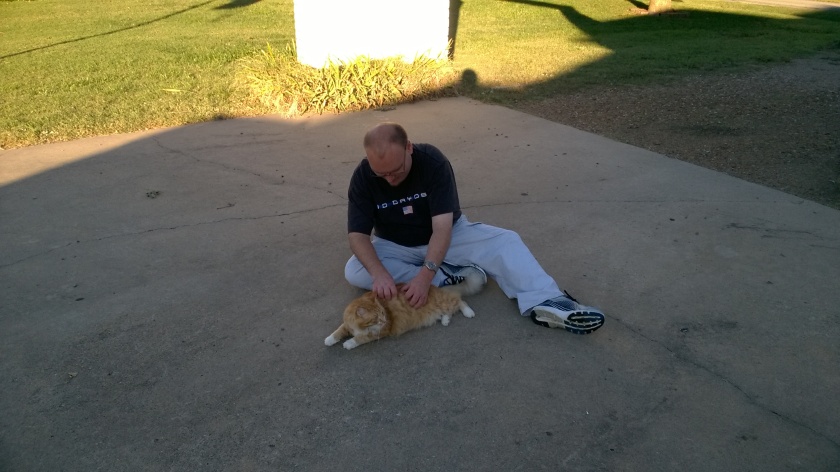 There was a favorite television show to watch that night, too.  And the next day there was time outside, time playing Skip-Bo, and tacos for supper that night.  It doesn’t get much better than that!  Simple joys are sometimes the best joys.

Aaron was in such a helpful mood on Saturday, too.  He helped me cook the tacos and set the table.  And then he offered to help me wash the tomatoes from the garden after supper.  We got them all cleaned up, with Aaron stacking them higher and higher on the counter.  We laughed when four of them fell on floor and we had to reposition the tomato tower. 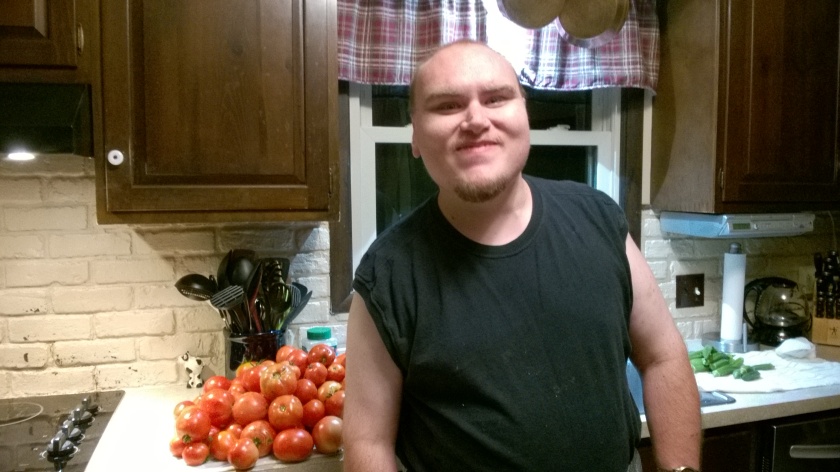 On Sunday afternoon, Gary and I had hoped to take Aaron to a corn maze.  However, Aaron started complaining of a sore throat.  We could also tell that he was getting a cold.  We’ve learned not to tell him in advance that we might go somewhere, just in case it doesn’t work out, so he was none the wiser when Gary and I cancelled the corn maze idea.

On Sunday night…..actually, early in dark morning hours on Monday……Aaron had a seizure at 1:20.  Then another and another, until finally he ended up having five very hard seizures in five hours.  He was already struggling with all the head congestion, so the seizures were a little scarier than usual.  He bit his tongue and wet his bed – all the bad stuff that points to hard seizures.

He slept all day yesterday, Monday, on the couch while I washed all of his bedding.  When he did awaken, he sounded terrible because of his congestion and his swollen throat.  He was running a fever.  He was terribly weak, the seizures having taken quite a toll and then his illness making matters worse.

He very slowly made it up the stairs in the late afternoon, on all fours like a monkey because when he’s weak he feels safer that way.  He climbed in bed and immediately fell back to sleep.  He got out of bed for an hour, later in the evening, and then slept all night last night.

I took him to the doctor this morning.  Aaron had pneumonia last year and was in the hospital for a week.  That was my fear now, but thankfully he doesn’t have pneumonia.  In fact, we’re treating this as a virus and waiting to see what happens.  Too many antibiotics last year was really hard on his body for months afterward, so we want to avoid those drugs if at all possible.

Aaron ate a little lunch when we got home.  Now he is sleeping, again.  Poor guy.

And I’ve been thinking how quickly things can change.  Sickness with Aaron is more serious than it usually is with most of us.  Sickness on top of five hard seizures has just done a number on him.  He is very slow and wobbly, and extremely tired.

It’s amazing how we could go from this: 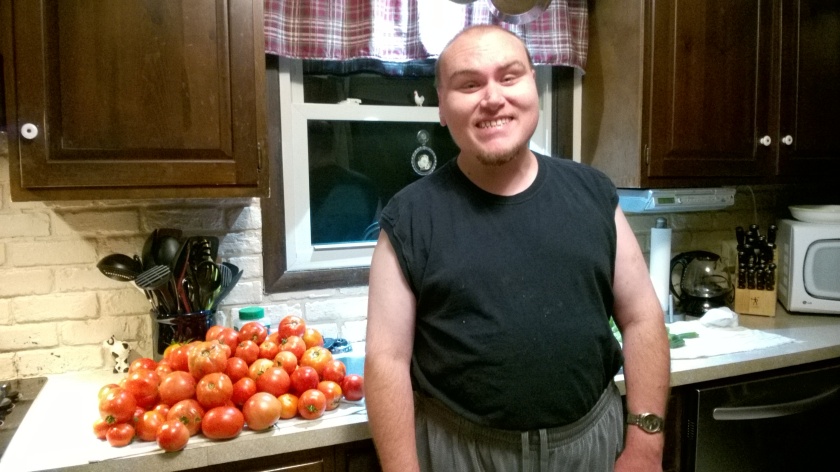 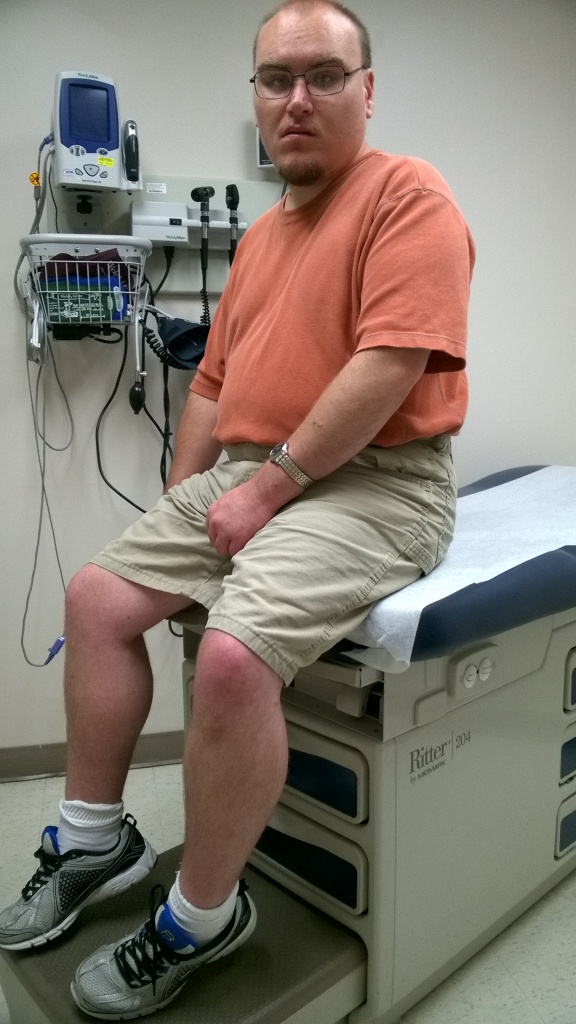 Hopefully, what Aaron has right now is nothing terribly serious.  But the stark change that he has gone through, literally overnight, is a reminder to me that we just never know what a day……what an hour……might hold for us. 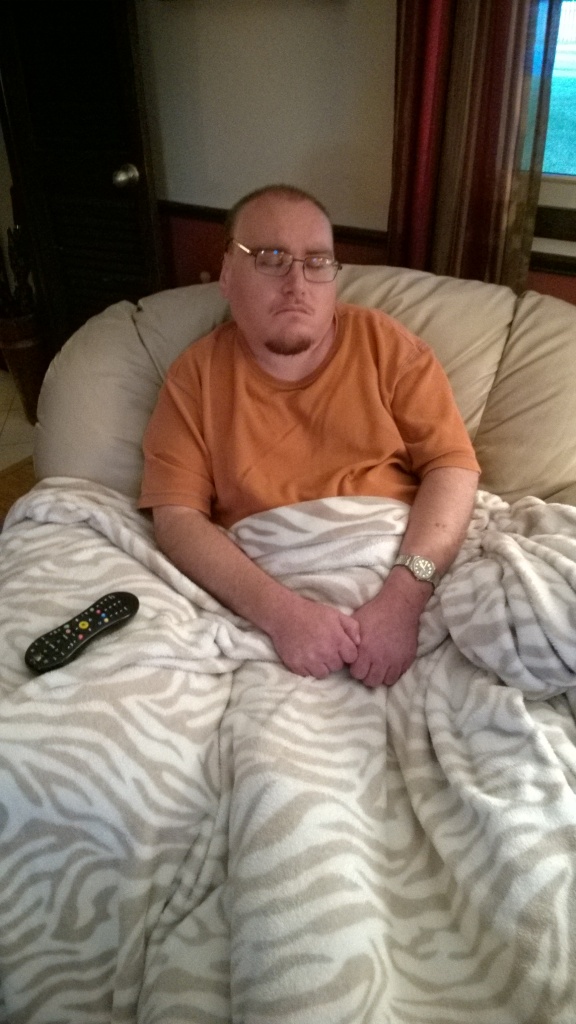 In James 1:2, James told us to consider it joy when we encounter various trials.  That word “consider” means to make a judgment.  It’s up to me to decide how I’m going to view my hard times.  It’s my call.  And various trials really mean “multi-colored trials.”  I think we all would agree that trials come in all different colors.  God uses a wide variety of situations in my life to grow me and to teach me.

But again, it’s what I do with my trials that can make all the difference.  It’s like Aaron’s pile of tomatoes, stacked up on the kitchen counter.  I could have left them there, where eventually they would rot and be no good for us or anyone.

Or I could do what I did Monday while Aaron slept nearby on the couch.  I could use the tomatoes for something good……for something that will benefit us during the cold winter that’s coming.

It was my decision what I did with those tomatoes.

And it’s my decision what I do with the trials in my life, so often unexpected and unwelcome.  God is waiting to grow me through the troubles I have.  I don’t have to understand them, but I do have to make the choice to let God use them in my life for something good…..and in the lives of others as well, I hope.

Not to become bitter, but better.  And then in future cold days that may come, I will benefit from the lessons learned…..learned in the hard times.