It’s been awhile since I’ve really written about Aaron.  So many days I want to write, but somehow life prevents me from doing what I would love to do.  I mean, do we really need clean clothes, food on the table, errands run, garden tended, a somewhat tidy and clean house, etc., etc., etc.?!  Then so much time goes by that I lose my momentum……lose the feel of those special Aaron moments…..and so I go on, hoping to recapture them and share them later.

Aaron and I are coming off of a fun, long Labor Day weekend.  It was sad for me because Gary’s Uncle Bob went to heaven on Friday morning.  This was awesome for Uncle Bob, but of course has left a huge hole of grief in the hearts of those that he loved and who returned that love so deeply.  He was a great man.  As Gary checked the price of plane tickets Friday evening, the realization quickly sank in that we could not both go home for Bob’s funeral.  I was very thankful that Gary did go.  At first he said no to that idea, but he really needed to be there with his family.  He’s so glad he did.

Aaron was my shadow for a large part of our long weekend.  We went out to eat……watched movies here at home…….took walks around our back yard with Jackson……washed and ate garden veggies…….enjoyed sitting on the patio and seeing our Hummingbirds at the feeders……watched Wheel of Fortune……and did a little shopping. 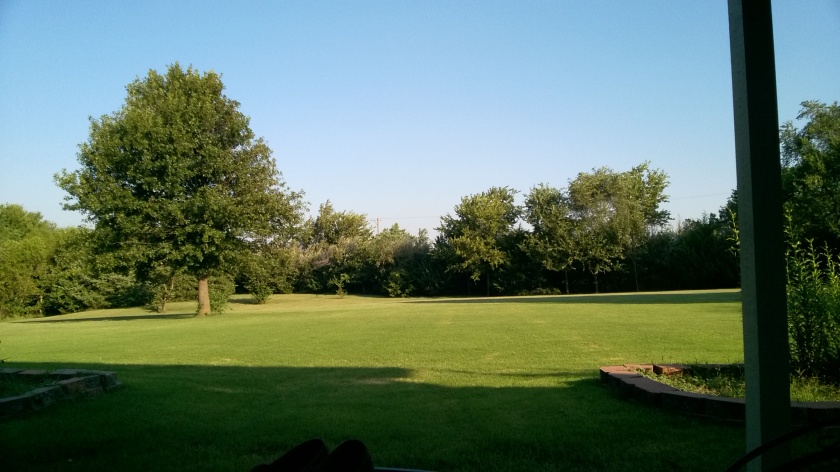 And I captured one of the best pictures of Aaron ever as we ate at Jose’ Peppers.  Isn’t this just great? 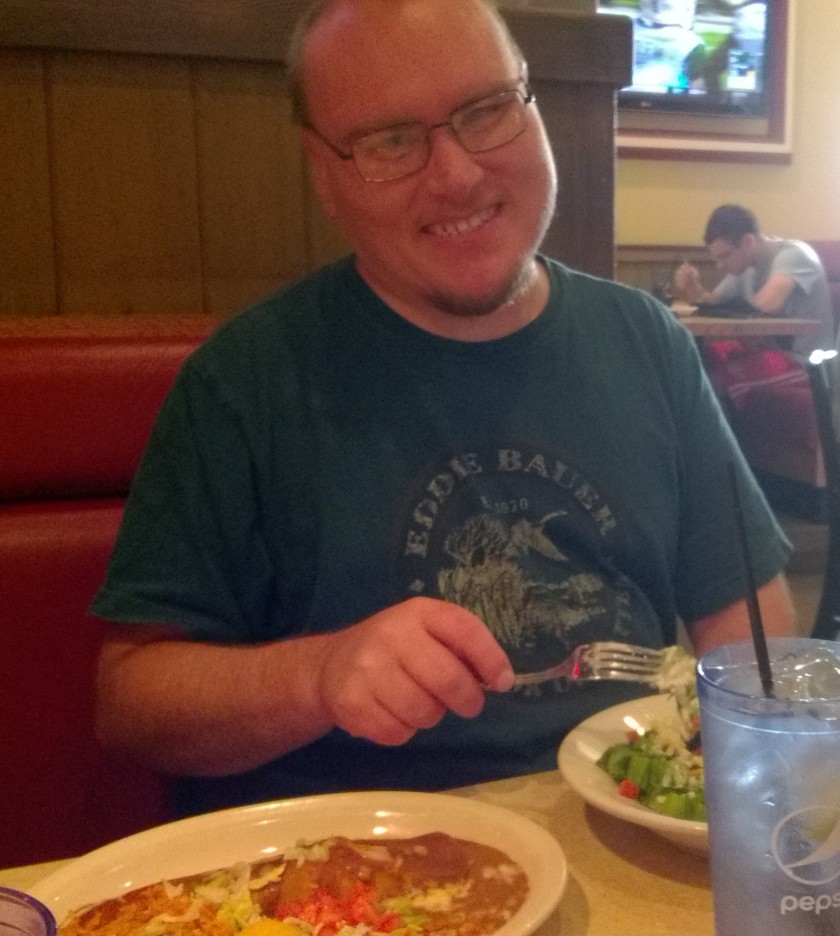 On our Wal-Mart trip, Aaron went on his way to the electronics while I browsed some on my own…..knowing that I would probably find Aaron later, when I went to pick him up, with some discovered jewel of a movie in his hand.  Sure enough, that happened…..but I was able to dissuade him from the need to buy it now since his birthday and Christmas are looming on the horizon.

In his other hand, though, he carried a CD.  Any of you who know Aaron know that he loves music.  He loves listening to music any time that the van door closes and the engine starts.  He becomes super focused……another word for obsessed……with whatever current artist is filling his ears with music.  He will announce every song as the number on the CD changes, then sit back and listen closely.  Then at home he will look their songs up on his computer and love every minute of watching them perform.

When it was Neil Diamond, for instance, Aaron one evening said to Gary, “Dad!  Mom and I are listening to Neil Diamond!  Mom likes number 11!!”  Then he paused, because surely Dad knew what song is #11.  When he realized that Dad was not at all adept with knowing #11, Aaron patiently said, “It’s Song Sang Blue.”  Never mind that it’s really Song SUNG Blue.  Aaron isn’t concerned with grammar.

Aaron continued telling Gary about Neil Diamond.  “He always carries a gu-tar.”   “Why does he like a gu-tar?”   “Is that his favorite instrument?”   “He has funny hair.”

And later, as he and I played Skip-Bo, Aaron suddenly asked, “Why do you like number 11?  Is the sound of that song kind of cute to you?”  So Song Sang Blue was thoroughly discussed, dissected, analyzed, and hopefully understood after we were done.

Back to Wal-Mart and the CD in his hand.  Aaron loves, loves, loves Ronnie Milsap.  He was totally thrilled as he held out his newly found CD for me to see.  “MOM!!  I found Ronnie Milsap!!!!”

So I said yes, and we immediately put it in to play as soon as the van door closed and the engine started.  As the sounds of How Great Thou Art filled the van, Aaron bent over and rubbed his hands together every bit as much as if the Beach Boys were singing about girls on the beach, as Aaron says.

And on Tuesday, back at his day group, Barb texted to tell me something and then she said, “Aaron was singing How Great Thou Art earlier.”  HaHaHa!  Isn’t that just the best?  Maybe that’s why he was having such a great day.  And he also took some of our garden tomatoes to share, giving some to his friend Yolanda, a fellow client.  Look at this picture of happiness.

Last night Aaron wasn’t feeling well at all.  He said his head and stomach hurt, and at 8:30 he wanted to go to bed.  “Maybe I suddenly caught a germ,” he quietly said as he and I went through his bedtime routine.  But he was off, not even asking if it was going to rain or checking on the outdoor temperature, which he ALWAYS does!  He did ask if I would have the monitor on.  I know why.  I know he’s afraid of having seizures, and that just breaks my heart for him.

Friends and family prayed, and there were no seizures during the night!  I was so, so thankful for that!  Aaron got up this morning after sleeping for nearly 12 hours, saying his head still hurt.  Yet he always says this in the morning, so I wasn’t too sure.  He sat across from me at the kitchen table, giving me a stare down as he hoped I would tell him to stay home.  As the morning went on, he improved.  Coffee and a shower works miracles!  And so did the offer of a Quik Trip stop on the way to Paradigm!

Later, sausage biscuits and Mike & Ikes in hand, we headed down Kellogg on the way to his day group.  The artist of choice now filling the van was Alan Jackson.  Aaron picked up the CD case and said, “Mom!  Look at #5 and #11.  They’re BOTH about LOVE!!!”

So as #11 played, I made a kiss sound in rhythm to the music……and received a resounding whack on my arm from Aaron!!

“What’s up with that?” I asked.  “I thought you liked the songs about love.”

“Well, love is too weird,” he explained.  “When people are in love, they have to kiss!!”

Good days……bad days……laughter……frustrations……joy……worry……fun……anger.  We have it all with Aaron, magnified on most days.

But when we’re feeling like singing “Song Sang Blue” on one day, there are many days that we’re singing a love song about Aaron.  But don’t tell Aaron.  He’ll think it’s weird……and then give us another sharp slap……