Last night was a seizure night for Aaron.  We are so thankful that he doesn’t have constant daily seizures like our friend’s son, Elijah, has.  I told Wendy this morning that I don’t know how she does it apart from God’s grace.  I know that each of us who know the Lord depend on His grace for the many circumstances that we face in this life.  Having a suffering child is tough.  When Aaron has seizures is when I feel most vulnerable emotionally.  His autism is high functioning, though in its own way debilitating, but he at least can function.  His autism makes him at times very frustrating and it causes him to be in trouble more than we like, both here at home and at his day group.  Or then he can also be very endearing and funny, even hilarious.
But his seizures……they make me sad.  They show me the seriousness of Epilepsy…..the danger.  I may be vulnerable emotionally on these days, but he is vulnerable physically.  And as his mother, that scares me….and makes my heart hurt.
However, I know from experience over the years that I cannot dwell on the scary or on the negative, even when it comes to my son…..my first born.  Being aware is one thing.  Being defeated with constant worry is quite another.  And constant regret……that’s one thing that I very consciously pull my mind away from when it starts down that path.  I would love for Aaron to have a normal life, a job, a wife and children…but he doesn’t and he probably never will.  Living with regret over those issues only pulls me down and doesn’t do anything to help Aaron.  Plus it’s not honoring to God, Who wants me to trust Him in all things.  That means ALL.  Even Aaron, my son, and my hurt over his pain and difficulties.
Aaron slowly made it downstairs this morning after his three seizures.  He tried to stay up and awake but as is typical for him, he laid back down on the couch and fell promptly asleep.  I covered him with his favorite blanket……the animal print blanket…..and he slept deeply until he had another large seizure.  Now he is awake off and on, talking about wanting his coffee that he missed this morning……will it still be hot…….when can he have it……worried that he won’t get to drink it……typical Aaron.

Earlier, while he slept and with me being unable to leave this area of the house for fear of another seizure, I stood at the kitchen sink.  I was washing the produce that I had gathered in the garden yesterday evening before dark.  Some tomatoes…..okra…..a red pepper……one pear that I was able to reach from our pear tree……and a few stray cucumbers.  On one of the cucumbers I saw the unmistakable signs of worms.  The brown, crusty spots on the outside of the cucumber were my clue, so I grabbed a paring knife and cut into the peel.  Yep, there it was…..a yucky worm……and then another nearby.  It was tempting to just throw the whole cucumber away, but I’m pretty thrifty about my garden produce that we’ve worked hard to raise.  There was still plenty of good left in that cucumber, so I washed the remainder and put it with the other healthy produce.  Aaron loves cucumbers, so he can eat it later. 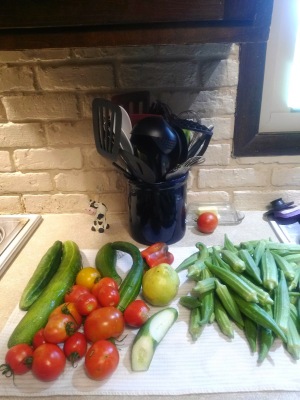 This might sound strange, but Aaron’s a lot like that wormy cucumber.  He has his issues…..his “worms”……..that disrupt his life.  The autism….the Epilepsy……they have completely changed his life from what we thought it would be.  When placed beside his sister and brother, we can see a stark contrast.  Andrea, a scientist and geneticist in a major lab……and Andrew, working on a professional NHRA pit crew.  Their lives are dreams come true for both of them.  We love hearing about their work, even when we don’t understand half of it.  It’s exciting and fulfilling for them.
Aaron is like that cucumber, yes.  He has some chunks removed……some expectations that we had for him that had to be removed.  But he has amazing value if we but stop and look.  God does NOT create mistakes.  Aaron has tremendous worth.  He draws us to God in ways we probably never would have been drawn otherwise.  He keeps us humble.  Oh, does he ever!!  He keeps us at times bowed down with worry or frustration or embarrassment.  But listen to the verse God gave me this morning:
“But You, O Lord, are a shield about me; my glory, and the lifter of my head.”  (Psalm 3:3)
I love how God gives me what I need, when I need it, from His Word.  He lifts my head to look not only up to Him, but to look at Aaron with new eyes……eyes of faith and trust in the God Who loves Aaron and loves us.  God has a plan for Aaron that is every bit as important and amazing as the plan He has for Andrea and Andrew.  We just don’t always measure Aaron’s value that way, but God does.  And He reminds me on these days that I need to as well.
Aaron……my wormy cucumber……just in this little area of my house, God has once again spoken to my heart.
Friend who is suffering today, never doubt God’s plan and His love for you.  Let Him be the lifter of your tired head.  He does care…..He does have a plan……for all of us.
Including my wormy Aaron.  My perfect Aaron, with lots of good in him that God is using.

One thought on “My Wormy Cucumber…..and Aaron”