We just finished with our exciting 2017 Eclipse…..or not.  Not as in whether it was exciting.  I was amazed and awed with it, even though we didn’t have total coverage.  We had 94% coverage, but that was still impressive……at least to me.  Aaron?  Well, we sometimes don’t totally know the extent of his awe when something isn’t quite as exciting as he imagined it would be.

We went to Riverside Café, wearing our matching eclipse shirts, where Aaron ordered the biggest baddest dish he could find.  Chicken strips, mashed potatoes, green beans, a roll, and salad. 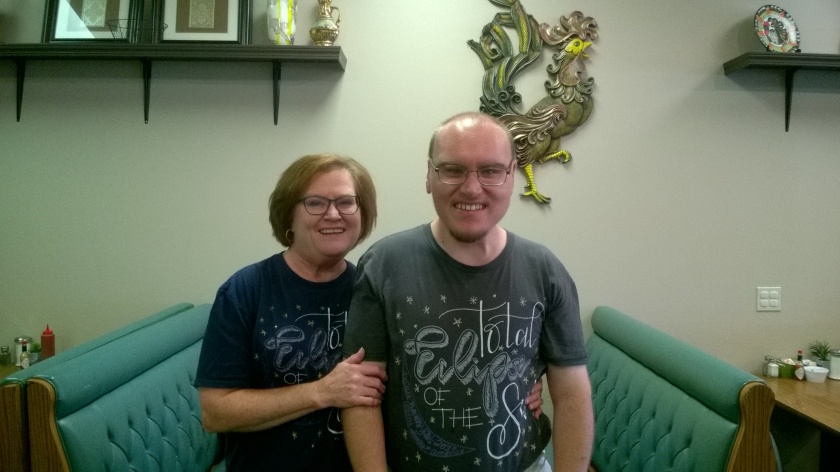 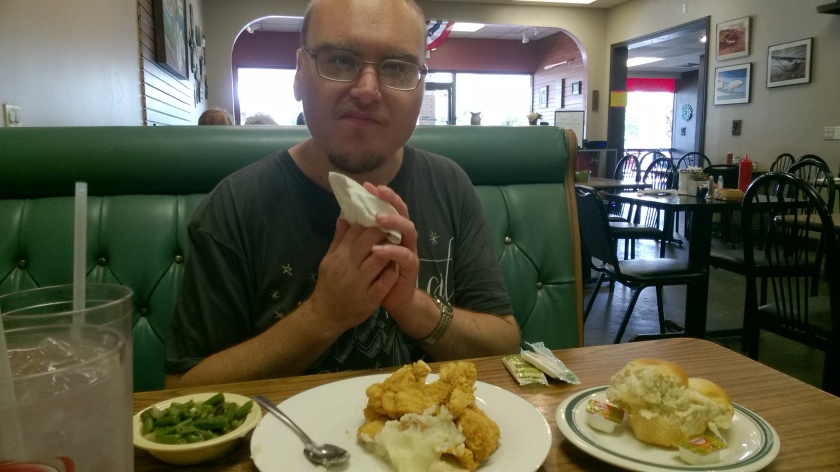 He didn’t leave one bite unswallowed, even when I accidentally put his fork and spoon on the pile of dishes to be carried away before he was quite finished.  Oh well!  His knife worked fine as he finished his mashed potatoes! 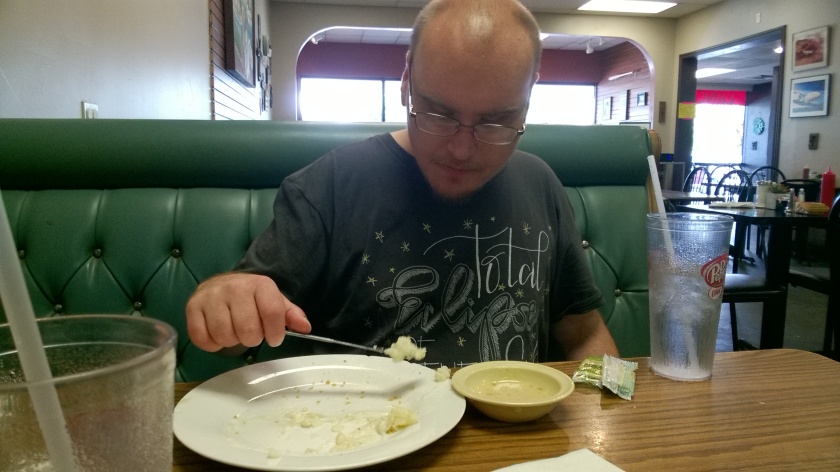 I took the time there that he was captive in the booth to explain the eclipse to him once again.  I showed him a diagram of just what was happening, what to expect, and what time it would start.  And I made sure he knew that it wouldn’t get completely dark here.

When we got home, I knew according to the clock that the eclipse must have just started.  It was still bright outside.  I unwrapped our special glasses, preached one last sermon with dire warnings about looking at the sun without the glasses, and out to the back yard we went.

I got Aaron’s glasses positioned over his regular glasses, and then put mine on.  We looked up at the sun and……WOW!!!  How awesome it was to see the moon beginning to cover the sun!!

Well, ok.  It’s not fully impressive yet, I thought, so he’ll be more excited next time we come out.

We went in the house, and Aaron hurried to his room to get on his computer.  A few minutes went by.  I could tell more from the light changes inside the house than outside that it was getting dimmer.  Inside the house it looked like evening, not 12:30 in the afternoon.  So I went back to the yard, looked up through my glasses, and then went in to get Aaron.

“Aaron!” I called from the bottom of the stairs.  “Come back outside.”

“OK,” he replied.  Soon he was downstairs.

“Has it started?” he asked.

“Well, it had started when we first looked at it,” I told him.

We looked up into the sky again through our glasses. 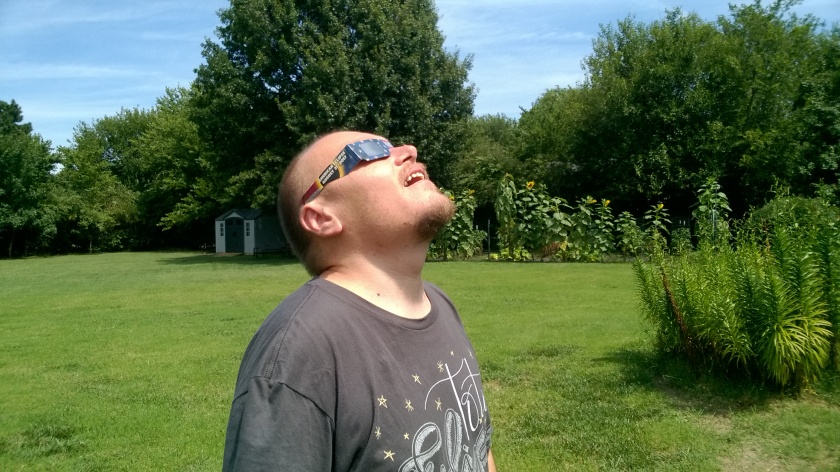 Back in the house……back outside.

“Has it started?” Aaron asked again.

Looked through our glasses…..I was excited…..Aaron, still not greatly impressed.

Wait a few minutes, get Aaron, only to hear once again – “Has it started?”

Same answer from me.

Inside the house, which was getting darker, and soon I called to Aaron again.

“Has it started?” he asked yet again as we went out the back door.

I just decided it was better to say yes from now on.

I knew the problem.  He was waiting for it to get darker than it was outside, even though I told him it wouldn’t get completely dark.

“Let’s go to the front and look at the cool shadows of the sun through the leaves,” I suggested.

We stood in the driveway as I pointed out the shape of the eclipse seen in the leave’s shadows. 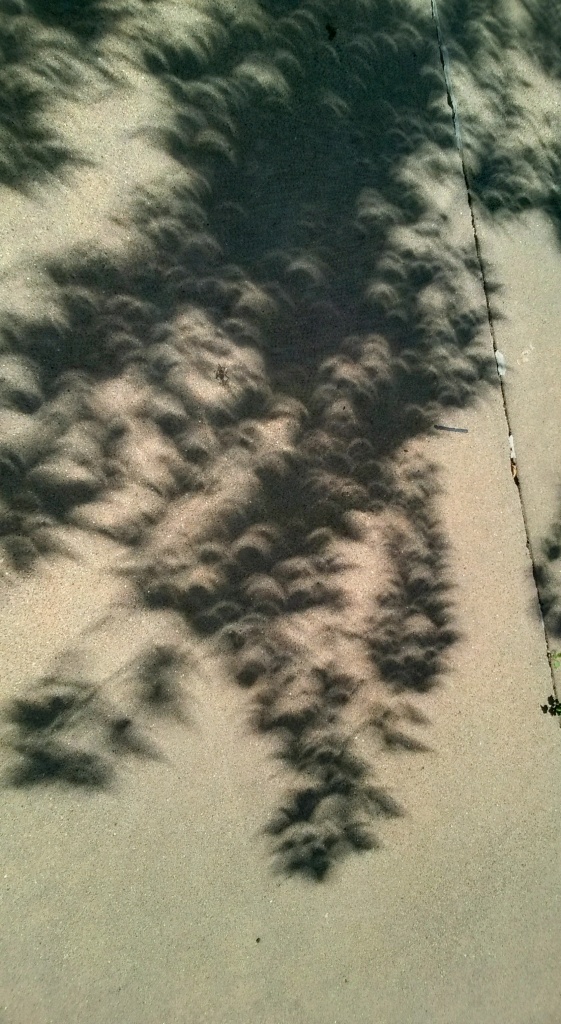 “Has it started?” he asked.

I had to chuckle as I told him again that yes, it had started.

We sat on the patio and then went to our viewing spot in the back yard several more times as the eclipse wound down.  And every time I heard again – “Has it started?”

Finally, enough of it was over that I decided to call our Eclipse Day a day.  We went in the house and Aaron scurried back up to his room.  Before long, though, he was back in the kitchen.

“Are we going outside again?” Aaron asked.

“Well, the eclipse is over, Aaron,” I told him.

I assured him that he saw it, even though it didn’t get completely dark outside.

I’m not sure he believes me yet.

I wonder what he’ll tell Gary tonight at supper about our big Eclipse Day.

I have a feeling that his big lunch will eclipse our big eclipse. 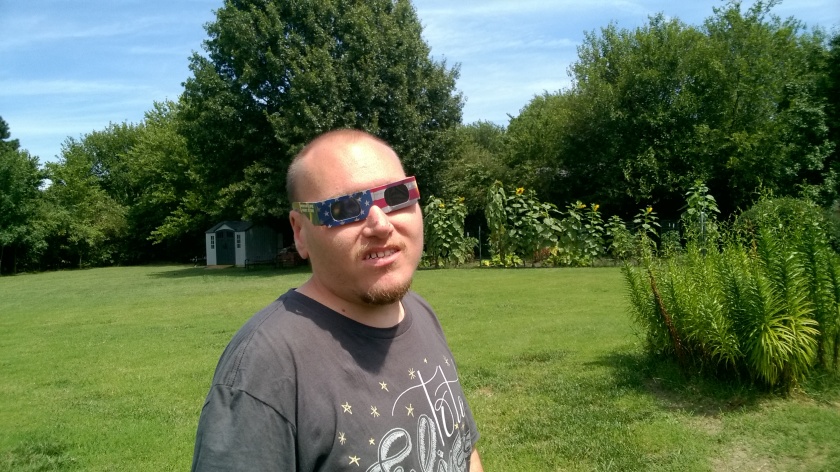