I sit here at the kitchen table, one ear on the washing machine and the other on the baby monitor. Our washing machine was having some trouble two nights ago, so yesterday when Gary got home from work he opened up the back and got it all fixed. At least we hope it’s all fixed. That’s why I’m listening as it washes a second load this morning, wanting to be sure it’s working as it should.   A broken washing machine is no fun!

And my other ear is on the baby monitor because Aaron had two hard seizures last night. He’s been out of bed this morning, drinking his requisite three cups of coffee and then back to bed. He will sleep off and on today as he recovers. I’ll continue to listen for further seizures, which he often has during the day following his night episodes. Poor Aaron. He and I are still hoping to take supper over to Shawna and Aaron’s other friends at the house in which they live. He keeps asking if we can still go and I keep hoping that we can. Why do seizures have to so often mess up his fun times? It makes me sad for him. So in a sense a broken Aaron is no fun, either…..for him, certainly.

I don’t look at Aaron as broken, but I look at his seizures that way. They interrupt his life so often and so it breaks my heart for him. They break into his routine and into his plans, mess up his sleep and his following day, make his bitten tongue so sore, his head hurt, and all the rest that goes along with these awful things.

It makes me think about how we live among so much brokenness. There are so many broken issues and broken people all around us. Just this week I visited my dear friend, Atha, who is still struggling as she recovers from a stroke. Our friends in Texas, Steve and Dona, are working hard on his stroke recovery. Another friend’s son died from cancer early this morning. A friend is undergoing heart tests this morning. Our own daughter will soon have more medical tests run as her body continues to show a problem as yet unfound. Scrolling through Facebook…..looking at my prayer list……visiting with others on the phone or at lunch only confirms the deep hurts and problems that many are facing.

Our broken world is marred by sin, fractured back in the garden as Adam and Eve willfully disobeyed God. We and our world continue to bear the consequences of that sin in a universe imperfect now, not as God planned. But it’s not hopeless. Not at all. God made a way for each of us to come back to Him through His own Son. Jesus paid the price of sin, and for all who are called and respond to God through Jesus, there is life and hope.

But we still have this life here, lived in broken bodies and in a broken world.

I watched Aaron on Sunday morning as he cut the Sunday coupons for me. This is his Sunday routine, performed faithfully for me as only Aaron does. In fact, he won’t let me come near the coupons with a pair of scissors because I don’t cut them correctly. Aaron cuts on the dotted line as best he can. Not near it. Not beside it. Not close to it. He cuts ON the dotted line.

Then he takes the little strips of paper that he has cut off and he meticulously snips them into tiny pieces as he holds the strip over his special trash can that’s just for that purpose and no other. It takes lots more time than necessary, but he doesn’t care about that. He has always, and will always, clip coupons and paper strips in this fashion. It’s very fascinating to watch. 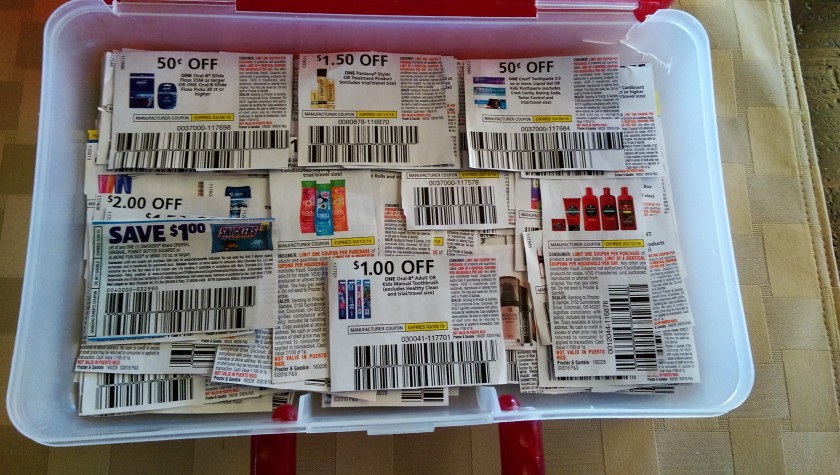 As I think of the brokenness of life and of our world this morning, I’m reminded that for believers God is much like Aaron as he clips my coupons. God is full of purpose and planning for my life. He carefully cuts, always ON the dotted line, and He puts events and people and order into my life in the exact way that He knows is best. He is structured and precise as He takes each individual element of my life and places it exactly where it needs to be. His timing is perfect. His placement is always on spot. I may not understand it all. I may not like it all. But I know the One Who is doing the clipping and the snipping and the placement of each single area of my life, and of those I love.

And I know that I can fully trust Him to do it right. It’s called sovereignty.

“The Lord will accomplish what concerns me; Your lovingkindness , O Lord, is everlasting. Do not forsake the works of Your hands.” Psalm 138:8

Someday, maybe not until heaven, I’ll be able to open that box that holds my life events. I’ll see it all together, clearly, and I know that I’ll see order. I’ll see the plan of God. I’ll see each piece of my life put down just where and how God wanted it, always for my good and for His praise.

Even when I mess it up, God brings order back into it as I allow Him to do that. He loves me that much, like the verse above says.

So I’ll let God do the clipping, even when I don’t understand it or even agree with all of it. Because I know I can depend on Him to do it right, every single part and piece.

He keeps His ear on us, and He fixes our broken. He’s the only One Who can.