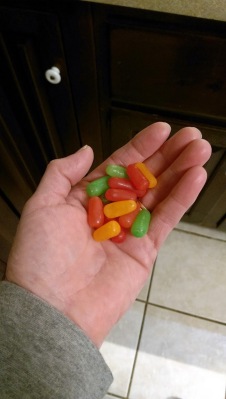 And what can we do but try our best to do what we hope others will do with Aaron.  We appreciate the understanding that strangers show to Aaron.  Can we do less?  Understanding what makes him tick, what makes him upset, what it is he is really trying to say when he is so upset……this is all part of figuring him out.
It’s “getting Aaron.”  Not condoning behaviors, which we don’t, but understanding the behaviors as much as a parent of a child with asthma understands an asthma attack.  I thought of all this when I was sitting in Aaron’s room with him, watching him come to the end of the fight, and realizing how vital it is that I understand.
It means as much to Aaron for us to understand as it does to us for others to understand.  Complicated.  But so very necessary.
Aaron?  Guess what?
We’ll keep trying to understand.
And I should keep a box of Mike and Ikes stashed somewhere for good measure.

2 thoughts on “A Fight to the Finish”