Skip to content
I was winding down a long day of cooking on Tuesday night when Aaron came bounding into the kitchen.  “Mom!” he said.  “Will you print off some cheat codes for me on your computer?”
Now the last thing I wanted to do at that point was go down to my computer and start looking up cheat codes with Aaron.  So I pretty well told him that.  But Aaron doesn’t take no for an answer very easily when he’s so set on something as important as cheat codes for his Star Wars Legos game.  I know that about Aaron, and therefore I was soon in my computer chair with Aaron hovering over my shoulder.  He instructed me on what to type in order to arrive at the correct site.  We printed a page but it wasn’t right, so we printed again and thought it was right…..but soon I could see that look on Aaron’s face that told me this looking up cheat codes job wasn’t finished yet.
I was really too tired for this.  I had reached that point of bone tired frustration.  I just leaned over then as Aaron typed in the correct information himself.  Sure enough, there on the screen popped up the precise cheat codes that he needed.  It was just two pages.  I clicked the print icon while Aaron gleefully rubbed his hands together.  He held the two pages with as much delight as if he was holding the title to a new car.  I stapled them together and we were done.  Thankfully done!
“Thanks, Mom!”  Aaron said.  He thumped with his usual loudness up the stairs to the kitchen, while I more or less dragged myself behind him.  There was the counter full of pot and pans and other sundry dishes that wouldn’t fit into the dish washer, waiting on me to dig in and get them washed.
“Mom!” Aaron turned and said.  “Since you helped me, I’ll help you.  I’ll dry the dishes!”  This unsolicited offer to help was a surprise to me.  He was so sweet about it and so sincere that I wouldn’t dare say no…..even though the temptation was there.  His drying skills are sometimes lacking, while his talking skills never are.  I knew he would be halfway drying and all the way talking.  My bone tiredness wasn’t looking forward to that scene.  But the look on his face and the willingness he showed kept me from refusing his offer.
I told him that of course he could dry the dishes, but he noticed the time then.  Shower time!  So he hurried off to take his shower with the promise that he would return to dry dishes.  And sure enough, he did just that.  After his shower, he stood beside me with the drying towel and dried each dish to some degree.  And he placed them in a stack on top of the stove or on the counter, laughing at how they might fall over and talking all the while about whatever came into his head. 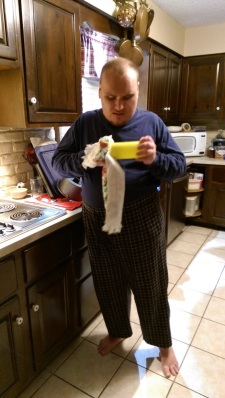 I realized that I wasn’t thinking about how tired I was.  I was enjoying this time with Aaron as he did his part to help.  Then I thought about Pastor Bob’s sermon on Sunday…..how the ten lepers were healed by Jesus, but only one returned to give his thanks to the One Who had healed him so miraculously.
It would have been expected for Aaron to hurriedly take his shower and then get right back on his Star Wars game, using his brand new cheat codes, without a thought in the world for dirty dishes that needed to be washed and dried.  But he didn’t.  He knew that I was tired and he knew that he could help.  Plus, it was his way of saying thank you to me for printing the cheat codes.
In a sense, Aaron was the one leper who returned to give thanks.  Aaron, who usually only thinks of Aaron, thought of me at that moment.  And he saw a way to say thank you…..a tangible way to express his appreciation to me.  How could I say no to that?  I’m so thankful I didn’t!
It was another unexpected blessing from Aaron….a side of Aaron not always seen.  We shared some thankfulness that night during this season of being thankful.  It was good for Aaron, and it was especially good for me.
May I remember to not only BE thankful in every situation, but to allow Aaron the opportunity to also express his thankfulness in the ways that he can.
Happy THANKSgiving, everyone!

2 thoughts on “A Thankful Moment”