Skip to content
I was reading 2 Kings 4 yesterday – the story of the Shunamite woman.  It’s a story you may know, but what I read in my commentary/devotional book by Dale Ralph Davis gave me a new insight that totally blessed me……..so I hope it will do the same for you as well.  You probably know the story.
Elisha often passed through Shunem on his travels through Galilee.  A Shunamite woman of wealth and standing began opening her home to Elisha, extending her hospitality by offering him food and rest.  This woman urged her husband to add a room on to their house, a guest room of sorts where Elisha could spend the night.  During one of those stays, Elisha decided that he wanted to reward the woman for her kindness.  He asked her if he could put in a good word for her to the king or to the captain of the army.
The Shunamite woman said no to Elisha, explaining that she had all that she needed or desired right there in her own community.  But Elisha still wanted to do something to thank this woman, and so Gehazi, Elisha’s servant, reminded him that the Shunamite had no son……….and her husband was very old.  Elisha called the woman back and then proceeded to tell her that by this time next year, she would have a son.  At first she didn’t believe it, but sure enough, to this woman and her old husband a son was indeed born.
When the son was grown, he went out to the field one day to help his father.  He complained of his head hurting and was carried back to his mother, where he soon died.  He was placed on the guest bed in Elisha’s room, and then the Shunamite rode a donkey to Mt. Carmel, where she found Elisha.  She grabbed his feet and in great distress she reminded him of God’s promise of a son for her.  A promise that now ended because her son was dead.  Elisha returned to her house, and through God’s intervention the son was restored to life.
What so impressed me as I read Davis’ commentary was this:  The Shunamite woman, when asked by Elisha if he could put in a good word for her, said no…..that she had all she needed.  She had no need of a favor or a good word or anything, really.  She had position and money, a husband and a home, and a strong community.  No needs.
Yet at the end of this story, she is very needy as she pleads for Elisha’s help.  What had made her needy?  God’s gift had made her needy.  God had given her a son, a beautiful gift of a son, but through that gift she had now become very needy.  God gave her a gift, but then He took it away.  Does this mean……that God is mean?  Does He enjoy giving good gifts only to enjoy taking them away?  Does He “make glad, only to increase the pain?  Does He lift us up only to drop us all the harder?” (Davis)
The Shunamite clutched Elisha’s feet and sobbed in bitter distress as she pleaded for his help.  And in her sobs and her distressful pleading, she was exercising faith in God.  The God Whom had so blessed her was now perplexing her and crushing her.  And as Davis said, “What can you do when God’s mercy has turned to malice?  Take the bitter distress and in it keep clutching at the God you don’t understand.  We have a word for that: faith. (Which tells us, by the way, that faith is not serenity.)”
My mind turns to our Aaron when I read these words.  He was such a wonderful gift from God to Gary and me.  We had been married for over five years when he was born.  He was a precious little 6 lb. 4 oz. bundle of blessing to us. Our firstborn!  I knew that no other woman on the earth had ever felt as much joy as I was feeling as I looked at him in my arms.  I was so proud and thankful.  A son!  Boys were rare in our family and there I was, with a son.  A SON! 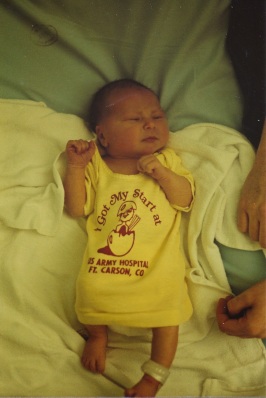 The days turned into months and the months into years.  Then came the seizures, along with behaviors that only increased with age instead of improving.  School issues, finding doctors, trying all sorts of medicines, friends or lack thereof, sibling problems, the autism diagnosis, endless meetings with professionals, embarrassments, and constant awareness that our life was often rotating around Aaron.  It was overwhelming, and totally not what I thought life would be like for us and our Aaron……our son.
It was often hard to capture that joy and pride I had experienced when he was born.  I loved Aaron……I love him now……but it’s often been through a haze of sadness because of his condition, and frustration because of his behaviors.  As I read what Dale Davis wrote, though, it hit me square in my heart.  God’s gift of Aaron to me has made me needy…..and being needy has made me learn to rely on God in a way I might not have done otherwise.

Like Davis said, I have often found myself clutching at the God that I don’t always understand….and that is called faith.  “Faith is not serenity,” Davis said.  That’s certainly true in my life.  Not only is life with Aaron rarely serene, but the raging questions and disappointments in my heart are anything but serene.
Is Aaron our thorn in the flesh like Paul had?  Maybe.  I do know that beside certain verses in my Bible I have written Aaron’s name and a date, my signpost of ways that God reached down and spoke to me concerning Aaron issues.  God has certainly used this gift of Aaron to draw me to Himself in a way that perhaps I would not have ever experienced without Aaron in my life.
I want to remember that phrase……..God’s gift has made me needy.  Needy for God and needy for faith………a faith exercised in sometimes very trying circumstances and a faith exercised without always having answers to my questions.
Davis said, “……the story is here to reveal your God – the God Who delights to amaze His ‘ordinary’ people with good gifts; Who sometimes baffles us with the mysterious sorrow He brings…..”
God baffles, but He also blesses.
Much like Aaron does in my life………from baffling to blessing, over and over.