Aaron was in the hospital last week.  Thankfully, this was a scheduled visit and not an emergency like we had two years ago when Aaron got suddenly sick with aspiration pneumonia.  This recent stay was so that Aaron could have a Video EEG.  This testing is an important tool in determining where in the brain his seizures occur, thereby hopefully having some new treatment options offered to him.

We had determined to make the thought of a hospital visit sound as exciting as possible while also being truthful about the purpose of the testing.  We talked about how we would have time there to watch DVDs; play Skip-Bo; play his Nintendo DS; and ORDER FOOD!!  This all sounded like fun to Aaron, although he would have much preferred to have these same options while staying at home.  I told him that the business of ordering food was not going to happen at home, so off to the hospital we went.

I gave Aaron his bag to carry as soon as we parked in the parking garage at St. Francis.  I grabbed the rest and we walked to the elevator.  Aaron happily punched the button, and soon the doors opened…….to reveal a rather large man sitting in a wheelchair.  This man was a double amputee, having no legs, and I must say that it was a bit startling to see this.  Aaron just stood there in front of me, and in front of this dear man, staring and not moving.  I gave Aaron a little nudge as the kind man gave a big smile, and told us to come on in.

“Please, please, please, Aaron,” I thought to myself.  “Don’t say anything you shouldn’t say!!”  Thankfully, Aaron kept quiet as the man and I chatted.  He was so personable and nice.  I’m sure he was used to many stares, and in that respect I could relate to him.  Maybe he knew that.  The elevator door opened and he told us to go on ahead, which we did.

We walked away a few steps, and Aaron just couldn’t hold it in any longer.  “Mom,” he said.  “That man didn’t have legs!!”  As if I didn’t notice.  I hushed Aaron, knowing that the man was behind us, and so Aaron repeated it again, but quieter next time.  Hopefully the man didn’t hear us.  Later I was able to use that as a teaching moment for Aaron about being kind and polite.  I have no idea if it stuck, because Aaron was immediately off on something else……namely, the bell that he saw and really, really wanted to ring.

Aaron had to wear button down shirts because of the wires which would be on his head.  He looked so nice, I thought, not at all like he was getting ready to stay in the hospital and have seizures.

Hospital visits for Aaron, I have learned, are very interesting and also challenging.  There are many people who work with Aaron who quickly see that Aaron is unique.  My job, other than caring for Aaron, is to care for those who come under Aaron’s blunt responses……or his silence…..or his attempts at being funny……or his frustrations……and I could go on and on.

The nurses, the technicians, the doctors……just everybody who saw Aaron…..were wonderful and kind and very understanding.  I’m sure many didn’t totally understand everything about Aaron, but still they were sweet to him and to me.

The resident who came in every day certainly got an earful soon after we got in Aaron’s room.  Aaron was being hooked up to the EEG while the resident came in to do his assessment, and to ask me questions.  He had lots of questions about Aaron, of course, but Aaron finally interrupted loudly.

“My Mom’s a blabbermouth!!!” he said with a measure of anger.

I knew exactly what Aaron was saying.  He didn’t like being talked ABOUT while he was sitting right there listening.  However, it just has to be that way sometimes, which I explained as the resident was stifling a laugh.  This resident stifled lots of laughs, and some he didn’t hide at all, during the four days that he saw Aaron.

Aaron also doesn’t like to be made to feel dumb.  No one there in the hospital did that at all to Aaron, but it was easy to interpret it that way.  Like when he had his first seizure on the second night, and the nurse came in later to check on him.  She asked him to say, “One, two, three, four, five.”  He repeated it, but with frustration, and so she quietly asked me about it.  But it made Aaron feel dumb, he told me later, so I had to explain the situation to both Aaron and to the nurse.

I was a liaison, I guess.  That could look good on a resume, actually.

So, Aaron was all hooked up shortly after getting to his room.  He also had heart monitors on his chest, so he had both the EEG pack and the heart monitor pack to put around his neck when he got up to sit in a chair or go to the bathroom.  He handled it so well, only getting irritated a few times and REALLY irritated on the morning of dismissal…….which never happens fast enough for anyone, but especially for Aaron. 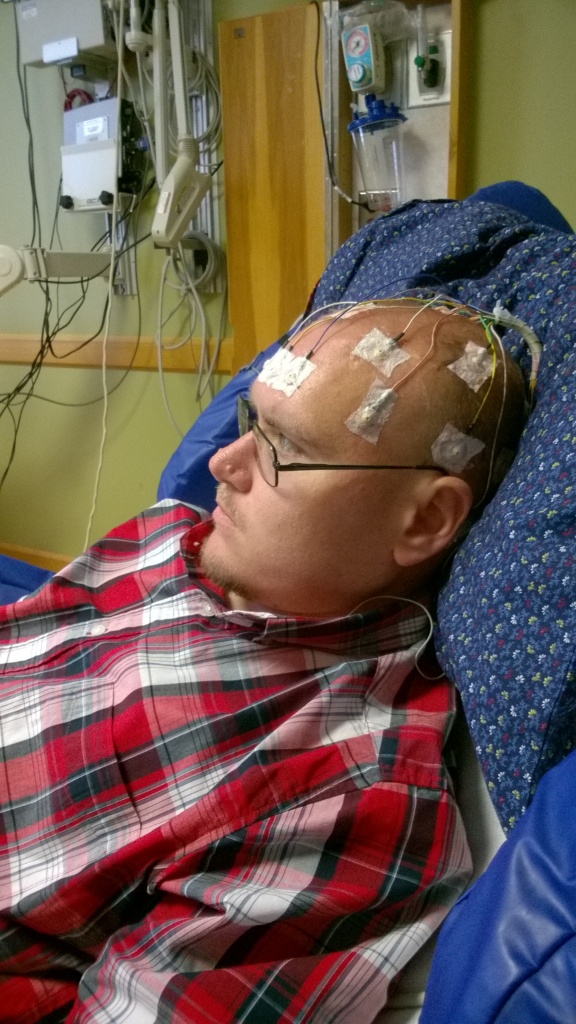 When Gary came that first evening, Aaron did get to show him the lines.  “Dad!!  When you were in the hospital, did you have lines?!”  And……

A bed that goes up and down is such great fun……for at least a day.

His first dinner ordered was:  Mashed potatoes, a roll with butter, and pizza.  He was truly in food heaven!

He wanted to keep his schedule as much as possible.  We played Skip-Bo the first night, but he got so sleepy that he finally took a nap. 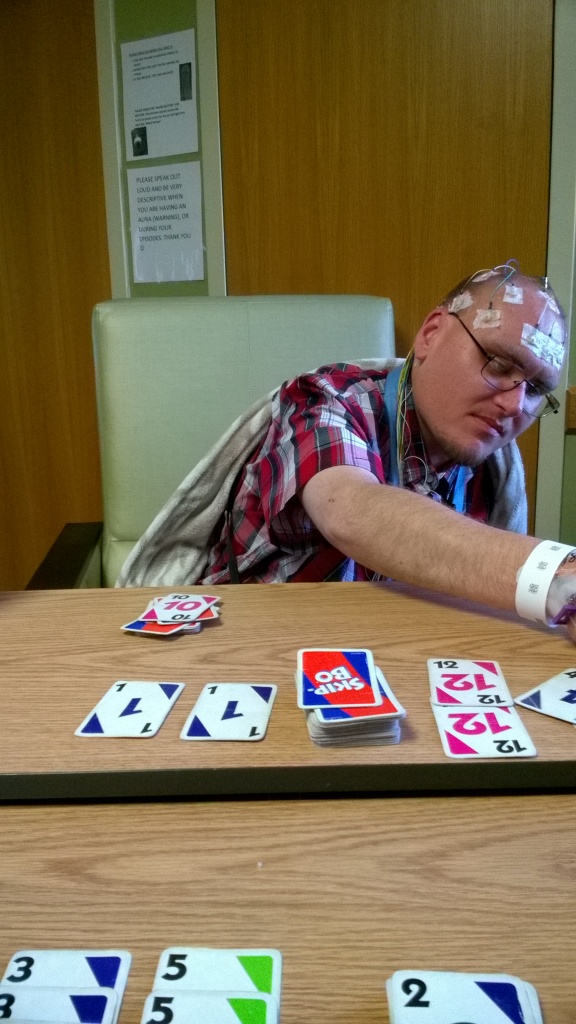 He got up at 9:00 to finish our game, but was still very tired.  I suggested bed.  And those of you who know Aaron will guess what he said.

So I suggested that he brush his teeth.

I forgot to bring his deodorant.  Knowing that Gary gets home at 5:30, Aaron said, “When it becomes 5:30, can you call Dad to bring my deodorant?”  He was happy to see it in the bag later that evening.

“Can you put the deodorant on right now?  My chest stinks!”

He loved having Joyce come, and really loved seeing the subs she brought us and the goody bag full of treasures.  His favorite was the sock monkey and the battery operated back massager.

He talked to Wendy on the phone…….Wendy, whose son has terrible seizures and who totally understands all this video EEG business.

Aaron told her, “I’m kinda all wired up.  The lines are detecting my brain.”

We laughed, Wendy and I.  But then Aaron said, “They’re trying to discover things about seizures in my brain.”

And that was the difficult part.  To discover things about seizures in the brain, you must have seizures.  So, as Aaron’s seizure drugs were decreased, his chances of seizures were increased……which was the whole reason for being there.  Still, it was hard on Aaron and hard on my mama heart. 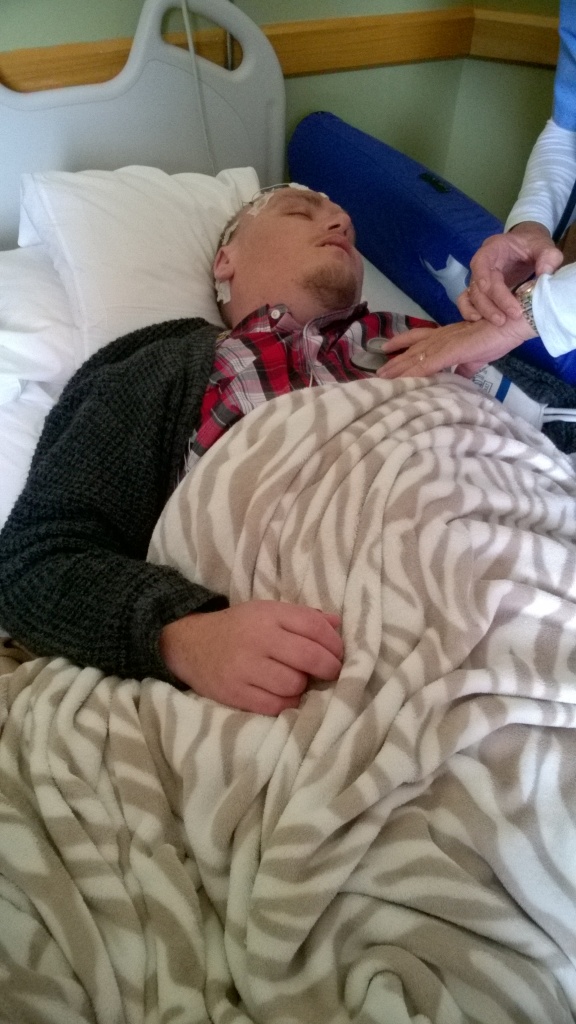 He did have a seizure, finally, on our second night there and again that next afternoon.  The doctor got the results needed in order to talk about future treatments.  But Aaron’s seizures continue to be what we knew they were from years ago.  I listened to Dr. Lee as he told me the results.

But God isn’t limited at all, this I know.  He has a plan for Aaron and for us.

But Aaron’s plan at that moment was to ask the doctor the all important question:  “CAN I GO HOME???!!!”  Even getting to order food was not so charming anymore.

Aaron was happy, happy, happy to hear that he could go home the next morning.  And on that next morning, he gave the resident a whack on his posterior, much to my great embarrassment……the resident’s great surprise……and Aaron’s great delight.  He squeezed the nurse’s fingers way too hard during her last assessment, and told her that he was tired of her listening to his breath.  He rolled his eyes at the hospitalist when she came in one last time.  He tried to remove his wires on his own, and some had to be reattached, much to his great dismay.

But at last, the wires were all removed!!

The bags were all packed!!

Shoes and socks were on!!

Discharge papers were all delivered!!

And it was home again, home again……with a stop to get Dad and deliver him to pick up his truck that had died out on the road earlier in the week and was in the shop.  Yes, it was that kind of week for him and for us.  And then a better stop at Taco Bell, and home with nachos and tacos and all our hospital stuff!

Another piece of the puzzle of Aaron’s life and health is now in place.  It’s not the best of news and it’s not the worst of news.

But no matter the news, we have lots for which to be thankful.

“Let your requests be made known unto God, with thanksgiving,” the Bible tells us.

Some days that’s hard to do, but God has a gentle way of reminding us.  Like I’ve said to Aaron since we saw the man on the elevator:  “Yes, you have seizures.  But you can walk!”

And may I add:  Aaron can talk!

To be continued, I’m sure.