Eight years ago today we got the news that my Dad had stepped into heaven.  And for eight years before that, Dad had fought a hard fight against the cancer that eventually took his life.  So many stories of that time in our family…..so many memories of the month I spent with him and Mom before he died.  I’ve written much about it in the past.

This past Thanksgiving our family gathered in West Virginia, in our hometown.  Some still live there in Princeton.  Others had far to travel.  It was an epic gathering, really, and the first time many of us had seen each other in years.  Mom and Dad would have loved it, we all found ourselves saying over and over.  Wouldn’t they have been so happy that we did this?!

And look how we have grown.  This picture was taken in the mid-90’s.

The below picture was taken this Thanksgiving.  Yes, we have multiplied!  And we were missing a few who weren’t able to come! 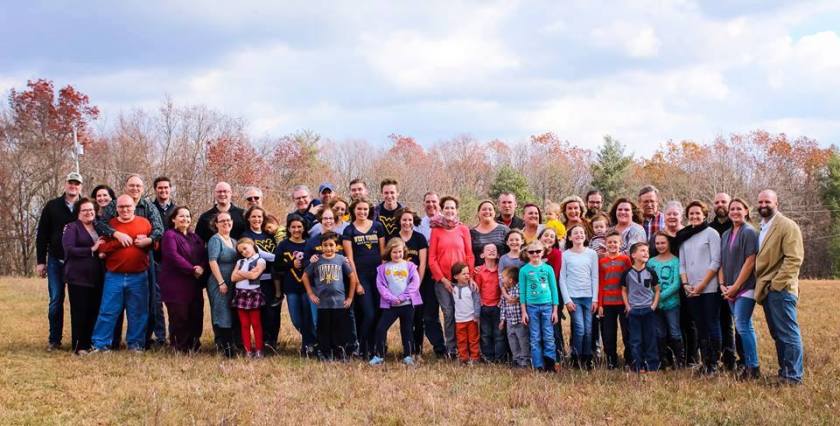 We had a wonderful time, all too short, of hugs and laughter and lots of talking as we tried to catch up with each other.  The day was over all too quickly.  As nice as it was, though, I felt like something was missing.  It just didn’t feel the same.  I realized, as I thought about it, that the something missing was actually someone who was missing……Mom and Dad.

In the past they were the center of everything.  Stories…..laughter……teasing……singing.  So much of that revolved around them, and now for the first time this very important part of all our lives was gone.  That was the huge difference that I felt.  It just wasn’t the same, and I guess it just couldn’t be without Mom and Dad there as our focus.

I’ve been thinking today about Dad on this anniversary of his death.  And remembering the very poignant part of our recent Thanksgiving meal when my brother, John, read to us out of Dad’s Bible.  He told us this story before he read Psalm 145.  In John’s own words:

Regarding Dad’s Bible, it started on Thanksgiving of ’15, when I reached up to a shelf at home to get a Bible to read Psa 145 for our family.  I knew it was Dad’s Bible, but didn’t remember that he had carefully marked his daily readings with the dates on which he read each section (including the introductory notes and the 500 pages or so of study notes at the end).  When I looked at Psa 145, I noticed he had read it on Nov 26, 2000, exactly 15 years to the day before I was set to read it to my family.  There was something about that divine intervention that touched me very deeply.  When I got ready to read the same chapter to our family this year, the thought hit me to check his detailed medical journals to see what he was experiencing at the same time he was reading those passages of praise in Psalms.  He was right in the middle of his radiation treatments from his first bout with cancer.  He had already had the surgery to remove two-thirds of his right lung, and had already finished the grueling chemo treatments.  Now as he took radiation, he was circling verses like Psa 116:6, 116:15, 121:7, 126:3, 127:3-5, 131:2a. 138:8, and 139:16.  What a window into his soul to see the verses that God was using to comfort him, giving him hope and trust in the greatest challenge of his life.  And so characteristic of Dad, he was not talking with everyone about this.  It was a very intimate journey with his Lord that bolstered his soul as his body suffered.  I found myself thanking God for the man he was, and wishing I could talk with him about that journey.  I probably missed him more then than at any time since he had died.  What a treasure, though, to have that record of his triumphant faith in the midst of adversity.

Isn’t that amazing?  I’m so glad John shared that with us.  Dad’s “triumphant faith in the midst of adversity” never wavered as his body wavered and finally succumbed to this disease that we all hate.  Dad remained true to the Lord, to Mom, and to his family.

And now today we five children carry with us his heritage of faith, as do many of our children and grandchildren.  I’m so very thankful for that!  Of all the many things to be thankful for this past Thanksgiving Day, that would be one of the biggest.

We miss you, Dad, but we know we’ll see you and Mom again.  Thanks for showing us the importance of following Christ, and for living out your own faith so beautifully and consistently.