Skip to content
If I could push re-wind, I would.  It probably wouldn’t change much but at least I’d have another try.  Would I say things differently?  Would I just not say some things at all?  Better yet, could we just wipe yesterday off the calendar?  But if we were able to do that, we’d also pass up some wonderful moments and some good lessons learned.
Have you ever had those thoughts as a parent, especially?  Or even as a spouse, or family member, or friend?  Yeah, me too.  Especially after yesterday…….but today has been a new day, a better day, for which I’m very thankful.  Who knows about tomorrow?
Gary and I have been so up and down with Aaron lately because Aaron has been so up and down.  He has been too fixated on a computer game that we wish now we had never let him have again.  When Aaron becomes this consumed with something, that something actually controls him.  Not every day is bad, but yesterday was……..
Aaron did go to his group in the morning, but with anger.  We were mostly silent on the way to meet his group, but the way he slammed the van door when he finally got out of our van told me that his day………and Paradigm’s day……..was going to be very interesting.
Aaron’s broken glasses, carried home in an envelope, told the story.  But so also did the big smile on his face when he came to the front door after being dropped off at home at the end of his day.  He rang the bell multiple times as I went to answer the door, which told me that this was Aaron at the door……….and I wondered why he came to the front door instead of barreling in the garage door.
I opened our front door and there he stood, grinning, with four beautiful yellow roses.  Well, three beautiful roses…….the fourth rose had broken and was hanging limply among the other three.  Aaron didn’t care.  He was very happy to have brought me pretty flowers, which he always wishes he could do.  He looked so much like a little boy standing there with the three pretty roses and the one broken rose.

He barged in the door and handed me the roses.  “Here!” he said as he thrust the roses toward me……..and then shocked me to pieces by giving me an unsolicited hug.  “These are because I’m sorry for today and I love you.”
Just knock me over with a feather, would you?
I could tell that time spent with Barb and Brandy at Paradigm had softened him.  They had taken him out to lunch and helped him work through his emotions and his anger.   Barb made sure Aaron had some flowers to bring to Mom.
How about me?  I was very touched and very happy, but also very realistic.  I wish I wasn’t.  But as soon as Aaron started talking about the game again, I could feel my heart growing cold.  I was tired…….skeptical………not feeling the love at that point.
My lecture didn’t help matters at all.  Aaron and I both ended up with heated words……some even hurtful.  Did I say that I’m tired?  Not an excuse, but a reality as we deal with ongoing Aaron issues.  I just felt like part of my heart had shut down.  Feeling like, OK…….whatever…….I’m done.
Aaron knew this and he was very upset.  I think he was scared of several things……scared of mom being cold……….scared of mom not loving him…….scared of losing his game forever.  And I felt like losing the game was all that mattered to Aaron, yet I couldn’t deny the fear and the anger on his face as we ate supper and he lashed out verbally at me to Gary.
Thank the Lord for Gary’s calmness and wisdom as he stood strong to be the buffer between Aaron and me.  Finally, Aaron made two things very clear.  First, he wanted me to keep the flowers and put them in a vase, which I did.
Second, he gave me the ultimate insult.  “Mom, you can just watch Wheel of Fortune BY YOURSELF!!!!”   He paused for effect.
“I’m going to watch it in my room BY MYSELF!!!!” he said as he stomped away.
My cold heart stayed cold.  I told him that this was fine.  But his tears told me that he was sad and hurting, and before long I found that my heart was hurting as well.  Still tired……but now sad like Aaron.
I told Gary that maybe Aaron would calm down if I took him for a milkshake from Sonic.  So Gary went to Aaron’s room to deliver this message.  We knew it would be sweeter coming from Dad’s mouth at this moment rather than from Mom’s.
I heard Aaron give an enthusiastic yes, and soon he was thumping down the stairs……….in his pajamas and tennis shoes, which made me smile…..for a change.  He sat on the couch with me and was fine, as I held my breath to see how long it would last.
I also held my tongue, which is sometimes hard for me.  I knew that no more lectures were needed right now.  What was needed was a milkshake.  But before the Sonic trip, we sat there together and watched Wheel of Fortune.  Neither of us had to watch it BY OURSELVES!!!  Hallelujah, we got to watch Wheel of Fortune TOGETHER!!!
Aaron was happy and I was happy.  Aaron even got Tater Tots with his milkshake, just for good measure.  I sat there as we watched NCIS, and I glanced over at Aaron seriously eating that favorite milkshake.  Something in my heart felt broken as I looked at him on his favorite chair, sitting Indian style.  He wants things in his world to be right.  We want things in his world to be right, too, but we don’t always have the same definition of “right” as Aaron does.  Sometimes Gary and I have to be parents, with authority and rules, no matter how Aaron reacts. 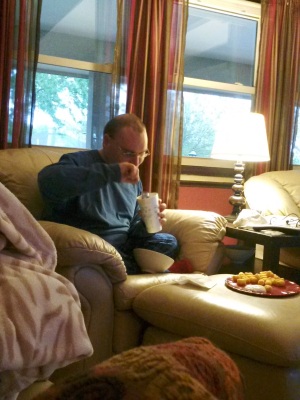 And sometimes we’re tired.  Just tired of the ups and downs, the temper outbursts, the job of understanding and connecting for Aaron when he can’t.  Or won’t.  Which is it?  Who knows?
So I’ve looked at the roses in my vase on the kitchen table.  Aaron seems oblivious to the broken rose, but I am not.  To me, it’s a perfect picture of our day and sometimes of our life.  Broken…….tired……wilted.  Broken relationships at times……….broken words………broken promises…………broken hearts.

Keeping the broken rose in the midst of the perfect roses, though, also reminds me that our life isn’t all broken.  There is beauty all around us.  A laugh…..a hug…..some progress……..a game of Skip-Bo last night…….Aaron talking about hay barrels today, which always makes me smile.
It’s also good to remember the broken things so that we can lean on God to fix them.  I sure can’t do the fixing.  I’m very thankful to know the God who can and who does, with great patience and love.
Much more patience than I sometimes show to Aaron.  Infinite love.
And He never gets tired.  He’s there to hold me up when I am tired.
I love my broken rose.  I love my wonderful Aaron.  And I’m glad that Aaron loves me, broken and all.