Skip to content
Yes, little things…….
On Friday it was 45 minutes.  That’s not a long time, really, when you think about it.  Such a little thing.
Gary’s truck had to be kept in the shop unexpectedly after an oil change late Thursday afternoon, so I told him to just drive the van to work the next morning.  Paradigm is always willing and able to pick Aaron up at the house when needed.  However, on this particular Friday morning when I texted Paradigm, they said they could only pick Aaron up early…….at 9:30.  We usually leave the house at 10:15 when I take him to meet his group.
I went into Aaron’s room to tell him that Paradigm would be there to pick him up…..at 9:30.
“But we don’t leave the house until 10:15,” he flatly said.
And I knew before any other words were spoken that we were in trouble…….I was in trouble.  I tried to reason with Aaron, but his rigid way of thinking was preventing my words from penetrating that brain of his.  The more I used reasoning, the more he objected.  Of course, his only argument was that we don’t leave the house until 10:15, but that is all that Aaron needed.
He escalated with every reasoning argument that I had, so I just had to let it drop.  He didn’t go to Paradigm on Friday.  He also didn’t get his end-of-week treat because he didn’t fulfill his obligation of going to his group and participating every day, but he didn’t care.
We leave the house at 10:15, or Paradigm comes to pick him up at 10:15…..or later.  Not 9:30.  Never early…..never 9:30.  Got it?
All of this because of 45 minutes.
Such a little thing……
Yesterday, Sunday, it was coupons.  Aaron has such a love/hate relationship with the Sunday coupons.  He came downstairs when he got out of bed, and saw the coupons laying on the table.
“I’ll do them later, Mom,” he said.  “Don’t you do them!” he added as he went back up to his bedroom.
It wasn’t long until I heard him coming back down the stairs.  “Mom, I’ll cut out the coupons later,” he repeated.
I assured him that I knew that.  Upstairs he clomped……..and soon after, downstairs he came again.
“Mom!” he said, a little frustration showing in his voice.  “I said that I would cut the coupons later!”
I looked at him with some frustration showing in my face and assured him that this decision was fine.
“But are you going to do them?!” he asked with suspicion.
And again I told him that I was NOT going to cut the coupons………that it was fine for him to wait until later………that I would just leave them on the table.
Upstairs again……and you guessed it……..downstairs he thumped.  “I WANT to do the coupons, MOM!  Don’t you do them!!” he commanded in complete exasperation.
There I sat, seemingly the object of Aaron’s anger………but I knew that his anger was really directed at those irritating coupons.  The coupons that he feels compelled to clip because he has clipped my coupons for years, although he doesn’t really enjoy the job anymore.  The coupons that only HE can cut because he tries so hard to cut them directly on each dotted line…….and Mom doesn’t try nearly as hard.  In fact, Mom makes such a mess of the coupons that only I……AARON……can clip coupons!!!
He was so conflicted over those coupons that when Gary came downstairs, unaware of what had been transpiring, Aaron bit Gary’s head off verbally and called him Mr. Bossy.  Aaron got a firm lecture from both Dad and Mom, and in total dismay at this point, he got his two coupon trash cans……..and his very own scissors, the ONLY scissors that he will use for coupons…….and the coupon box………and his fluffy pillow that he sits on…….and his cups of coffee to put on the bench beside him……and he proceeded to just go ahead and cut out the coupons.
Aaron muttered some select comments as he clipped, but we just ignored him while he settled down.  In the meantime, I was fixing me a bowl of Cream of Wheat in the microwave.  Thinking that just a few more seconds would make my cereal the perfect consistency, I pushed the microwave buttons and turned to do something.  Soon the beep told me that my cereal was finished.  I turned to find this…… 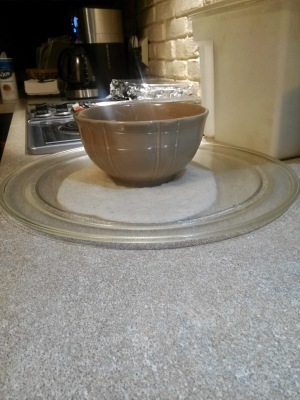 What a mess!  It was such a little thing, those few extra seconds.  But the result ruined my cereal and made me have to start all over.
Such is life with Aaron.  Little things to us can be big issues to Aaron, and even though we know this, there are times that we just can’t control the fact that little things happen…….or that these same little things have such a huge effect on him.   We can’t rearrange his thinking all the time, though we do try.  I can’t make 9:30 be 10:15 to him, much as I wanted to on Friday morning.  I can’t make the coupon stress disappear from his mind, though I have tried and tried to accomplish that.
And so often we end up with an outburst and then a huge mess, like my bowl of cereal.  It’s just 45 minutes, Aaron!  It’s just a few coupons, Aaron!
A few more seconds won’t hurt my Cream of Wheat, I thought…….but it did.  Therefore, I cleaned up the mess and I started over.
With Aaron, a few small things can cause quite an eruption.  We try to instruct……try to understand……try to intervene if possible……try to prevent them in the first place……
But sometimes small stuff happens.  Then we clean up the mess in whatever way is needed, even if it means some discipline.  We try to put ourselves in Aaron’s shoes and get into Aaron’s mind.
And when he calms down, we start over with a new dish……..a new day……..a new hour.  Waiting for the next outburst.
Such a little thing……