Skip to content
A couple weeks ago, Gary and I returned home from church and sat down to eat lunch.  We knew there might be some storms that day, but the view outside our kitchen window was of a somewhat cloudy sky with more sun than clouds.  Soon, though, we heard rumbles and noticed the wind picking up in intensity.  As we sat there, we literally watched a storm forming to our west.  The clouds darkened and built in volume, and the thunder increased along with the lightning.  It was fascinating and awesome to see the changes happen so quickly.  The power was unstoppable.  Soon there was some rain and then hail that pelted our roof and yard.  The storm didn’t last long, but the effects were felt all day as the temperatures decreased by over 40 degrees in a very short time. 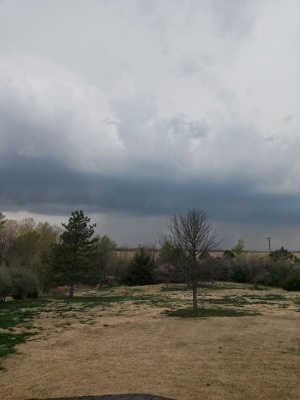 The whole process seemed so sudden to us, but the ingredients for this stormy day had been building up in the atmosphere for much longer than what we saw on the ground.  The storm formed quickly because the necessary storm components were there all along…….far away out west of us, and far up in the sky above us.  We bore the brunt of the strong winds, the vivid lightning, the loud thunder, and the driving rain and hail.  The actual storm didn’t last long but the coldness lingered all that day and into the next.

How we handled the storm and the ensuing hours afterwards made a huge difference in our peace and comfort.  I ran around closing windows while Gary took care of some matters outside.  Later, as the cold set in, we changed clothes and dressed warmly.  Aaron and I put on jackets that evening when I drove him to Sonic for a burger.  Simple matters, yes, but necessary for us during that change.
I’m pondering all this as I’ve had a morning with Aaron.  Those of you who know us through this blog, or through family and friendship, know what I mean by that statement.  Aaron was fine earlier today, but when it was time to go to Paradigm he reacted heatedly with anger and words.  He pounded on a door once, but nothing major, as I talked to him softly and tried to steer him through his anger.  I let him decide what he would do today…….stay home or go to Paradigm.  He knew that staying home had its own consequences, though I didn’t mention them.  He also knew that going to his group had consequences for him as well.  He would have to get out and be around people on a bad day; have to obey rules; have to get away from his computer and maybe go somewhere that doesn’t thrill him.
He eventually chose to go to Paradigm, but he was very much on the edge of a full melt-down.  God gave me grace, seriously, to remain calm and soft with Aaron.  It wasn’t easy.  His words were not nice.  They weren’t aimed at me personally, but they were not good words.  He was coming along as we drove to Quik-Trip and listened to some of his favorite music.  I knew that his ride would be late since we had cancelled earlier, and then changed our minds, so as I pulled into the parking lot I asked him if he wanted a sausage biscuit.  He was surprised at that offer……taken off guard with kindness when he knew that he had every right to expect punishment.  We left the store a few minutes later with his treasured sausage biscuit AND some Skittles.  And a softening Aaron.
As we waited for his ride and listened to more music, I saw that Aaron was having trouble with an itch on his back.  I had him lean forward and I scratched his back.  Then I tickled his back, which he dearly loves, and he calmed noticeably.  He talked and smiled.
“It’s just that I didn’t want to go to Paradigm today,” he said.  I assured him that I knew that as I smiled, and he just relaxed under my hand on his back.  Soon his ride came and he willingly got in their van with his kind staff.  Just a few minutes ago, Barb sent me this picture of Aaron on her couch at Paradigm.  He’s happy with his food and he’s happy with those there that care for him, and hopefully he will have a good day after all. 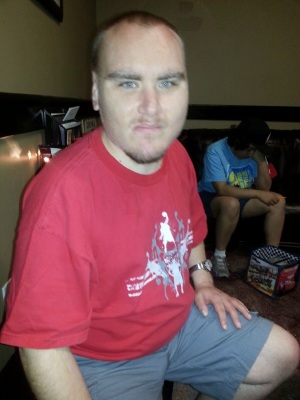 The storm blew in so quickly this morning.  I literally watched it form in Aaron’s room when I told him it was time to get off his computer.  I know that the storm ingredients were building in his mind for some time, unseen by me but there nonetheless.  I bore the brunt of the storm as I heard Aaron’s words and tensed as he hit the door.
But how I reacted………how I handled this storm……….made a huge difference in our peace and comfort.  I do not say this to my own credit.  It is seriously the hand of God’s grace reaching down and calming me in the midst of confusion and anger.  I knew what would happen if I yelled at Aaron or if I gave him impossible ultimatums at that point.  It was best to help him work through this process while gently pointing out the repercussions of his decisions.
And one more thing.  It was a time for me to practice unconditional love for my sometimes impossible son.  Unconditional……..meaning ‘not limited.’  Oh, how hard that love sometimes is!  All of us as parents can attest to this truth.  My love for Aaron is not limited to his good days……..when he makes me laugh and he obeys willingly and is polite and doesn’t even whack me on the back…..much.
Nope.  This unconditional love is for the stormy times like I faced today.  It’s a love that sees Aaron for who he is at these volatile times, and it’s a love that bundles up in the cold that sometimes follows these storms.  It’s a love that gives him a good old “A#1 back scratching,” as my dear dad called them.  I may have felt like giving his back a resounding slap, but the back scratch and the back tickle worked much better……..because it showed love and warmth to my frustrated boy.
I was at an event recently where I saw the long-term effects of a love that has been conditional.  A love based on limits and on who I am, and what I have or have not done.   This sort of limited love produces coldness and pain, not warmth and healing.  It gives no room for forgiveness and growth.  No hope of reconciliation.  How utterly sad………how wasted and unnecessary.
I don’t want that to be true of me in my relationships with anyone, and definitely not with my children.  All of us parents know a thing or two about unlimited love………..loving our children through the good and the bad……..the pride and the disappointments.
And those of us with special needs children, especially special needs that cause behavior issues, can attest to how difficult unconditional love can be.  Yet how rewarding to see the results of this love and to know that in the long run, we will reap more through love than through anger and harshness.  Sometimes we need to enforce discipline, but always with love and with forgiveness in store.
When I fail at this, which I have done more times than I can count, I have the love of my Heavenly Father.  His love is always, always unconditional toward me……….and I’m so very glad that it is, because I blow it so often.   It’s through Him that I have learned what true, unlimited love is.  And through Him alone that I can practice this love…….most of the time………with Aaron.
I hope that the storm is totally gone when Aaron comes home.  I hope the temperatures are warm and the mood is bright.  But if not……
I’ll get out the back scratcher and grab Aaron’s floor pillow and get to work on his back.  No hugs for Aaron but a good back tickle should work.
And I’ll tell him that I love him, though he rarely says those words back to me.
Unconditionally.