Skip to content
I ran into Great Clips this morning, taking Aaron for another haircut, shave, and beard trim, and who greeted us but Erin!  Erin has worked there for quite awhile.  Erin loves Aaron, if you follow me.  She’s a mom, and just a very sweet person who genuinely loves seeing our Aaron.  So it’s always nice when Erin cuts Aaron’s hair!
Erin is one of these people who just gets Aaron.  She was genuinely happy to see Aaron as we walked through the door.  She talks to him while she cuts his hair, asking him questions and interacting so well with him.  I just love having people like that in Aaron’s life. 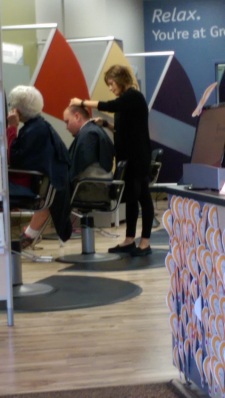 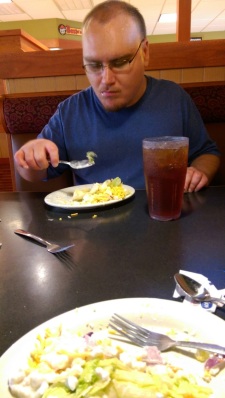 Soon the stylist called for the next customer.  “Kelly?” she called out.  And the man with the name Kelly got up and went to the salon chair.  Aaron just looked at him and then said, loudly of course, “Kelly!”  I didn’t want Aaron to say another word, not knowing what opinion he was going to give of that name or anything else that might come into his mind, so I shushed him quickly with a pat on his leg and a reminder in his ear.  The stylist who was getting Kelly ready looked over and said, “Hi, Aaron!”  She knows Aaron and her greeting surprised Aaron but made him happy, too.
Not long after, thankfully, it was Aaron’s turn and so he heard his name called.  He stood up beside me, taking his glasses off first and then his watch.  He always takes off his watch as I sit there and always tell him he doesn’t have to do that, but he always takes it off anyway.  He is oblivious to the stares of the other customers.  And the stylists always smile.  As soon as Aaron was seated, another stylist came out from the back and I heard her say, “Hi, Aaron!”  It’s so sweet how many of them know Aaron and greet him by name, with big smiles.  He IS hard to forget, that’s for sure.

Somehow, as soon as Aaron sits in the chair, he is often speechless.  The stylist asked him a question, but he remained silent, so she mostly just cut his hair and let him enjoy the experience.  We paid at the counter a few minutes later as I kept one eye on Aaron.

No, Aaron, you don’t need another DumDum.  Quit trying to put it in your pocket.  Don’t you try to sneak it out of there!  Put it back!

No, Aaron, you don’t need a Great Clips pen.  You have thousands of pens at home.  Or at least it seems like it.  Do NOT put it in your pocket.  Put the pen back!
Finally, we were finished.  The stylist was paid and given a tip.  The DumDums were still in their glass container, and the pens were perched where they belonged, with none missing…..I think.  Aaron had put his glasses on and had situated his watch halfway up his arm as he always does.
We walked to the van. I was opening my door when Aaron said, loudly, “Mom!  Mom!  Look at what martial arts does!”
And there he stood at the window of the martial arts studio in front of where we parked, pointing to the poster on the window as he made sure I noticed each martial arts move listed there.
Just when I thought he couldn’t be any more noticeable, he proved me wrong.  I was wishing he wanted to get IN the van as quickly as he wanted to get OUT not 20 minutes earlier.
Oh well, I just roll with the flow.  I figured my face needed a little color today anyway.
Do you see why I wait as long between haircuts as I possibly can?