Here are more of Aaron’s comments that I have collected over the years.  Enjoy!

Aaron was very excited today about eating at Long John Silvers. He loves the fish and the “bread balls” (aka hush puppies).

Aaron was telling me what he  read in his weather book last night. His take: “The book said it got so cold once that it ruined the whole beer crop!!” Oh, my goodness!!! And I couldn’t even belly laugh.

I wanted to show the plate that Aaron recently made me. He brought this home a couple weeks ago, as pleased as he could be…..even though he says he doesn’t like art. Look at how he ran out of room to put the last “m’ in “mom,” so it’s at the top. HaHa! I LOVE this! I put it on a stand and have it displayed with great pride on our kitchen server. ♥ 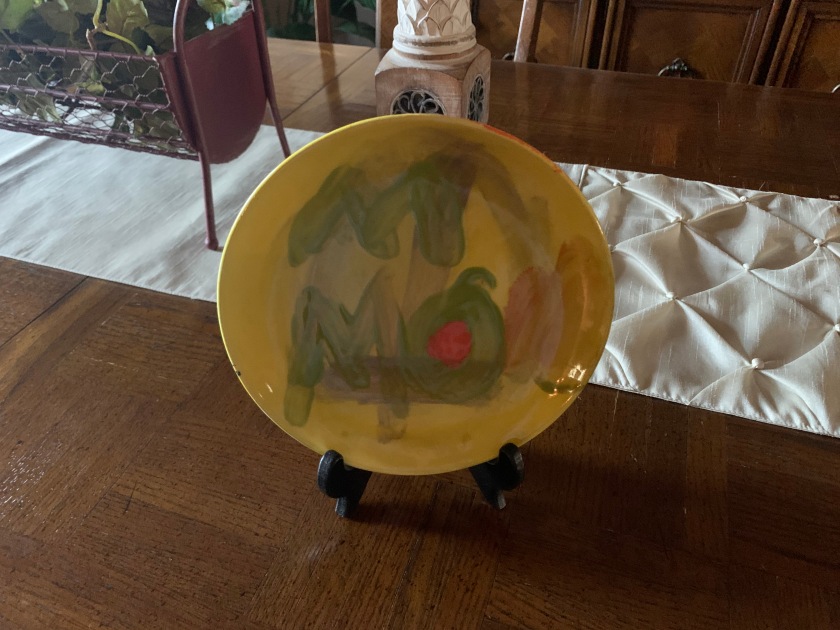 Aaron didn’t make his bed this morning. When I dropped him off at his group, he got out of the van and then said, “Oh Mom, can you help me make my bed today while I’m gone?” Help him while he’s gone? Clever, Aaron! I think you just asked me to make your bed FOR you, period.

Sitting at lunch yesterday, there were two guys in the booth behind us. Aaron, who doesn’t know how to whisper, said – “I can hear what they’re talking about!” Reminded me of the time when we had a guest preacher at church and Aaron “whispered” – “Would someone tell that man to be quiet?!” How red can my face get before I actually have a stroke?!

Aaron was talking to us on Saturday about how someday he will need to leave our house and live somewhere else. He doesn’t like that conversation. I used Andrea as an example of leaving home, moving to Texas, and living in an apartment until she and Kyle got married. We told him that she was very happy to be on her own when the time came for her to leave. He talked to Andrea on the phone about it later and she repeated what we had said.

Mom and Dad were talking to me about how they’re going to kick me out of the house. Andrea moved out of the house when she went to Texas, and she was happy until she married Kyle!

Aaron needs me to be his full-time interpreter and supervisor of damage control!! 😆😆😆

Aaron: Mom, I ate a marshmallow, raw! I noticed it didn’t have much taste. 😁😋

Aaron and I took Jackson for a walk on this beautiful day. Aaron: “I wonder if Dad will be home later.” Me: “Well Aaron, Dad always comes home.” Aaron: “But I meant a different kind of later.” The scary thing is that I understood exactly what he meant!! HaHa!

Aaron called me today and told me that he was going to Quik Trip with one of his staff. He had money burning a hole in his pocket, so he asked me what he could buy with it. First of all, I told him no candy. Then I mentioned a salad or fruit. He countered with the idea of corn dogs. I gave in but said to buy no more than three. When I picked him up, he told me that he did get three corn dogs, and a large water. Later, he saw me fixing supper.

Me: Egg casserole and salad. Are you eating?

“Mom!! When they put those staples in, I could feel the hurtness!!”

Enjoy your day, dear readers.  I WILL be back, trust me, with more of Aaron’s sayings.