Skip to content
Aaron was up early again this morning.  I mean very early, long before Gary and I were out of bed………and we don’t sleep late.  I heard Aaron on his monitor, so I reached over to turn it off and hoped to catch a few more winks.  Jackson had already gotten me up during the night to go outside, and I had still been awake to see the shining of my digital clock at 12:30 something……….so I was moving very slowly when I finally went downstairs a little after 7:00.
But not Aaron.  No………Aaron was chipper and happy and full of talk.  I was mostly non-verbal at this pre-coffee stage, but Aaron didn’t care.  He stood outside the bathroom door talking to me, and I knew it was going to be one of those mornings.  I sometimes feel like I still have small children between the dog getting me up some nights, and Aaron arising early, full of chatter and questions and much information that he wants to share….whether I want it or not.
I was at the one syllable word stage as I sipped a cup of coffee, but Aaron wasn’t fazed.  He told me that he was hungry, even after eating a bowl of cereal when he got up very, very early.  He asked for tomato soup.  Tomato soup at 7:30 in the morning?  Yes, tomato soup, he said.  Well, that was easy enough, and he was even happier and more full of talk as he slurped his soup and I slurped my coffee.
“Mom!” he blurted, “the day before last night I was reading about that place during war.  It’s in Texas!”  This brought a small smile to my face.  The day before last night.  As if reading my mind, he clarified by telling me that it was Thursday night that he read about that place in Texas during war.  “The Alamo?” I asked.   “That’s it!” he said.  “I bet Andrea would know all about that!”………..as if Andrea living in Texas would now make her an expert on the Alamo.  I’m fairly certain that sometime Aaron will ask Andrea all about the Alamo, too.
Maybe it was partly the coffee, but Aaron’s way of expressing himself was also  responsible for my smile.   I was warming up to this morning, and especially to sharing it with Aaron.  I’m used to some quiet time before he gets up, but lately that’s changed.  I may as well be thankful that he was in a good mood, and then decide to share that mood with him.
Soon my smile was even bigger.  Something made Aaron think about having pets, which made him remember a conversation he recently had with Barb at Paradigm.  “Mom,” he said, “Barb, she does not have pets……….but she just has those children.”
I laughed out loud at this one.  Oh Aaron, you do have a way of saying things.  Yes, you do.
Later, we were up in his room looking for his missing wallet when I noticed this in his trash can. 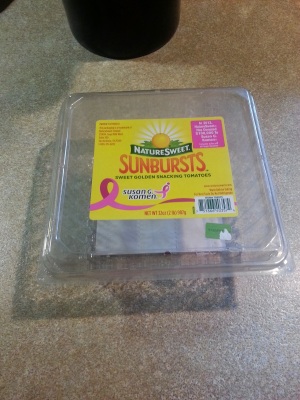 It’s the large container of Sunburst tomatoes from Sam’s.  We had eaten a few but there was almost a whole container full when they were last seen on the kitchen counter the night before.  I hadn’t even missed them this morning, but there was the evidence in Aaron’s trash can.  I held up the empty container and asked Aaron if he had eaten them all.  He sheepishly said that he had eaten them the night before……….every single one.  That might explain his frequent bathroom trips this morning.
He went on to explain, “Mom, I was really hungry last night!  My stomach……..it’s like it was flat in!”
He further emphasized what it’s like to have a “flat-in stomach” from such severe hunger.  And then he asked, “Mom?  Have you ever had a flat-in stomach?”
OK.  Conversation over.  I know where this will lead………and the talk earlier in the week of how I would look in Vanna White’s skinny dresses was still fresh on my mind.
I made my escape without answering the question………and I’m still smiling at my morning with Aaron.  It’s more than the coffee, too.  It’s just Aaron being Aaron that’s made my morning brighter.