You know how you feel if you see a sign while you’re driving that says, “DANGER AHEAD!!”   Well, it’s not like we see those signs often, if ever, but in my life with our autistic Aaron there are most definitely sure pointers to a certain danger lying ahead of us.

Well, I knew we were probably in for a rough road ahead with Aaron.

Aaron…who would come home from school at a very young age with holes torn in his shirt because he had angrily ripped the tag out.  The tag irritated him and so I learned to cut tags out of each of his shirts.

Aaron…who furiously rebelled at wearing jeans when he was young because he only wanted “soft pants.”

I could go on, but you understand.  And so do many of my special-needs friends and other parents I don’t even know who are facing this mask dilemma with their tactically sensitive children…young or adult.

Aaron and I pulled into our Aldi parking lot when I decided to have him wear a mask for the first time.  Actually, I had been plotting this day for awhile.  I took Aaron for a nice walk nearby at Nellie’s Pond.  We sat on a bench and watched a family of ducks.  We watched people fishing.  We watched geese munching on grass nearby.  We were relaxed and happy.  A perfect time to broach the irritating subject of…MASKS!!

I helped Aaron with his mask before we exited the van.  He was not too happy, to say the least, but he did keep it on.  We hadn’t even opened our doors yet but I was telling myself, “So far, so good!!  The mask is ON his face!!”

“Okay!!” I happily exclaimed as we met at the back of the van and I took out my shopping bags.  “Let’s go shopping!”

We had taken only a few steps when…

“This is all TRUMP’S fault!!”  Aaron angrily responded.

For some strange reason, since the virus first became an issue, Aaron had an issue with Trump.  He blamed the virus and the disruption in his personal life on Trump.  Who knows why?!

“Aaron,” I reprimanded firmly, “stop saying that!  Do NOT say that in the store!”

Aaron was quiet as we walked inside.  As he looked at some cookies, he made a comment about them and then stopped mid-sentence.

“My VOICE sounds funny!!” he blurted out.

“Then just don’t talk, Aaron,” I replied with impatience.  I walked away and Aaron followed, with me dreading what the next outburst might be.  I just wanted to hurry and be done with our shopping.  When Aaron gets upset like this, there is no pleasing him.  No pep talks.  No consolations.  No smiles (he couldn’t see them under my mask anyway!!).

Really, nothing helps but to end the misery and I was determined to not give him an easy out.

Through the rest of the store he pointed out people who weren’t wearing masks.  I glared at him with my best glare!

He complained about being uncomfortable.  He said his ears hurt.  And the second we stepped up to the register line, he was done.  Off came the mask!

All in all, though, I thought it went pretty well.  Trust me.  It could have been FAR worse!

The following weeks have seen progress with Aaron and his mask.  Look at him here at his doctor visit in June!

But there was a big hurdle ahead…one I really dreaded.

Going back to his day group, Paradigm.

Masks were being required there, although his wonderful staff said they all understood that not only Aaron but several of the clients might have serious issues with wearing a mask all day.

His first day back last week started out a little rough.  I walked in with him and my heart sank as he at first refused the hand sanitizer, and emphatically said NO each time he was reminded to wear his mask.  I left there and drove home with a very heavy heart.  But later, after he ate, he was told to look around at how everybody else had on a mask.  So he put his on and has done well every day since.

I was talking with some of the staff later in the week.  They are amazed at the resilience and adaptability from these special-needs adults.  They have so many challenges already on many various levels, yet there they are in their day group…happy, chatting together, eating, laughing, not able to go out in the community right now, some sitting in wheel chairs, struggling with all sorts of health issues and other problems…and they’re wearing their masks.

They’re not arguing about whether masks do a good job.  They’re not talking about conspiracy theories.  They’re not reading the latest media stories or listening to all the debates.  They just know that they are, at this point, required to add one more uncomfortable thing to their already uncomfortable lives…so they do it.

They just do it.

Sometimes I wonder if our special-needs ones, full of so much discomfort already, have an easier time adapting to just one more discomfort than do we.

We…who are acting a bit spoiled, I might add.

I have ONE thing that’s irritating to me on most days.  A mask.

I don’t have the myriad issues that Aaron and his friends at his day group have.

Then why am I the one that is quick to complain?

I am humbled, once again, at our wonderful special-needs population…many of whom were unable to be with their families for weeks as they were in lockdown in their group homes.

I am humbled by the parents of our special-needs angels…parents who are exhausted and worried and have yet one more huge concern to add to their already full plates.

So let’s follow their example and just do what needs to be done right now, thanking God for each day and not letting our little inconvenience of wearing a mask turn us into absolute grouches.

Smile along with Aaron, everyone! 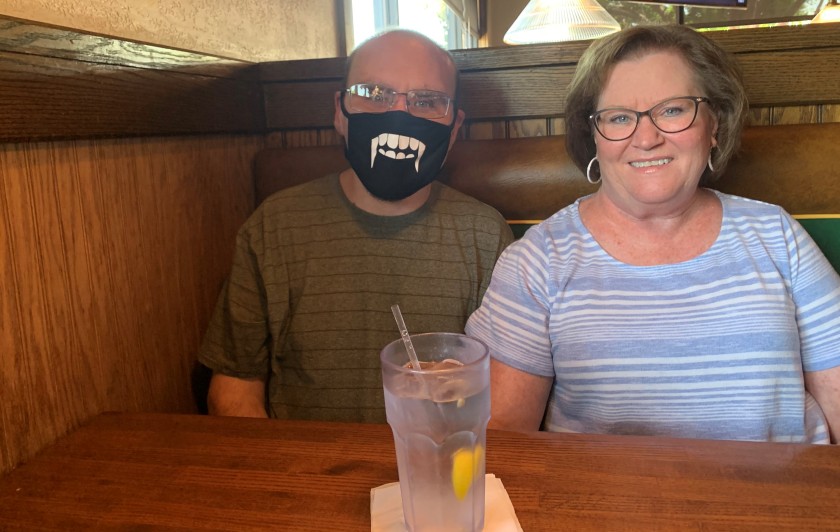 Our governor announced a mandate today saying that we must wear masks when in public, starting this Friday. And now it begins – the mask debates and opinions and shared articles, pro and con. I get it. All of you know I do. You know that I have shared my portion of opinions on various subjects. I don’t think it’s wrong to do that, but I do wonder what we as Christians are accomplishing.

Have we forgotten that God has ordained this time in history, and has also planned for you and I to be alive right now? What does He want us to say and do?

Just this morning, in my study of the book of Acts, I read the first four verses of Acts 8. Stephen had just been brutally stoned. Then Saul went on his horrible rampage, even entering the homes of Christians, dragging them out and putting them in prison. Christians were scattered all over Judea and Samaria.

Just think about that. Think about the fear you would feel. The awful fear of facing that kind of persecution or of having to run away from your families and friends, from your home and your town. Fearing prison or even death. Being hungry and homeless. And probably battling deep anger.

So what did these believers do? Verse 4: “Therefore, those who had been scattered went about preaching the word.”

They shared the gospel.

If they were us, today, in our crazy world – what would they do? Argue about masks? Complain about quarantines or stay-at-home orders? Scour the internet for articles that confirm their beliefs? Deride those who don’t agree?

Doesn’t quite fit what I read in Acts about our early church family. And they were going through tons more than we are right now.

I find that thought, that knowledge, to be very personally convicting. We have a chance right now to talk to people who might not ever listen otherwise to the good news of Jesus. People who are vulnerable and scared and angry.

Why waste energy and time on feeding the frenzy right now? We need to feed people the Bread of Life. We need to get together with other believers and pray. We need to be in our Bibles.

Satan wants to mask any effort to share Christ with a hurting world by making us distracted by the unimportant. We can’t let that happen.

How I pray that we, the Church, will be the light in this darkness that will point others to the Light of the World. 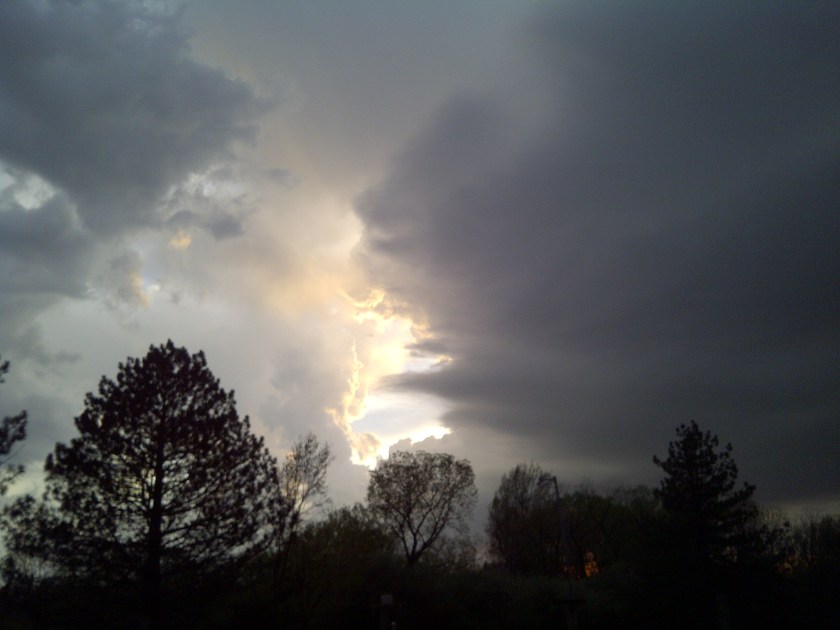