Skip to content
This past Saturday was a big day for Aaron.  That’s the day that we had his room painted.  The popcorn ceiling was removed and then the ceiling was painted; his walls were repaired and painted; and then the hall bathroom was painted as well.  “Us kid’s bathroom,” as Aaron calls it.  It’s fun to have a room painted, especially when you’re not doing it yourself.  We hired our neighbor’s friend, Rudy, to do the job for us.

But for Aaron, it’s not fun to have a room painted…..especially when the room is his room.  He doesn’t care who is doing it.  He just doesn’t like all the ways that it affects him. Of course, we know this about Aaron.  That’s why we started preparing him for this big event a week before the job was to be started.  As we were eating on that Sunday, we told him with excitement that his room would be painted that following weekend.  We exhibited the same enthusiasm as we told him that we would need to move all of his furniture, except for his bed, out of his room before the painter came on Saturday.
Aaron tilted his head as he often does and was silent as he thought about what we had just told him.  He was staring out ahead, but we knew that in his head things were happening.  You could almost hear the wheels turning as Gary and I waited with apprehension for his reaction.  Finally he spoke.
“Are you moving my book shelf with all my DVDs on it?” he asked.
We told him that we were going to move it.
“They need to be in order!” he told us.  “You’re not taking them off, are you?”
We assured him that we could move the book case without removing his DVDs……DVDs that are in a particular order and should not be disturbed by us mere mortal parents who have no idea of the importance of that order.
On the next day, Monday, during supper again, Aaron asked about having his room painted.  “You’re not messing up my DVDs, are you?” he once again asked.  And we once again assured him that we would not mess them up.
“Well, can I play my computer?  Will it be messed up?” he anxiously asked us.  So we assured him that his computer would not be messed up and that he would be able to play it again.
“After the room is painted, can I hang my calendar?” he wanted to know.

We told him that he could hang his calendar after we decided where all his new wall art was going to be hung…..but yes, he would definitely have his calendar.  The smallest things are huge to him.  There is no such thing as a small change in Aaron’s life.
And later that night, we heard the question again.  “So you’re moving my book shelf and DVDs?  You won’t mess them up, will you?”  This is when I began praying that we wouldn’t tip the book case over and spill the DVDs.  I couldn’t even imagine that scene.
On Tuesday, Aaron looked at us with worry as we told him that we would move his things out of his room on Friday night. “Can I play my computer just one last time before we paint my room?” he questioned.  He sounded like he was making his dying wish, for heaven’s sake!  This was just Tuesday, but he was wanting to be sure that on Friday night he could play it just before we moved it.
Over the next several days, he continued to ask questions and to try to adjust to this huge coming disruption.  The big move on Friday evening went smoothly.  Gary even hooked Aaron’s computer up in Andrew’s room, still on Aaron’s own desk, and he was one happy camper…..despite the change.
We then broke the news to him that he would be sleeping in Andrea’s bed on that night.  He was very skeptical about this prospect.  I praised her bed and extolled all of its comfort and convenience, but he wasn’t convinced.  He said it wasn’t the same size as his, and I told him it was.  He said his sheets didn’t fit on it as well as I took her sheets off and put his on, but I told him they did.  I shot down all of his arguments as we placed his covers on the bed in their particular order that he likes and as we placed his snake, skunk, and frog in their certain places.
I got him tucked in, turned the light off, and said one last good-night as I closed the door.  I went to my room, but it wasn’t long at all before I heard that he was out of bed.  I opened his door and found him sitting on the bed, signing his bedtime log.  Of course.  It’s important for him to record the time he goes to bed and the time he gets up.  Once that was done, I tucked him in again and turned off the light.  He was in bed once again.
I was washing my face when I heard the knock on our bedroom door.  “Mom?” I heard Aaron ask.  “Can we watch Wheel of Fortune tomorrow?”
Yes, Aaron, we’ll watch Wheel of Fortune tomorrow.  Now go to bed.
“Well, I don’t really want to sleep in Andrea’s bed.”
Go to bed, Aaron.
So he went to bed, where I tucked him in once again.
It didn’t take long until there was another knock on our door.
“Is it going to rain?” he wanted to know.  I told him I didn’t think so.  “I mean, like a storm?” he asked.
No, Aaron, it’s not going to storm.  Go to bed.
He went to bed again.
Soon I heard it.  Thump, thump, thump.  Aaron was going down the stairs.  He was back upstairs before long, where he told me that he went downstairs to say something to Gary…..anything to keep from getting in bed.
Aaron…..Go.  To.  Bed.  He did.  And he stayed, thankfully.
His report the next morning:  “I didn’t sleep well.  It’s not like my bed where the covers don’t move a lot.”  I didn’t have the energy at that point to ask him to explain that one. 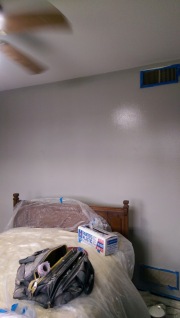 Aaron handled the actual paint day very well.  He stayed busy on the computer, talking to us, going outside to sit by the garden and relax in the leaves and sticks, and generally ignoring what was happening in his room.  He showed no excitement or interest at all.  His biggest concern was his shower that night.  He couldn’t use “us kid’s bathroom” since it was still wet.
“It’s 8:00,” he said.  “I need to shower.”  His shower is at 8:00 every night, or shortly thereafter.  NEVER before 8:00.  Just so you know.  We do.
I took his towel and pajamas into our bathroom, which once again didn’t thrill Aaron.  “I wish this man wasn’t here,” he lamented.  “And I wish I was back in my room.”
Well, the next night he WAS back in his room.  I was worried because Gary wanted to move Aaron’s furniture around.  I just knew that this would tip the boat, and be too much change for Aaron.  We used our excited voices when we showed it to him.  All he cared about was:  were his DVDs messed up; was his computer going to work there: and when could he hang his calendar.  He was pretty unimpressed with everything else, and pretty irritated as we showed him some new things about his room.
“You guys think I don’t know anything about my room!” he impatiently told us.  So we kept quiet as he went on playing his computer game. The amazing thing was that he handled the new room with ease.  That was a surprise for me!  He even slept in his bed that night, happily, despite the fact that his nightstand holding his lamp and his clock were on the opposite side from where they usually are.  He’s also putting his Handy Answer book on his night stand shelf instead of on the floor like he prefers, and tried to do the first day.  Progress!!

He followed me as I carried his coffee upstairs to his room on Monday morning. “Can we put the coffee on the shelf like we used to before that man came over?” he asked.  He refers to the painter, Rudy, as “that man.”  And he says it with an element of disgust, so it shows me that he really is somewhat frustrated by all of this change.  And he blames it on our painter, because Aaron has to blame someone for his discomfort.
Aaron’s room being painted is a huge improvement, though he doesn’t seem to care one bit about it.  But just as huge is how well he did with this interruption to his routine, and how easily he has adjusted to his new room.
Also huge:  his DVDs didn’t get one bit messed up.  Thank you, Lord!!!