Skip to content
The last blog I wrote told about Aaron’s difficulty in returning to his routine.  He had a very difficult three days as he adjusted to leaving the house every morning and going back to his day group.  Monday wasn’t too bad, Tuesday was awful, and Wednesday was very “iffy.”  I wrote about Tuesday……the slumped shoulders, sitting in the rocks, actually throwing some rocks, etc.  On Wednesday, I went into the building ahead of Aaron because he said he wasn’t getting out of the van.  I just got out and headed inside, and so he followed me.  He talked to Barb, who knows how to calm him, but he kept saying he wasn’t going to stay.  Barb said she would just drive Aaron in her truck over to where Bryan was working on a house, so Aaron walked outside with her, all the while saying that he was NOT staying at Paradigm.  I just stayed mostly quiet.  Aaron stood at our van, but finally went with Barb and then had a good day.  I drove away just asking God for wisdom, patience, and strength.  We ask God often for those three things when it comes to Aaron.
Later Barb and I texted.  She said Aaron was totally fine the rest of the day.  I told her that I think he is testing me, and she said that they would do everything they could to see that I passed the test.  And the staff at Paradigm truly does just that.  They know Aaron, and they know how to work with him….how to calm him……how to understand what’s behind his actions, when they can understand.  Sometimes no one can figure him out.
Bryan and Aaron worked together all week on different house projects…..residential settings that Paradigm manages.  Aaron was quite proud of the fact that he helped Bryan put tile down on a floor, but on Thursday he brought a piece of the “tile” home and we saw that it was actually laminate flooring.  It wasn’t long before Aaron had given me a resounding whack on my rear with his little plank, and he got a good lecture from me.  I learned the next day that he had done the same to Barb.  He just never seems to get it…..rarely is able to control those impulses. 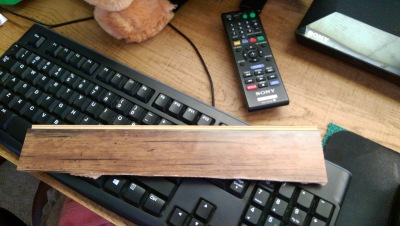 Anyway, he came home on Thursday all smiles as he couldn’t wait to show me what Bryan had fixed for Aaron to wear around his head as they worked.  It was fun to see Aaron smiling and so happy.  He went from his slumped shoulders on Tuesday: 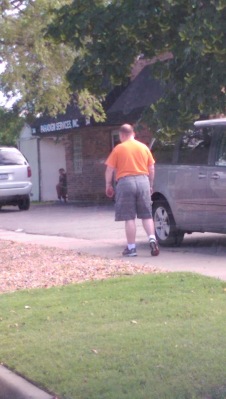 To a face full of smiles on Thursday: 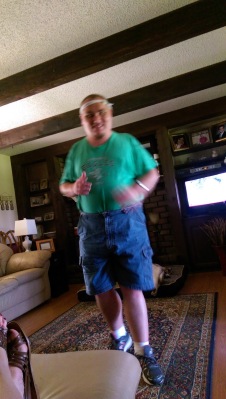 Today he said, “Mom, Bryan told me that I’m his number one man.”
“Oh, Aaron,” I replied.  “That is such a nice thing for Bryan to say!”
“I think it’s weird,” Aaron flatly replied……which made me laugh……which Aaron also thought was weird.
He’s so funny.  Last night he was watching an alien movie in his room, having a blast.  But when he came downstairs and saw a sweet family scene on the movie “McFarland,” he said, “That’s weird!”  So for Bryan to call him his number one man seems weird to Aaron, but deep down I think Aaron loves it.  He just doesn’t know how to convey that sentiment like we do.
Just like he doesn’t know how to handle his frustrations over returning to real life after a month away.  Instead of sitting and having a conversation about it, he has to yell and threaten and cry and throw rocks.  Then our frustrations mount, and we have to be so careful how we handle it.  I’ll admit that it gets old.  Gary and I were talking about it last night.  We really don’t know what a “normal” life is at our age.  Other parents of children, young or adult, with behavior issues know exactly what I mean.  Yet there aren’t many great alternatives, and we do love Aaron.  God gave him to us, so we just take one day at a time.  And we are ever thankful for people, like the staff at Paradigm, who work so well with Aaron and help us on this journey.
We see progress with Aaron, but his core issues will probably always be the same.  I’ve always tried to see the humor in so many things that he says and does.  Sometimes I don’t have to look hard, for he truly is so funny so often.  On Friday, our electricity went off a couple times, so Aaron’s clock by his bed was messed up.  As I was helping him get everything ready for bed, he asked me if I would set his clock.  I told him to look at his satellite clock beside his desk and tell me the exact time so that I could get it right on his night stand clock.
“OK, Mom.  It’s 10:05,” he said.
So I punched the buttons for the hour.  Then I did the same for the minutes.
“It’s 10:06 now, Mom!” he told me.
And wouldn’t you know, I punched just one too many and the clock said 10:07.
“Oh well,” I said.  “One minute won’t matter, Aaron.”
Who was I kidding?!  And I knew it.
He just stood there staring at his clock.  And I knew that one minute did matter.  It mattered very much to Aaron.  He can halfway brush his teeth.  He can wear the same pair of socks for days in a row, seriously, if I don’t catch him.  But one minute too fast on his clock is not tolerable.  Not at all.
“No,” he replied.  “I want it at 10:06.”
So I hurried and re-punched the buttons, but by then it was nearly 10:07.
“Wait,” Aaron said.
And he began counting the seconds.
“48…49….50….51…” he continued.
And when he said “60!” and the time was now officially 10:07, I punched the little button very carefully, ONE time, and then all was well.  It was 10:07 on his nightstand clock and on his satellite clock.  They were synced correctly, and now Aaron could go to bed.
If only he would sync his life to ours as easily!  If we could just punch a button here and a button there, and make us all line up together in harmony…..wouldn’t that be awesome?
But I know if we did that, then we would also miss a lot along the way.  Like I told Gary last night, even in the midst of our tiredness and sometimes deep frustrations, we really can look at many amazing facets of Aaron.  We just need to remind ourselves of that on some days when no matter how many buttons we push, things just don’t line up the way we want.
Honestly, on many days we end up syncing ourselves to Aaron.  We can pretty well predict how he’ll react to different situations, and what he’ll say.  He doesn’t sync himself to us nearly as well, but when he does it’s cause for celebration.  Like how he made it through this week and the expectations that were made of him.  It was a huge accomplishment for Aaron!
But tomorrow morning may be another story.  I need to remember that ONE minute.
48….49….50…..51…..