Skip to content
Aaron seems to have almost fully recovered from his no good, very bad seizure episodes that began on Thursday night and went into early Saturday morning.  This was a tough round for Aaron, taking a huge toll on him physically and mentally.  He slept and slept…..he’s been very slow in both mind and body…..and he hasn’t wanted to eat much.  Not eating much is a sure sign that he isn’t himself.  He also developed a sore throat that didn’t help, and of course his bitten tongue has made eating difficult.  Yesterday, on Sunday, we saw more of the old Aaron return….and it was a welcome sight, even when he was trying to feed the dog.
On Saturday he finally woke up “for real” around 12:45, meaning that he was more alert and more able to really talk to us.  It was around lunch time….although we know lunch time to Aaron is as close to 12:00 sharp as he can make it……but I offered to heat him some potato soup anyway.  I had made the soup the day before…..the day of his terrible seizures…..but all that day he hadn’t been able to eat a thing.  I hoped he could enjoy his favorite soup on Saturday, so I heated him a bowl.  He couldn’t eat it, though, stopping after managing only a couple spoons full.  I put it back in the frig, and he hasn’t touched it since. 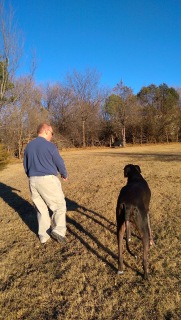 Something else unusual is that he offered to take a shower without being prompted.  He actually wanted to shower, so as soon as he was steadier we let him get cleaned up.  Later, he and I went on a walk around the yard with Jackson.  It was good for Aaron to get some fresh air on that beautiful, warm January day.  Then we soon got in the van and drove up to check out the car wash, which was still too crowded, so we went on down to the Little Caesar’s pizza shop.  He and I waited in the drive-through line, and soon I looked over and asked Aaron if he wanted some bread sticks.  I rarely let Aaron have bread sticks, though he always wants them.  He just doesn’t need the extra calories when he’s going to eat so much pizza.  He was very surprised when it was ME who brought up bread sticks.
“Yeah!!” he responded when I asked him if he wanted them.  His eyes brightened and he was very happy…..and I was happy, too.  What a little thing that meant a LOT to Aaron.  And to me, if anyone deserved some bread sticks at this moment, it was Aaron.
Once at home, he only barely managed to eat one piece of pizza and one bread stick.  Normally, he would have tried to wrangle that whole pizza down his throat, plus all the bread sticks.  Honestly!  But not on Saturday, when he was still recovering, and also fighting that sore throat and damaged tongue.
Aaron continued to recover yesterday, gaining his strength and his spunk.  His appetite still wasn’t back to normal, but he was talking more and managing the stairs more easily.  He began to watch his Indiana Jones movies that he had started last week…..and we knew he was feeling more like himself when he started talking to us about them as well.  I know that Gary and I will soon tire of his repetitious talk about these movies, but I also know that we will relish having old Aaron back with us.  Remind me I said that in a day or two when my brain is numb from his constant talking.
I stood in Aaron’s room on Friday night, when he was still so affected by the seizures, and I watched him get ready for bed.  I helped him get the covers on his bed just right according to Aaron standards, and then I stepped back as he finished his routine.  He was slow and unsteady, but nothing was going to stop him from getting his room exactly perfect.
He carefully pulled back his covers, and every bit as carefully placed his stuffed snake in his bed.  He made sure that Mr. Snake was very straight, with just enough of his head on the pillow.  Then Aaron took his old stuffed skunk and placed him right beside Mr. Snake, just so-so.  The skunk’s little tail was arranged correctly, along with his paws and his head.  Aaron didn’t speak a word, working slowly with purpose……and slowly because of the seizure effects.  He pulled the covers up when he was finished, letting Mr. Snake’s snout still show, but totally covering the little skunk.

Then Aaron smoothed out any wrinkles that he had made in his covers before he headed around the bed to pull back the covers on his side.  He got his long pillow situated just the way he likes it, pulled over to just a certain point that only Aaron knows.  He made sure that his nightstand items were still where they were supposed to be, in the right place and order.  Then he picked up his notebook in which he writes the times that he gets up in the mornings and the times that he goes to bed at night.  He had to write in the time for that morning since it was blank because of his seizures.  I watched him write 8:17 A.M., although I knew that was not the correct time that he got out of bed.  I wouldn’t tell him that, though, not for anything.  Then he wrote down his going to bed time and carefully closed his notebook, placing it back in the floor with the pen on top, just right.

He still had his glasses on, so I asked him if he wanted me to put them on his bookshelf for him.  He agreed as he slowly took them off, handing them to me.  “Put them by my watch,” he instructed me as I turned to lay them on the top shelf.  So I did as I was told, and I laughed inwardly as Aaron leaned around to examine my placement.  I hoped it was correct…..and it was….so Aaron was finally, I hoped, ready to actually get in his bed for the night.
I got his covers pulled up close around him the way he loves, and we talked for a minute before I turned his lamp off.  But just as I was shutting his door, as he so often does, I heard him say, “Mom?”  So I opened the door and said, “Yes?”  And he paused before I heard, “Mom?  Is it almost 10:00?”
“Yes, Aaron, it’s almost 10:00,” I assured him.  You see, Aaron can barely tolerate going to bed before 10:00.  So just as his snake and his skunk and his covers and his pillow and his nightstand and his going-to-bed and his getting-up times and his glasses beside his watch and his covers pulled up…..ALL had to be JUST right…..so did his actual time to bed.  Or at least as close to right as possible.  He had to ask, even though his clock was there beside him on his nightstand right where it was supposed to be.  I guess he just had to hear Mom confirm to him that it was near enough to 10:00 to go to sleep.  The world would still turn, even though it wasn’t exactly 10:00….or later.  So I closed the door and Aaron quickly fell asleep.
Aaron doesn’t act like his seizures greatly concern him.  If they do, he doesn’t say much about it.  He has wished that he didn’t have seizures and that he didn’t need to take pills, but he doesn’t seem to get depressed or sad about it.  He manages to push on ahead despite the pain and the side effects that the seizures cause.  But don’t mess with his bedtime routine!  Don’t ask him, if he has any cognizance at all, to go to bed with his two stuffed animals out of place or his covers wrinkled or his glasses not beside his watch or his time not written in his notebook.  That would be disastrous!
These facts are some of what is so amazing about autism, and about Aaron.   I guess, in the long run, it helps Gary and I handle the stresses of Aaron’s situation a little easier.  We talked about Aaron’s bedtime routine that night, and we laughed…..when there hadn’t been much to laugh about that day, for sure.  We laughed because Aaron is truly unique, and his being unique is often a cause for us to smile and even laugh.
I can’t take away Aaron’s seizures, but I can usually accommodate his desire for order and routine in his world.  My world, and Gary’s world, may be anything but orderly in the process…..but that’s OK.
And one more thing.  You know the saying, “Don’t sweat the small stuff?”  With Aaron it’s just the opposite.  He DOES sweat the small stuff, and seems to let the big stuff roll off his back.  Sometimes that’s very freeing when we stop to consider that the big stuff in Aaron’s life is at times really serious.  It helps get our minds off our sadness and fear as we are pulled by Aaron into focusing on stuffed snakes and wrinkled bed covers.
Leave it to Aaron to pull us into his world, and to get our minds off of our other worries……with a stuffed snake, no less!