Aaron has always been easy to please when it comes to food.  He’s never been a very picky eater.  You can tell that by looking at him.  🙂   Probably his very most favorite food is lasagna.  He loves, loves, loves lasagna…….pretty much on a scale with Garfield.
In fact, I found a new recipe last weekend for Garfield’s Skillet Lasagna.  It looked so delicious that I decided to try it.  I cook mostly low carb but an occasional treat like lasagna never hurt anyone, right?  Especially Aaron!
This past Monday I told Aaron that for supper I was fixing Skillet Lasagna.  All Aaron heard was the word “lasagna” and so he was all about it.  I informed him that it was a new recipe and was made in the skillet, but that didn’t mean a lot to Aaron because he still only heard the lasagna part.  Until he walked into the kitchen when I was making this new Skillet Lasagna……
He peered down into the large electric skillet that held the Skillet Lasagna.  He backed up then, like he does when he sees something new and suspicious.  He kept staring.  Then he finally spoke.
“It’s not gonna look like lasagna.” 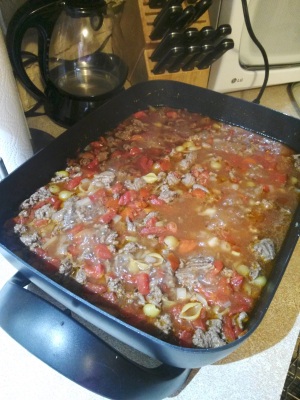 That was it.  I knew we were in trouble.  Therefore I embellished the wonderful attributes of this new Skillet Lasagna.  The hamburger……the tomatoes……the seasonings……the noodles……the CHEESE!!
But Aaron left the kitchen deeply disappointed because this new dish was not the lasagna that he loves.  Skillet Lasagna is not Oven Lasagna.  Period.
He ate the Skillet Lasagna with Gary and me for supper that evening.  He liked it, but he didn’t love it.  Skillet Lasagna just wasn’t Oven Lasagna.  I had to agree with him on that, though I didn’t let him know it.
The next day Aaron stayed home because we had a meeting here at the house with a coordinator for his new state insurance.  After our meeting was over, as Patrick and I stood on the porch talking, Aaron bounced out the front door with a question.
“Mom!  What’s for supper?  Can we have TRUE lasagna?”
I explained the story to Patrick as he laughed, and I told Aaron that we weren’t having lasagna that night……..Skillet or True Lasagna.
But yesterday, Friday, was a different story.  Aaron was having a good morning because he knew that his day group was going to go see the new Transformer’s movie.  He was happy and compliant.  He also knew that he would get his Friday surprise if his last weekday went well.  This day was looking good!
So to make it even better, I had one more surprise for him.  “Aaron,” I said.  “Would you like me to make lasagna for supper tonight?”
And immediately, with great hopefulness in his voice, he said, “NORMAL?”
I laughed as I told him that yes, I would fix normal lasagna for supper.  No more of that silly Skillet Lasagna that is far from normal. 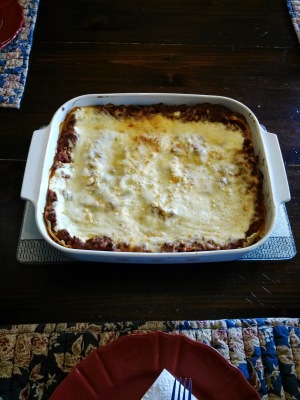 Having things normal is very important to Aaron.  Of course, sometimes his normal is anything but………to us.  But not to him.  So this week Skillet Lasagna vs. normal Oven Lasagna was an issue to our Aaron……and therefore to me, the cook.  Such a minor thing, except to Aaron.
Don’t mess with Aaron’s normal!  Especially not his normal TRUE lasagna!
Another lesson learned in life with Aaron.