Aaron went to see Godzilla with his day group on Friday.  He loved it, of course.  It’s a typical big monster disaster movie full of excitement and fighting and suspense and noise and water and fire and bombs……perfect for Aaron!  So perfect, in fact, that since he saw it on Friday he has wanted to see it again……with me. 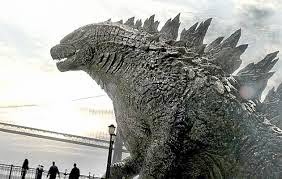 That is why I made the decision to let Aaron stay home today for a fun day with Mom.  The most fun part for Aaron, of course, is that we went to see Godzilla.  I was happy to do this as I also like disaster movies, up to a point.  I was game.  Plus I knew that school was still in session today, so hopefully when we went to see Godzilla it wouldn’t be very crowded.  That’s in case Aaron yells or laughs or claps or any number of other very annoying crowded theater behaviors he might exhibit.  I have experience.  Too much experience.
When I told him on Monday that he could stay home on Wednesday and that we would go see Godzilla, he was very happy.  And I was in no way surprised when he asked me what time the movie started.  I told him that it started at 12:30, and then as if on cue he asked, “So what time are we leaving?”
“We’ll leave a little before 12:00,” I told him.
“So what time will that be?” he asked.
I told him I wasn’t exactly sure.   I was trying to stretch him beyond his normal I-have-to-know-an-exact-time way of thinking.  It didn’t work.
I was the one being stretched as Aaron repeatedly asked me what time we would leave.  An EXACT time, Mom!  Don’t you know anything?
OK, Aaron.  We’ll leave at 5 till 12:00.  He was satisfied.
Then I heard, “So we’re leaving at 5 till 12:00?” an untold number of times.  Seriously.
And this morning, first thing, it was, “Mom, you said we’re leaving at 5 till 12:00.”  He said this as a matter-of-fact statement, but I knew he was also checking to see if the time was the same……..because sometimes he knows that Mom changes her mind.  So it was a question as well as a statement.
I told him yes, that we would leave at 5 till 12:00.  But just to be sure, he later walked into the kitchen and promptly asked, “We’re leaving at 5 till 12:00?”  I told him yes, and then he continued, “I need to take my glasses and my watch to the theater.”
“Why do you need to take your watch?” I asked.
“To see when the movie starts,” he answered.  “If I don’t have my watch I get impatient.”
This makes perfect sense to Aaron.
During the morning, he checked in with me several more times.  “We’re leaving at 5 till 12:00?”  I told him yes, but then I had to muddy the water a little by telling him that we might leave a little earlier than that in order to go by Wal-Mart to check on a DVD he wanted.
Sure enough, it was about 11:40 when I asked him if he was ready to go.  “It’s not 5 till 12:00,” he flatly responded.
Of course.
But I reminded him about the DVD search at Wal-Mart, so he was agreeable to that plan and off we went, with his glasses on and his watch pushed halfway up his arm in typical fashion.
Soon we were at the theater, tickets purchased as well as a large buttered popcorn and our free water…….and Aaron a little uncertain about sharing his large buttered popcorn with Mom.  The theater was very uncrowded so I was very happy.  Aaron sat down and then put his popcorn on the floor beside him…….away from me.  I didn’t say a word because I knew what he was doing.  He was waiting for the trailers of upcoming movies to finish.  He will not eat popcorn during the trailers.  Then came all the other preliminary stuff about the surround sound, etc……….and still the popcorn sat on the floor.
You do not eat popcorn until the movie starts, silly people.  Popcorn is for the movie……NOT for movie trailers and advertisements and whatever else is on before the movie starts.  He put a napkin on his lap just right…….and some on the empty seat beside him……and still more napkins in his pocket.  Aaron would glance down at the bucket of large buttered popcorn as if to see if it was still where he placed it, but not one kernel went into his mouth until the movie actually began to play.  Then he bent over and retrieved his large buttered popcorn, and grudgingly shared it with me.  We were off and running.
The movie was as I predicted…….loud, exciting, overly dramatic, unbelievable, and just a great old disaster movie.  Aaron’s favorite!  He did very well throughout.  I only had to hush him maybe 10 times.  Very good! 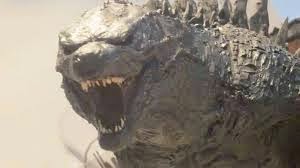 As we left the theater, Aaron pointed to the bathrooms, where he hurried in while I waited for him.  He didn’t use the bathroom, but had to wash his hands……because he had buttered popcorn grease on them, even though he wiped them and his mouth off repeatedly with the huge pile of napkins that he had strategically placed around him.  Doesn’t matter.  He will wash his hands after a movie, do or die.
We discussed Godzilla all the way to the car, and then all the way to CD Tradepost, where I took him to look for the DVD that is on his radar now.  At least we won’t be talking about 5 till 12:00 anymore, I thought.
The DVD wasn’t in stock, so I went ahead and ordered it from a store across town.  They will ship it straight to our house.  Aaron listened to me give our address, and then asked the clerk, “So when will it be delivered?”  She told him in two or three days.
“So what day is that?” he asked me as I stood there paying for it.  I told him it might be Friday or Saturday…….MIGHT!
Here we go, I thought.  We just finished with the 5 till 12:00 business and he’s already on another countdown.
We got in the van and as I backed up he asked, “So it’ll be here in two days?  Or three days?”
Sigh.
“Will it be Friday, or Saturday?”
Oh brother.
One thing I do know……it won’t come soon enough!