Skip to content
I took a little detour after dropping Aaron off this morning to drive around our neighborhood circle.  Actually, I had a purpose.  I was looking for our grill cover.  We had terrible winds yesterday and last night, strong even by Kansas standards.  The winds must have whipped our grill cover right off and blown it who-knows-where, because it’s gone.  It’s heavy and large, but it wasn’t too heavy for those strong winds.  I never did see it this morning.  Maybe it blew in the lake.  Who knows?
All of this reminded me of a funny story that happened when we were stationed at Fort Huachuca, Arizona.  We lived in military quarters on post, in a really beautiful setting.  We were surrounded by the Huachuca Mountains and had a stunning view from our large back yard.  We loved sitting on our little patio and soaking in the view, with gorgeous sunsets and brilliant storms.

We bought a trampoline and put it in our fenced back yard.  The kids spent countless hours out there with each other and with friends, jumping to their heart’s content.  They even talked Gary and me into jumping on it.  And none of us will ever forget the night we all camped out on the trampoline.  OK, OK……..they all slept on it.  I waited until everyone was fast asleep and snuck back in the house to our comfy bed! 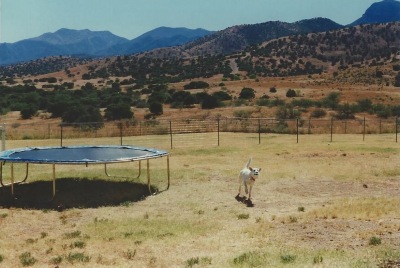