Skip to content
This past Friday was Aaron’s birthday – his number 29, to be exact.  That seems so strange to me, thinking that next year he’ll be 30 years old!  He loves his birthday, and weeks before the big day he’s already planning it.  Well, planning where to eat, most of all………..and then talking about gift ideas.  For a long time he wanted to go to Cracker Barrel for dinner, which would be the third year in a row.  But one day a few weeks ago he said, “Mom, I decided I want to go to that Mexican restaurant.”  I asked him which one and he answered, “You know, the one with those Mexican dancers.”  Mexican dancers?  I was trying to remember where on earth we had been that he had seen Mexican dancers……..and how I could have missed the Mexican dancers………when it hit me.
“Aaron, do you mean Texas Roadhouse?”  I asked him.  “Yeah,” he replied.  “You remember those Mexican dancers there?”  I proceeded to explain the difference in Mexican and cowboy, wondering where he got the Mexican theme from other than an old cowboy movie filmed near Mexico.  Anyway, we got that figured out and so Texas Roadhouse it was.
Of course, Aaron wanted Rosie and her mom and dad to come.  And he invited staff from Paradigm, so Misty got to be there as well.  He’s so funny, planning and talking and looking forward to his special day so much.  But when the day is finally here, he really doesn’t seem all that excited.  He gives a little embarrassed chuckle at all the “Happy Birthday, Aaron!” greetings, or a quick smile as he ducks his head and walks away.  He tolerates the annual birthday picture with our traditional birthday banner.  It’s like he wants to check things off his “My Birthday Is Finally Here” list……and then just get on with normal life.  When he walked in the door after getting home from Paradigm, he saw the wrapped gifts and the cards laying on the table, but he didn’t even act like he noticed them. 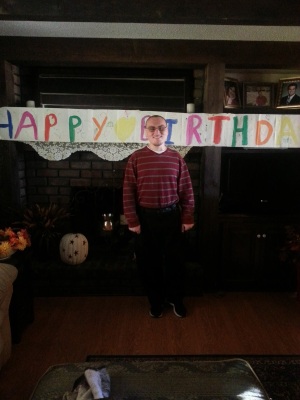 He talked for a few minutes about his day, and then told me to come and get him when it was time to leave for Texas Roadhouse.  Soon he was on his computer, unwinding and returning to his world for a few minutes.  He got off happily when it was time to go, the thoughts of restaurant food making him willing to leave his game.  It was a nice evening full of juggling conversation and food with him and with Rosie, and us adults fitting in some words whenever we could.  I loved watching him and Rosie sitting beside each other, across from me, and enjoying their friendship……..done their way. 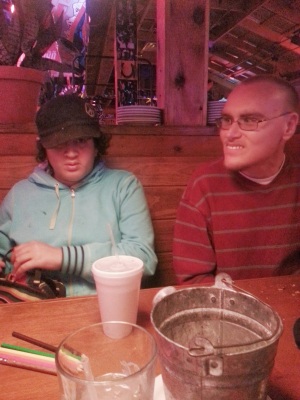 I was reminded of what Aaron said to me a few days earlier about a conversation he had with one of his staff.  “I asked Andrew why Rosie likes me.  He said she doesn’t talk to many people but she likes to talk to me.”  I told him that was very nice and so he continued, “But that makes me embarrassed……….like………married?”  He thought for a minute and then finished by saying, “I’m not a person to marry.”
Dear Aaron, always worried about this marriage thing.   I assured him that being special friends doesn’t mean marriage, and now as he sat beside Rosie during his birthday dinner I was just happy to see them being who they are.  This means that they didn’t talk much to each other at all.  Aaron was busy stuffing as many rolls in his mouth as he could muster after being sure I had spread the PLAIN butter on them from edge to edge, and being sure I scraped ALL the ranch dressing out of the little container for his salad, and eating peanuts during each free moment, and talking as much as he possibly could.  Rosie was coloring some with her nice colored pencils that she loves, and holding the pencils when not coloring, and reminding first Misty and then her Mom to tell about this and tell about that. 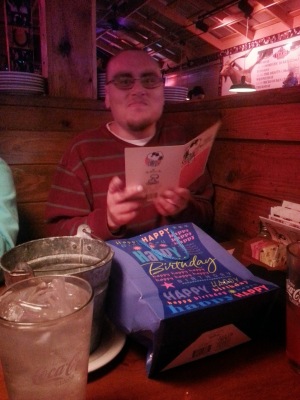 Rosie was excited to give Aaron his gift, and typical Aaron didn’t act near as excited to receive it.  He opened the gifts from Rosie and from Misty, and he sort of said thanks, but he had rolls to eat and chicken critters to chew on……..and opening gifts, while fun, means he has to do that embarrassing thank you, after all.  Deep down he’s pleased with gifts, but he wants to keep those emotions deep down and not put them out there for all to see. 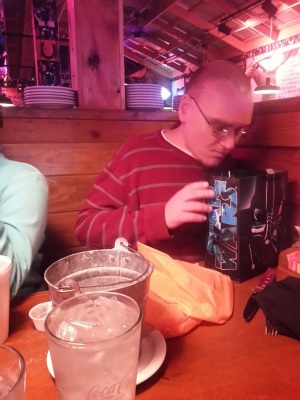 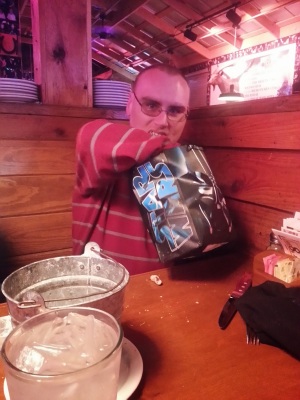 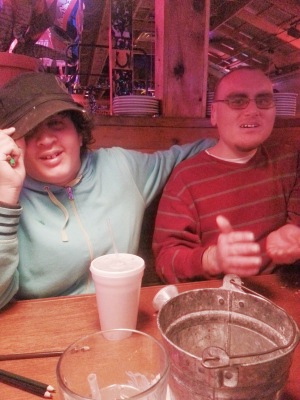 I loved it when I told Rosie and Aaron that I wanted to take their picture together, and immediately Rosie put her arm around Aaron.  She did that last year, too.  It’s just so genuine and real……..and is something Aaron would not do.  Soon it was time to go, and Aaron barely said goodbye or thanks to anyone.  He was off to his next assignment that needed to be checked off his list………opening presents at home.  He got through that in good order, moving from one to the other with little emotion but definitely taking it all in.   Gary and I laughed at the funny cards, but we had to make Aaron stop to fully read them and to notice how comical they were.  He was moving from point A to point B to point C……….enjoying the cards and the gifts but definitely nearing overload.  We made sure he reopened Rosie’s and Misty’s gifts and cards so he could realize what they were all about.  Soon, though, he was off to his room.  No time or desire to sit there and linger over some nice conversation with Mom and Dad, and too full for any of the apple pie I had made him.
He got into his pajamas as quickly as he could, and immersed himself in his game before thumping downstairs a few times to talk awhile.  His weekend was nice as well, with a little shopping, a little pizza, a little apple pie, a little time with Mom and Dad and Jackson, and just life as Aaron likes it.
I went in his room on Saturday night to say it was time for bed and time for me to take his keyboard.  He was just finishing up his new movie that he got for his birthday…….Pacific Rim.  A few minutes later I stuck my head back in his room and was not at all surprised to see him completely absorbed in watching the credits.  I’ve told about how he watches movies from the very beginning to the very end.  The very, very end with the picture of the lion and the minuscule print. 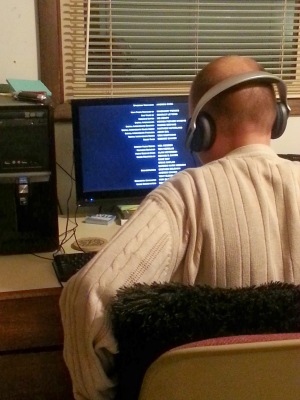 This is another part of life as Aaron likes it, so I just smiled and walked away until the movie…….in Aaron’s opinion…….was totally over.  Nothing new here.
Well, this morning there was something new.  Aaron has been getting up early in the mornings, but today he slept until a little after 8:00.  As we were getting ready to leave later to meet his group, Aaron said, “Mom, today I got up at 8:06………which was new!”
That, to Aaron, is indeed something new under the sun and worth noting.
And that, to me, is something to be expected and worthy of a smile.

One thought on “Another Birthday…..Something Old and Something New”