Skip to content
Gary and I just returned from a wonderful trip to Texas.  We spent the weekend at the AAA Texas Nationals NHRA race at the Texas Motorplex…..where I went from being “Miss woman who likes to watch Andrew on TV” to being “Miss woman who likes to watch Andrew in person.”  Aaron hasn’t thought to say that yet, but it’s probably just a matter of time before that comes out of his mouth in some form or fashion.  We also finished the weekend perfectly by getting to have dinner with Andrea and Pete. 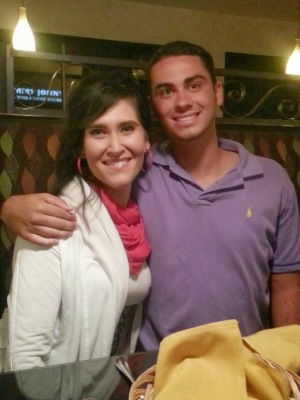 Zach, whom we’ve known for years, came over to spend the weekend with Aaron.  Aaron has, of course, talked and talked and talked about the weekend and all the fun they had.  They went to Chipotle’s, which was new to Aaron…….and which he keeps calling by names like Alfredo’s and other Italian sounding names.  He described what they ate and what it had in it and the soft shells and how it tasted……and that’s just one place that they went, and one thing that they ate.  He has expounded on everything they ate and everywhere they went, trust me.  He will continue to do so until every topic is thoroughly exhausted……….and Gary and I will be, as well.  Of course, Aaron doesn’t care about that.  I am sure that his favorite Bible verse, if he knew of it, would be, “He who has an ear, let him hear….”   And to think, we have two.
Aaron was very happy that he and Zach took Jackson on some walks around our circle.  I don’t often let Aaron hold the leash.  I just don’t think about it a lot, but Aaron was very thrilled that Zach let him hold the leash.  “Mom!” he exclaimed.  “Zach let me hold the leash!!  How come he’s more trustable than you?”
Zach also took Aaron to the Renaissance Festival on Saturday.  He texted me some pictures of him and Aaron and some friends.  Aaron laughed when I showed him the pictures, and then launched off into how weird things were at this “festibal,” as Aaron calls it.  We’ve discussed castles, bows and arrows, spears, spears of fire, kings, queens, knights………..you name it.  “Mom?” he asked.  “Can women be knights?”  I told him that I didn’t think so.  “Well, would you want to dress up as a lady knight?”
No, Aaron, I would not want to be a lady knight.  “Oh yeah,” he replied.  “I bet you’d like to be a queen.”   Absolutely, Aaron!

As Aaron crammed salad and pizza down for supper on Monday, he said to Gary and me, “I noticed that Zach talks like, ‘Cool dude.’  Why does he talk like that?”  So we told Aaron that guys that are Zach’s age just talk like that.  I know.  We’re so profound.
Aaron thought for a minute and then continued, “Zach said, ‘That’s cool, bro.’  What’s bro?”  Gary told Aaron that bro is another word for brother.  And of course, literal Aaron in his flat voice responded, “I’m not his brother.”
We know you’re not his brother, Aaron, but that’s just the way guys talk.
But to Aaron, this makes no sense.  You should only call someone bro if they are truly your brother.  After another moment of thinking, Aaron said, “On Sunday, Zach said ‘You can watch whatever you want on TV, bro.’ ”
There was a short pause and Aaron informed us, “I’m not bro.”
Gary and I laughed at Aaron’s rigid predictability as he sat there trying to figure out this bro business.  I will always be amazed at how Aaron notices everything……..absolutely everything.
Like this morning.  Aaron had been outside in the mulch as I finished getting ready to take him to meet his group.  I heard the door slam shut as he came in the house.  Perfect timing, I thought, as I hooked up his computer keyboard.  He yelled, “Mom!  I have something to show you!”  He came up the stairs and in to his room just as I turned around………..and saw him right behind me, holding up a little baggie.
And inside the little baggie was a little mouse………a live MOUSE!!!!  Oh my word!!  Aaron knew that last week I had seen a mouse in the garage, and so he thought that this was the mouse……..but the mouse I saw had already been caught in our mouse trap, which he didn’t know, and that mouse was history.  This new mouse was just a tiny baby.  Aaron said he found him just outside the garage door, so he used a stick to put him in the baggie.  Aaron was quite proud of himself for finding the mouse.  He held up the baggie and I could see the little fellow crawling around inside the bag.  Gulp!

I let Aaron walk out in the back yard away from the house and let the mouse go.  Aaron watched to see if he was moving and when he was satisfied that he was OK, he walked happily back to the house.  He washed his hands and off we went to meet his group, and to talk about mice and anything else that came into Aaron’s mind. 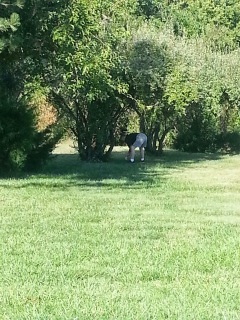 Aaron, whom as you know is very blunt, has said several times that he wished Gary and I had not come home and that Zach was still here.  This doesn’t hurt my feelings.  In fact, I’m very glad that Aaron had so much fun with Zach and that Aaron adjusts well to being with someone else other than us.
I also wish that Zach had been here this morning so he could have handled the mouse deal.  Why did that have to happen on my watch?!
It’s good to be home, though……….mouse and all!