Skip to content
It was almost two years ago that I first wrote about Aaron and his special friend, Rosie.  Since then I have written several more times about their very special friendship.  Aaron and Rosie continue to have a sweet relationship……one that we can’t quite define but one that is unique to them.  Aaron is kind to Rosie, at least as far as we know.  He still likes to take Rosie things,  and to share food or money with her.  We’ve been working with him to come up with other ideas of items to take to Rosie….things like pictures from the movie Cars that we print from the computer, or baby carrots instead of chips, or apples instead of Nutty Bars.  Just the other day, after cleaning out a drawer in what used to be our home school room, I found three crayons.  Aaron was very happy to take those three crayons to Rosie the next day…….because Rosie loves crayons.  And Aaron has already taken her every crayon that we own…..or so we thought.  I think these last three should be it!

We’ve met Rosie’s parents and we’ve talked some about their friendship.  We’re all very delighted for them to have each other.  We don’t want to discourage them in any way, but I believe I can safely say that we just want them to remain as special friends.  Aaron, though, has been observing some things and connecting some dots.  Some days I feel like the ice we’re stepping on may be getting a little thin.
Some of his comments are funny…..like the night we went to watch the Fourth of July fireworks.  The next day, Aaron said, “Mom, I saw a boyfriend and a girlfriend last night.”  I asked him how he knew that they were boyfriend and girlfriend, and he replied, “Well, they were acting strange.”  He couldn’t describe to me what he meant by that statement, and I was trying like everything to remember who was sitting near us and how they were acting……..but all I could come up with was a cute couple who sat near us and who were sweetly snuggling some.  To Aaron that was strange?  Maybe that’s really a good thing for him to think that way, right?
One evening as he and I walked around our circle,  Aaron once again mentioned Rosie.  He seemed burdened as he mentioned her and then again as he said something about whether or not he was her boyfriend.  I asked him if he wanted to be her boyfriend and he answered, “Well……kind of.  But then I have to think about marriage and that’s hard.”
I nearly stopped dead in my tracks as my mind was swirling, trying to think of what to say to him that would neither condemn nor condone this new word he was saying…….GULP!!……..marriage!!   He continued.  “Was it hard for you and Dad to think about marriage?”  I mean, how do you answer that question to this boy/man who is trying to figure out all this relationship stuff?   I stumbled through something about how it’s hard to know that you should marry this person, and is this person the right one, and that being friends is great,  and I don’t know what else I said………and Aaron asked what I meant………and I just said it’s very hard to explain.  So, yes, it’s very hard to think about marriage.  When we got home, I much-more-calmly-than-I-felt sat down and talked to Gary about it.  He just shook his head and looked as helpless as I felt.
Aaron doesn’t even understand what marriage really means.  He just knows that when two people, like Mom and Dad, became good friends………and then even better friends………and then very good friends……that they got married.  Connect the dots……one, two, three, four…..
Today Aaron was giving me his usual run-down of his day…..where they went and what he ate and what he did.  He told me that Rosie was sitting beside him in the van.  Aaron’s voice got very soft as he said, “Mom, do you know what Rosie did?”  Then Aaron leaned down toward me as I sat in my computer chair.  He reached for my hand and I nearly flinched, because Aaron loves to take our hands and roughly squeeze them.  But I didn’t move as Aaron very gently took my hand and held it.  “Rosie did this,” he said as he continued to sweetly hold my hand…….like a couple would do.  Oh my.  It was a tender moment, but I knew that it was really a tender moment between Aaron and Rosie, just being demonstrated to good old Mom.
“Did you like that, Aaron?” I softly asked him.   “Yeah,” he softly answered.  And that was it.  He soon lumbered upstairs to change clothes and start his evening.  I sat still for a minute, transfixed over that moment……how sweet it was, how tender……..and how much it says about Rosie and Aaron.  Holding hands was not lost on Aaron.  It meant something to him, deeply……not physically but even deeper, in his heart.  We don’t want to dismiss that for Aaron.  I don’t think we could if we tried.  We love this joy that he and Rosie seem to have together – this special bond that they share. 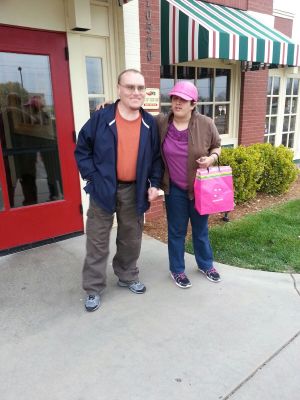 I have a feeling, though, that when Andrea or Andrew get married someday……….we’re gonna have a whole lot of questions to answer from Aaron as he connects even more dots.  I never dreamed this would ever be a concern for us with Aaron, but here we are……….maybe.
I still think God sent an instruction manual with Aaron, surely.  I just wish I hadn’t misplaced it.

2 thoughts on “What Rosie Did”