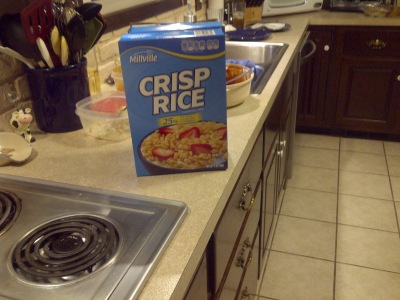 Still not wanting to totally commit, I told Aaron that MAYBE I’d make them after supper.  As we ate, he continued to pursue his request for this favorite snack, and finally said, “Mom, can I help you make them?  Like when I helped you make chocolate puddin’?   It’ll go by faster!”   First of all, Aaron really does say “puddin’ “………..just in case you were wondering.  It’s some carry-over from childhood and the Pokey Little Puppy book, I think.  And as far as his assurance that his help would make the fixing of Rice Krispie treats go by faster……….well, that’s highly unlikely.  I sat there remembering all the times that Aaron has “helped” me cook, and how he detests getting his hands messy – which results in many exclamations of disgust and much wiping of his hands on paper towels or washing at the sink.  I was also envisioning his exaggerated stirring, with the contents of various bowls ending up all over the counter or stove……….or how uncoordinated he is with certain utensils, especially knives!………..or how he still hasn’t mastered cracking a raw egg – “No, Aaron!  You pull the cracked egg apart!  You don’t mash in!!!”
Then remembering that Rice Krispie treats have no eggs, I began to reconsider.  Still, the sticky and messy hands, and the stirring…………oh, why not?  I was feeling generous, and Aaron was so eager, that I said yes and made him very happy.  He waited as patiently as Aaron can wait while Gary and I cleaned up the kitchen.  Finally it was time for Aaron to take center stage and help Mom with the Rice Krispie treats.  He got the butter out of the frig, and actually cut the required amount safely as I fearfully watched.  Just as I knew he would, he did NOT want to get the butter on his fingers as he dumped it from the wrapper into the pan on the stove.  After wiping his fingers clean, he watched the butter melt.  “Mom, why is it moving?  Look at it moving!!  Why is it moving?”
After the fascinating, moving butter had melted I had him dump the marshmallows into the pan and start stirring.  “Oooh, Mom!  It looks like barf!”   Stir, stir, stir…………and then when I looked away I heard a noise, only to turn and find him using the spoon more like a hammer as he plunged it repeatedly into the melting marshmallows.  “Aaron, what are you doing?” I asked.  He answered, “I’m trying to smash those squares!”  Squares?  I looked in the pan and saw what he meant.  Where the melting marshmallows were joining together, some of them did look like squares.  Only Aaron!
“Is it time to pour the Rice Krispie treats?”  he wondered as he saw me measuring the cereal into a bowl.  “Just hang on, Aaron.  You have to stir the cereal in first,” I told him.  He then stirred and stirred until the mixture was pretty well evenly mixed and he eagerly watched as I dumped it into the greased dish.  I turned to do something else and when I looked back at Aaron, there he stood…………holding the pan of Rice Krispie treats as he said, “Mom, I’ll put them in the oven for you!”  No, no Aaron!  We don’t bake Rice Krispie Treats.  They’re done!  And off Aaron went to his room, saying that he would eat one later.  We had survived the entire process without a major issue or disaster! 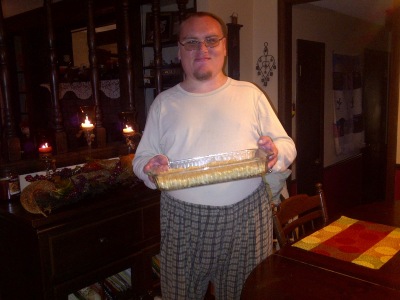 Later that night, Aaron finally ate one before bed.  Then later, after the lights were out and we were in bed, I heard a noise.  Aaron had already gone down to take his pills, so I wondered what he was doing.  When I got up the next morning, I looked at the Rice Krispie treats and saw that  a large section was missing.  I should have known!  Aaron had gone on a mission last night and filled his stomach with his favorite snack!
This morning I had a dentist appointment, so I left just a few minutes before Cody picked Aaron up at home.  I returned to the house later, ate my lunch, and then decided that a Rice Krispie treat would be just the perfect little end to my lunch.  That’s when I noticed that the lid to the Rice Krispie dish was askew.  Hmmmm………..and as I looked, my fears were confirmed.  Sure enough, the dish was empty.  The treats were totally gone!  Oh my goodness! 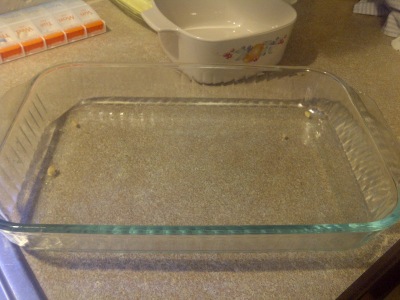 That rat!  Aaron took……….or ate………..all the Rice Krispie treats after I left this morning!  Maybe he took some to Rosie.  Now I REALLY wanted what was no longer there.  Let’s see – I knew I had the Rice Krispies.  I checked the cabinet for another stray bag of marshmallows, too, just in case there was one hidden behind the pasta………or the peanut butter………..or the cake mix………maybe behind the oatmeal?  No?
Next time, I’ll make Rice Krispie treats without Aaron’s help……..when he’s not even home……….and I’ll eat ALL I want before he even knows I made them.
See how he brings out the best in me?