I got the best surprise for Mother’s Day.  We had been helping at a friend’s 50th wedding anniversary party, working in the kitchen.  Well, Gary was fishing but Andrea came in from McPherson and came out to the party, where she worked and worked with us in the kitchen.  My sweet, beautiful daughter didn’t mind a bit to be washing dishes and doing whatever else needed doing for several hours.  What a blessing!  Then later, when we pulled into our driveway, there was Andrew’s truck!  That was my big surprise that everyone knew about except me.  We hadn’t seen him for several months, so it was wonderful to give him a big hug and cry on his shoulder.  To top it off, there were beautiful pink roses and funny cards…………and Andrea even made sure that Aaron signed a card. 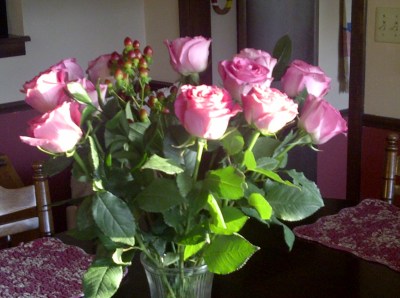 We talked until late that night, catching up, and then they wanted me to decide about what to do the next day.  I chose to grill steaks……..well, Gary would do the grilling and then Andrea and I would do the rest.  After church, Gary and I went to Sam’s for the steaks and other groceries.  On the way home, my cell phone rang and I saw that it was our home number, which means one thing……….Aaron.  So I answered my phone – “Hi, Aaron.”

“Mom, when are you coming home?”  I told him that we were on our way.  I knew exactly what his next comment would be………..and it wouldn’t be to wish me a Happy Mother’s Day.  I actually knew that it would be a question and sure enough, he asked, “So, what are we eating?”

I told him that we were having steaks with Potato Casserole, Bean Salad, Tossed Salad, Ciabatta Bread, and Strawberry Shortcake.  He seemed fairly unimpressed, but I knew he was happy about this menu because I know Aaron.  I also knew his next comment/question and of course, he delivered:  “Mom, when are we eating?”

I answered that question and there was a very brief pause.  Would he just maybe say something about Mother’s Day?

“Mom, I was watching the Science channel.  Do you believe there was such a thing as cavemen?”

Cavemen.  That doesn’t even remotely have anything to do with Mother’s Day……at least that I’m aware of………maybe a little to do with eating steak……….

Oh, Aaron.  I really wasn’t too surprised at this random turn in the conversation, but it did make me chuckle.  And as I talked to Aaron about my belief or unbelief in cavemen, Gary was smiling, too.

“Mom, the cavemen lived in caves and wrote on the walls, and they wore fur animal skins.”

Well, Aaron, I believe that people lived in caves and did all those things, yes.

“And they killed a deer.  It was an elk, and they used the antlers for things!”

Aaron, let’s talk when I get home.

But he would not hang up because he had more to say about the cavemen.  Oh dear.  Finally, I just had to tell him that I was hanging up and would see him soon………….knowing full well what the majority of the rest of the day would entail.  Cavemen facts……..cavemen stories………cavemen ideas………….cavemen theories………..cavemen anything and everything. 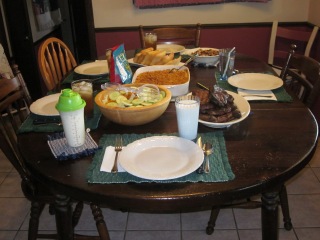 The caveman chatter did come to an end, though.  That’s because as he finished cutting some coupons, he watched another program on the Science Channel.  Steven Hawking was interviewed and Aaron was intrigued by him.  Therefore, the evening was all about Steven Hawking……….his brilliance, his sad beliefs about God, his computer, the disease he has.  Steven Hawking was the last thing Aaron was talking about last night, and was what he talked about this morning.  I have seen pictures of Steven Hawking and watched a video of Steven Hawking.  Anyway, you know the routine by now.

I guess cavemen have gone the way of the dinosaur……….at least for now.  And as I said good night to Aaron  last night, I thanked him for helping to give me a happy Mother’s Day.  He just gave a little grunt.  Then I said, “After all, Aaron, you helped to make me a mother.”

He gave a laugh at my funny little joke.  I didn’t tell him, but he’s helped to make me a very interesting and random mother.  A day full of cavemen and Hawking………..I can never predict the way a day with Aaron will go.