Aaron loves nuts………….the kind he eats, not the ones he lives with.  Anyway, not only does he enjoy eating nuts, but he’s fascinated with all the variety of nuts there are.  He thinks it’s neat that we have two pecan trees…………….pee-con, as he calls them. 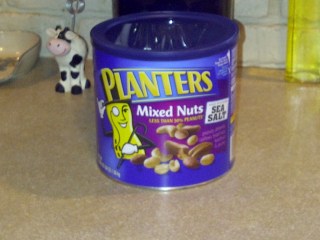 I bought a large can of mixed nuts last week at Sam’s, hoping that they would last a long time.  That usually means I need to hide them from Aaron, but he’s pretty much like a squirrel in being able to find the hidden nuts.  And then he hides his stash that he pours in his favorite snack bowl………..usually under his bed.  I really need to clean under there some day.  No telling what I’ll find.

Not much escapes Aaron’s observations, and the mixed nuts certainly do intrigue him.  Aaron doesn’t just pop them in his mouth and happily eat.  He has examined the unique characteristics of each variety of nut, and loves to share what he has noticed.

He thinks pee-cons that we buy in the store and that are part of the mixed nuts are very interesting.  “Mom!  I like that nut.”

Which nut is that, Aaron? 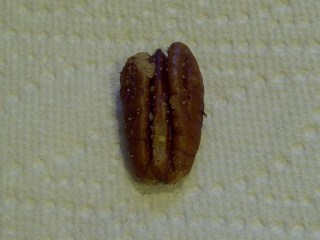 “I don’t know the name, but it’s the one that’s wrinkled.”

He was surprised the first time that I told him the wrinkled nuts were pee-cons, like the ones that grow on our tree and that the squirrels steal and hide.  But to Aaron they are the wrinkled nuts.

The fat nut is a cashew, but fat nut is much easier to remember…………and perhaps relate to? 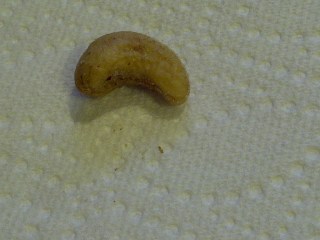 On Saturday, in a moment of conviction, he handed me the bowl of nuts that had been hidden under his bed.  He excitedly said, “Mom!  I noticed something!  Some of those nuts have wrappings.”

Wrappings.  Who would have thought to call the skin a wrapping?  Only Aaron! 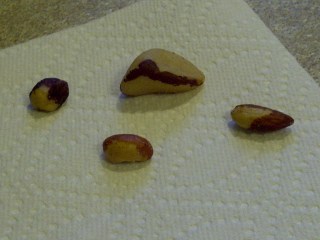 I have no idea why Aaron was asking me now about whether he should take the wrapping off when he’s eaten how many thousand wrapped nuts.  But I assured him that it was fine for him to eat the wrapping……..or the skin, if you’re boring…………and he was very relieved.

Unwrapping all those nuts could take awhile!  Hmmm…….maybe I should have told him that he needed to unwrap them.  He might eat a lot less!

One thought on “Mixed-Up Nuts”