After asking and asking for many nights in a row, Aaron and I finally got to play a game of Skip-Bo tonight.  He had already asked the familiar question several times since he got home from his group.  “Mom, can we do something tonight?  Maybe play Skip-Bo or do our backs?”  So when I went up to his room and asked him if he wanted to play a game of Skip-Bo, he gave a very enthusiastic “Yeah!!”

I went on down to the kitchen table to move everything out of the way and shuffle the cards.  Soon I heard Aaron’s heavy thump, thump, thump down the stairs.  There he came, carrying his ever-present clock and his hand towel that he takes everywhere.  The towel is for him to wipe his hands on when he eats a snack.  Napkins are for meals and the towel is for snacks.  He detests getting his hands messy with crumbs, salt, – or anything!  The towel is his lifesaver for keeping his fingers clean. 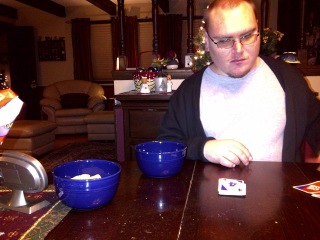 Soon he had chosen his snack – tortilla chips – one of his favorites.  You can see in the picture that he got out two bowls.  One bowl holds some chips.  The other bowl holds any crumbs that fall when he bites the chip.  No, crumbs cannot fall back into the chip bowl.  Such a thing is not allowed at all!   He takes a chip from the chip bowl, bites the chip while leaning over the crumb bowl, then gives the chip a few shakes into the crumb bowl, and repeats the process until the chip is eaten.  As soon as the chip is all in his mouth and his hand is empty, he reaches over to his towel and wipes his fingers clean.  Every single chip is eaten this way…………..bite the chip, shake the chip over the crumb bowl, bite the chip again, shake again, and wipe his fingers when the chip is gone.  Very methodical…………..very interesting……………very Aaron.  Tonight he said, “Mom, the people who made these chips didn’t do a very good job.”  When I asked why he thought that, he replied, “Because they’re bubbly!”  Yep, the chips had little air pockets that made more crumbs than usual when he bit them, so his crumb bowl was getting very crumbly as he shook and shook each chip.

Skip-Bo is Aaron’s favorite game and he never tires of playing.  He likes how sequential it is – orderly and sensible.  He rarely uses the strategies that the rules recommend, yet he often beats me.  I do have to watch him because he can at times be a sneaky cheat.  I know that’s not a character trait to admire, but I have to say that his ability to think of ways to cheat shows me once again that he really is smart.  Some days I’ll take it in whatever form it comes! 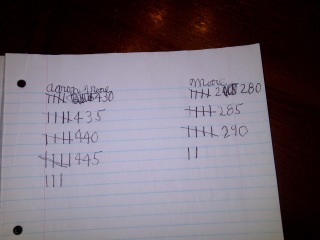 He likes to keep a record of our wins, as you can see in the picture.  I’m swallowing my pride and showing you that he is WAY ahead of his mother!  He usually puts Mom in the right column but for some reason on this sheet it says Moore………..but that’s me.  You can tell because I’m way behind.  Maybe I need to double check his counting.  He may be cheating at that, too!

Playing Skip-Bo is a good way for both of us to unwind at the end of the day.  It’s a great chance for Aaron to talk and for me to hear more about his day – or what he’s reading – or what he has eaten – or what movie he wants to see or to buy – or what the weather is or the temperature outside according to his faithful clock – or how annoyingly bubbly his tortilla chips are.