Aaron loves to eat Goldfish crackers.  The other night we were watching football and he went into the kitchen to get a snack.  Soon he came back into the family room with his blue bowl heaped full of Goldfish.  He was also carrying an empty bowl.  He got settled again in the big chair that he loves, stretched his legs out on the ottoman, covered his legs with his fuzzy blanket (nursing home style), and proceeded to get his bowls situated just right on his lap.  Things must be done correctly before the serious business of eating takes place!

I felt like I knew what the second, empty bowl was for but decided to ask anyway to see what he would say.  “Aaron, you have two bowls.  What’s the empty bowl for?”    And he replied, succinctly, “Crumbs.”  Now I know that Aaron does get a second bowl when he eats things like tortilla chips or cookies – food that is larger and may be crumbly.  He’ll lean over the empty bowl when he takes a bite and then give the chip or cookie a shake in order to get rid of the crumbs.  Crumbs must never go into the same bowl as the uneaten chips or cookies.  But Goldfish are very small and you don’t bite into them, creating crumbs.

I watched Aaron out of the corner of my eye as he ate the Goldfish.  Every now and then he would toss a Goldfish into the empty bowl.  He would toss it rather quickly, like it was almost hot or uncomfortable for him to hold.  And I knew what he was doing.  Here’s a picture that I took later, after he had gone to bed. 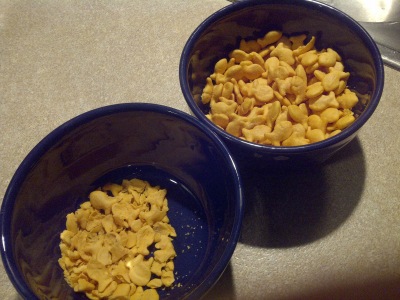 The Goldfish that Aaron won’t eat and must dispose of are those that are defective.  They have part of the cracker area missing, or have a hole in them, etc.  He will NOT eat those Goldfish.  I’ve noticed this in the past.  He’s pretty secretive about it, as if he knows this behavior is strange and so he doesn’t want to talk about it.  In fact, as he tossed the unwanted Goldfish into the empty bowl that night he would glance at me to see if I was looking.   The workings of Aaron’s mind continue to fascinate us, no matter how long we live with him.

Deep thoughts also cross my mind, such as:    Why on earth will Aaron sometimes eat a paper towel (no joke!) but won’t eat a defective Goldfish cracker?  I’ll probably never figure that one out!