Aaron loves rolls – yeast rolls in particular – but nearly any kind of bread is a huge hit with him.  If we have rolls for a meal, we usually end up hiding them after we eat.  If we don’t, then Aaron will sneak into the kitchen to take the rolls a few at a time until they are all gone – usually by bedtime.  It’s so frustrating to go into the kitchen, ready to pop a roll into the microwave, only to find the empty plastic storage bag on the counter.  Aaron!!!

This morning Aaron asked if he could have some extra money since his group was going shopping, probably to Wal-Mart.  So instead of his usual 5 dollars, I gave him 7 – and some change.  But I warned him, “Aaron, do NOT go and buy a bunch of candy with that money.  You don’t need a huge bag of Skittles or several boxes of Mike and Ikes.”  Then I urged him to buy something good for lunch.  I said, “You know, Aaron, you could go to the deli and buy some real food for lunch.”  He agreed – but with Aaron I never know.

He bounded in the house this evening, holding a Wal-Mart bag that had something like a box in it.  He was very excited.  “Mom!!  You know what you said about not buying candy?  Well, I didn’t.  Instead, I bought this!!”  And out of the bag he pulled – this: 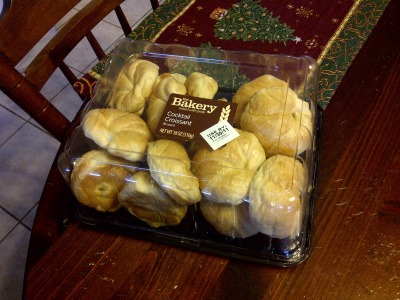 A box of rolls.  He was very pleased with himself.  Instead of buying 3 pounds of Skittles, he bought 18 rolls.  Well…………..I guess that’s O.K.   I was wondering what he had eaten for lunch since these were unopened.  He was a little evasive.  So I asked him how much the rolls cost and he told me they cost “3 dollars and something.”

We ate some of the rolls for supper tonight.  He kept an eagle eye on the plate that held the rolls and made sure that he grabbed the last one that was left.  Later, as we cleaned the kitchen, we noticed that the container of rolls was missing some.  He sure can snatch and run very quickly.

I’ve told him about other choices in the deli – a sandwich, some fruit, a salad – but leave it to Aaron to spy those rolls and forget anything that I said.  Ah, what freedom!  To have 36 rolls all his own – to eat, to share – but not to have them hidden from him.  He said the woman at the register asked him if he was having a party, and he told her no.  But to him it was a party – with 36 rolls!

We never know what a day will hold with Aaron!

One thought on “The Rolls”