Skip to content
Two weeks ago, Gary and I were finishing the last leg of our drive to West Virginia as we traveled home for my mother’s funeral.  Has it just been barely over two weeks ago that she breathed her last breath?  So much has been packed into this short time that it seems like she left us much longer ago.  That’s how my mother lived her life, though.  Like my brother said at her funeral, Mom squeezed every bit of opportunity out of each day that she lived.  So much was packed into her life…..so much that will impact so many for eternity.
As Bob and Jan, and John and Jeanie, planned Mom’s funeral, they incorporated two very sweet and personal elements into the service.  Jeanie asked each of the grandchildren to write down their memories of their grandmother.  At her funeral, Jimmy read every word that had been written.  It was a very moving and sometimes humorous part of the service.  Then Jan asked each of us to bring our quilts that Mom had made us.  Each hand stitched quilt that we brought was hung over the railings at the front of the church, adding a beautiful background as we remembered our mother.

Something really stood out to me as I listened to the grandchildren’s memories being read.  It’s the same thing that I noticed during her visitation at the funeral home the night before her funeral.  That night, we stood in line for nearly three hours as person after person hugged us and told us of what our mother had meant to them.  Most of their stories were fairly simple.  It wasn’t that Mom had done earth shattering acts of great note.  She wasn’t interviewed by the newspapers, seen on television, or given big awards for her acts of kindness.
So what did people talk to us about as they shared my mother’s impact on their lives?  It was her service to them, her love, expressed in so many ways.  It was meals she cooked, her home she opened to so many, stockings she knitted, clothes she sewed, miniature roses she delivered in Cracker Barrel syrup bottles, boiled custard that she cooked because a friend loved it, sending out missionary prayer letters, making dozens of quilts for others, and so much more.
It was her great sense of humor….her ability to lighten any situation with an attitude of light heartedness that was often amazing.  It was her word fitly spoken to so many, especially to those who had messed up and made poor decisions.  She comforted without judging, and extended help where others might have looked the other way.  Story after story we have heard since Mom died.  What a balm to our hurting hearts!
The grandchildren’s memories were more of the same, on a more personal level.  Again, what is striking is that no one mentioned my mother’s education or her job.  Not that this isn’t important, because it certainly was a great accomplishment for her to have a Master’s degree and to have a supervisory position with the State Board of Education.  Yet with all of her educational goals that she met and with her very responsible job, my mother maintained our home and our family in an incredible way.
It was, again, the seemingly small acts that all the grandchildren remembered the most.  Guess what was mentioned most often by her grandchildren?  It was the Cheerios that she kept in the coffee table drawer in the living room.  So many of them talked about that memory and of how much fun it was to go to their house, pull out that drawer as a little child, and eat as many Cheerios as they wanted.  Other memories were of the toys, the laughter, sitting on the front porch, all the play time in the yard, her cooking, gardening, sewing, and her unconditional love.  It was how she filled her home with joy and filled their lives with personal touches for each grandchild.
In her memories of her grandmother, Andrea wrote, “I remember how she patiently showed me how she pinned her fabric together in preparation to sew her gorgeous quilts by hand.”  As I sat in the church during mother’s funeral service, I looked at the quilts that we had hung on those railings.  Each one is full of hundreds of fabric pieces, placed together in way that makes a gorgeous design.  When you step back and look at the finished project, you see how each piece combines to make a perfectly beautiful work of art. 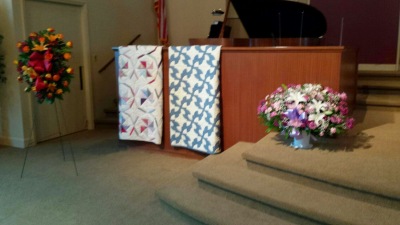 So it is with the life that Mom lived.  Each act of love that was remembered and many that have been forgotten, have all fit together to produce a beautiful life.  It’s the handiwork of God in our mother’s life that has blessed and profited so many of us over the 88 years that she lived.  Her life was a pattern that I want to follow.  A pattern of service and kindness that means more to people that any public acclaim ever will or could produce.
Like she so often sang:
I’d rather have Jesus than men’s applause.
I’d rather be faithful to His dear cause.
I’d rather have Jesus than world wide things
I’d rather be true to His holy name.
I’ll be learning lessons from the design of my mother’s life for the rest of mine, I’m sure. 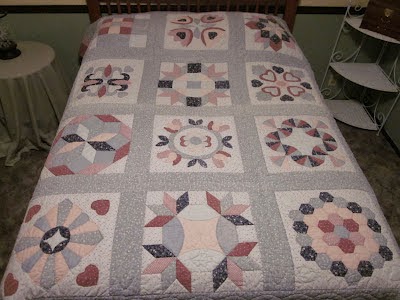 5 thoughts on “The Pieces of a Beautiful Life”