Skip to content
Aaron came home this past Friday full of talk about his day.  He had helped Bryan work on houses, he said, meaning that he had gone with Bryan to one of the residential houses that Paradigm manages.  He has really enjoyed helping with the repairs on the houses…..or putting together tables and chairs…..hanging curtain rods…..those sorts of things.  I’m not sure how much actual helping Aaron does, but he likes going and he likes telling us that he’s a “worker on houses.”
As Aaron talked on Friday about his day, he reached into his pocket and pulled out three packs of Big Red chewing gum……his favorite.  I guess this was his purchase of the day at Quik Trip, or somewhere, and he was very happy with it.  I knew what we were in store for over the upcoming weekend, too.  Loud chewing of several pieces of Big Red gum in Aaron’s mouth at once, and the smacking of his lips as he savored every taste of cinnamon, is what awaited us.  It doesn’t matter how many times I say, “Aaron, chew with your mouth closed.”  Or, “Aaron, don’t smack your lips like that when you chew.  Or, “Aaron!  You’re chewing like a horse!”  He’ll quieten down for a few minutes, but soon he’s back at it full force while I cringe.
I had supper going on Friday when Aaron once again walked into the kitchen, this time with an open pack of his Big Red gum.  Several pieces were missing.  I knew where they were because I could hear them in his wide open mouth as he chewed them.  Yuck!  He handed me the open pack of gum and said, “Here, Mom.  You can have some gum.”
Now Aaron knows that I’m not a big fan of chewing gum.  I just don’t enjoy chewing gum a lot, but I thanked him for the kind gift and told him I would chew some later, after supper.  I took the pack of gum that he held out and I placed it on the kitchen counter as I turned to do something else.  After several seconds, I heard Aaron leave the kitchen, and when I turned around, this is what I saw. 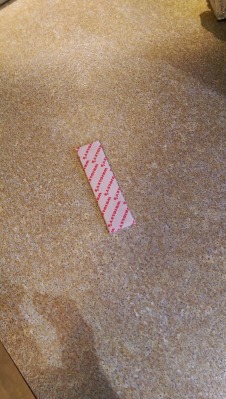 I had to laugh.  Aaron didn’t mean for me to take the WHOLE pack of gum.  He meant for me to have one PIECE of gum.  He must have been glad that I turned my back so that he could quietly take that one piece out, lay it where I would see it, and make his getaway.
Later that night, we were watching Jungle Book.  We laughed, and were enjoying the story and the fun songs.  I kept glancing over at Aaron, who sat in his favorite chair covered with his favorite blanket.  He seemed spellbound by the movie, not making a motion or a sound…..which is very atypical of Aaron.  We watched Mowgli with his friends….Bagheera, Baloo, Colonel Hathi with the other elephants, and even the vultures.  And I kept turning an eye on Aaron, watching him as he seemed so taken by this movie.
Finally I noticed that Aaron looked different.  I looked at him while he was still unaware of my stare, which he would not like.  Was he crying?  I watched a few more seconds, and soon Aaron took off his glasses and wiped his eyes.  Yes, Aaron was crying.
“Aaron, are you OK?” I casually asked.  He said he was, so I waited a few seconds.
“Are you crying?” I ventured to ask.
He paused before looking at me with a halfway smile and then surprising me by saying yes.  He was indeed crying.
I asked him why he was crying and he simply answered, “I miss Rosa.”
Then over the next few minutes, while Jungle Book continued to play on the television screen, he told me that he didn’t think he had friends…..that no one was a friend like Rosa……no one understood or liked him like Rosa…..that even some of his other friends at his day group were getting tired of him.
He tried for the remainder of the movie to talk a blue streak about anything and everything, as long as it had nothing to do with what he had just said.  He had shut the door on that topic, so we finished the movie with the spell broken.  Aaron was talking nervously about whatever came to his mind, and I knew not to bring up the friend subject again at that point.
And he put a couple pieces of Big Red gum in his mouth, chewing furiously as I kept up my usual reminders to him about his method of chewing.
Later that night, though, and several times over the course of the weekend, Gary and I had opportunity to discuss the subject of friendships with Aaron.  Poor guy.  He has so many disconnects in his autistic brain.  He just can’t control many of his actions, for one thing…..and then he has a hard if not impossible time figuring out that A leads to B which leads to C…..
For instance, his VERY loud clapping is extremely irritating.  When he claps a lot, or sometimes even once, it can make his friends downright angry.  It’s very hard for Aaron to control that clapping.  It’s like he just must clap sometimes.  But he also told us over the weekend that his clapping makes his friends mad, which makes Aaron sad.  He doesn’t always act sad, but he often is.  He showed his sadness during the movie on Friday night.  Aaron said he doesn’t have friends like Mowgli, and he wishes he did.
We gave him little instructional talks about how to make friends.  Do this, and don’t do so much of that.  Do speak kindly, for instance……and don’t hit people on their rear ends.  It seems so simple and easy to us, but it’s so very difficult to Aaron.
Aaron has many facets to him.   So often, those facets are hidden under his loudness or his toughness.  But every now and then, we get a glimpse into what he’s thinking and more importantly, into what he’s feeling.  It’s a rare event, bittersweet because of the sadness that sometimes accompanies that look into his heart.
It reminds me of his pack of Big Red gum on Friday.  I thought he was offering me the whole pack that was remaining, but no, he was offering me one piece.  When I wasn’t looking, he left that one piece on the counter for me to find when I turned around.  I was happy with that one piece, given with Aaron’s open heart, as much as if he had left me the whole pack.
That’s how we must live with Aaron every day as we deal with his special needs, especially in this case his autism.  At the most unexpected times, when he is ready, he might allow us to see into his mind and into his heart.  It’s usually in one little piece at a time, though.  He walks away with all the other parts that make up Aaron, maybe to be shared on another day or in the midst of another event.  He won’t sit down for an hour and share all of his thoughts and all of his inner feelings.  He WILL sit for an hour, or for several hours if we let him, and talk about aliens and movies and all sorts of other Aaron “stuff.”  But his inner workings are doled out piece by slow piece, over time.
We must be ready to seize those times, with Aaron’s permission…..almost as if he’s handing us that one piece of gum.  Piece by piece we come to understand Aaron.  And as Gary and I put those pieces together, it’s similar to having a pack of gum that’s filling up with all of our understanding of Aaron.