Aaron stayed home yesterday because he had three seizures during the night.  I let him sleep in so that he could recover.  He got out of bed, drank some coffee, and took his meds along with some pain reliever for his headache.  I needed to make a trip to Sam’s but I wouldn’t leave him at home by himself, so I asked him if he felt like going with me.  He jumped at that opportunity, seeing visions of a cart full of items that he wanted…..not paper towels and toilet paper and boring meat, for sure!  And the offer of eating lunch there was too good to pass up, so off we went, listening to music and listening to Aaron talk about everything he saw…..of course!
We had settled at our table at Sam’s with our pizza slices and glasses of water, when I decided to take a picture of Aaron.  He agreed to the picture only if I let him pose as a Star Wars clone.  He told me to send the picture out with the explicit description that he was making the face of a Star Wars Republic Commando clone…..the PC game, not the movie.  OK, got it, Aaron! 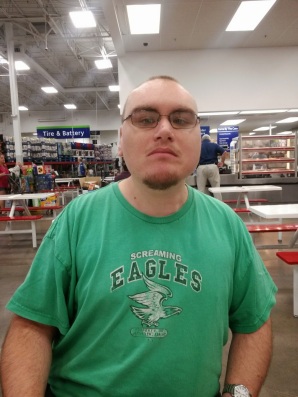 He then asked me if I was going to use the shopping cart that was big and flat…..because then he could ride on it like Barb and Brandy let him do when they take him to Sam’s.  I told him no, I was not using that flat cart, and he was disappointed.  He continued to ask me about this as we talked during lunch, pointing out how others were using the big flat cart.  But they weren’t pulling a big Aaron on their flat carts…..which didn’t matter to Aaron at all.  He didn’t think it would be at all unusual for him to be pulled on the big flat cart…..like Barb and Brandy do.
We finished our lunch and then walked toward the carts.  Aaron decided to try one more time to change Mom’s mind, asking me again if I would get the big flat cart for him to ride on.  Again I said no.  “Mom?” he asked.  “Can’t you be nice?”
So I reminded him that I had been nice to let him come with me.  I had been nice to get him pizza for lunch.  I was being very nice, I told him.
And he quickly responded, “Well, can’t you be nice a SECOND way?”
I laughed as I walked and Aaron lumbered beside me on our way to claim our cart…..our normal cart.  And in that normal cart we placed some items that made Aaron very happy…..and walking made him feel better.  He really didn’t need the big flat cart at all.
This morning, as I prayed, I thought about the comment that Aaron made.  Sometimes I question God’s direction in my life…..what He allows and what He takes away.  In my own way, I am Aaron.  I don’t always recognize how “nice” God is to me because my eyes and my thoughts are instead on the things that He is not giving me.  I want Him to, in a sense, pull me along on that big flat cart…..doing everything my way.
God, can’t You be nice to me a SECOND way?  I know You have done this for me and that for me, but I also want this other thing.  I think I NEED this other thing.  But God in His wisdom says no….and if I but look, I’ll see that His plan for me, a normal cart, can also be filled with many wonderful items and blessings that I might have missed had He given me that other cart……that SECOND way that I so wanted.
Help me, Lord, to stop asking You to be nice to me a SECOND way, and to be thankful and trusting for the way that You have chosen for me each day.