Skip to content
This past Thursday, Nov. 8, was Aaron’s birthday………number 28, amazingly enough!  When I went into his room to check on him and make sure he was up, I found him watching a video.  I said, “Aaron!  Today’s your birthday!”  And he replied, in his rather flat voice, “Yeah.”  But he had a smile and he rubbed his hands together, and I knew he was happy with the fact that today was finally THE day.  The countdown was over and he could now enjoy this special, once-a-year day that belonged only to him.
I returned to his room later to urge him to shower and get ready.  He was immersed in his video, watching…………the credits.  Yes, when Aaron watches a movie he watches every single part of it, from the very beginning to the bitter end.  This includes those credits that we usually pass up or watch briefly, at best.  Not Aaron!  He watches until the very last tiny word passes off the screen; and then when the black, blank screen appears, he is finished.  He held up his finger as I spoke to him, a sign that he is engrossed in what he is doing and that I needed to be quiet and wait my turn.  Rolling my eyes, I walked away.  His shower would have to wait until the important credits were finished. 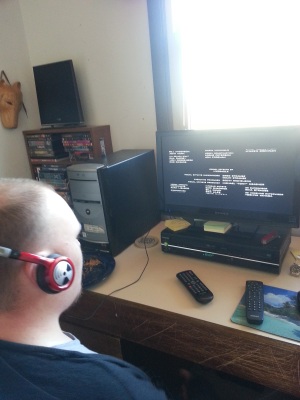 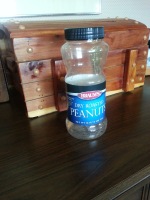 I also noticed that on his desk next to him was a dinner plate full of some sort of crumbs.  I soon learned that the “crumbs” were actually pieces of peanuts.  He reached down and picked up the jar of peanuts that Dan and Wendy had bought him the night before……….and it was empty.  Yep, he was starting his day off with a bang by eating an entire jar of peanuts! 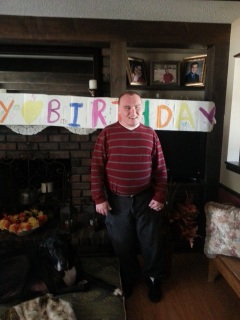 Finally, he was clean and ready to begin his wonderful day.  He let me take his picture under our old family Happy Birthday banner that we hang up on each birthday, even though having his picture taken is not his favorite thing to do.  He then followed me around the house, talking as usual about whatever popped into his ever active mind.  Such as:   “Mom, something last night was so much funny!  I was reading my Handy Answer Science book.  Have you ever seen a picture of Isaac Newton?”
Yes, Aaron, I’ve seen a picture of Isaac Newton.  With that, Aaron laughed and then continued, “He looked like he was wearing a wig.  Did people back then not have real hair?!”   So we conversed about the fact that people have always had real hair and why they wore wigs, and on and on about hair and wigs and people “back then.”
As we drove to meet his group at Quik Trip, Aaron talked about things that he always talks about…………the funny shaped house, the bulls in the field, and the candy-cane striped cement dividers in the dentist’s parking lot.  And cappuccino.  “Mom, what is cappuccino?”  I answered that question briefly, and he said, “Last night I saw some at Braums.  It looked like a greenish dark color.  That’s nasty!”  So I assured him that it was his color blindness that caused cappuccino to be a greenish dark color, that it was really not greenish dark, and that yes………he would like cappuccino if he ever tasted it, greenish dark color and all.
After Aaron returned from Paradigm, we picked Gary up at work on our way to Cracker Barrel, where we met Aaron’s special friend, Rosie, and her mother, Louise.  This was the first time that Rosie had joined us for Aaron’s birthday dinner.  Aaron had been so excited that she was coming and had talked about it for days.  I had told Louise not to get Aaron a gift, but several days earlier she had told me that Rosie really wanted to get something for Aaron.  So  Rosie brought a gift for Aaron………a spiral notebook, some ball point pens, and some Mike and Ikes.  And a birthday card, signed by Rosie.   So sweet………so simple………….so special.  I wasn’t sure what to expect with the two of them together, but it was so funny to see them sitting right beside each other, yet not talking.  Aaron spent the majority of the evening talking to Gary, while Rosie talked mostly to her mother and me.  Rosie likes to wear caps and to pull them over her eyes, but occasionally she would push the cap back and show her pretty, dark eyes.  On this night she had on a bright and sparkly pink hat. It was a nice evening and it was good to have the opportunity to get to know Louise better, and for us to see our special adult children together.  Their friendship is something that we are both learning to treasure and to understand. 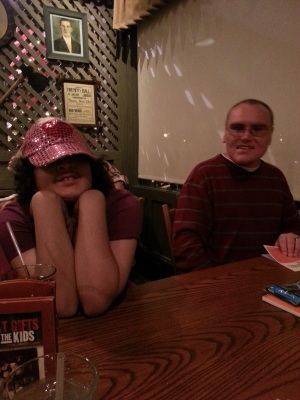 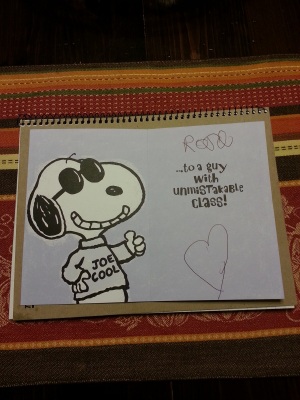 Soon the night was over, we were home, and Aaron’s gifts were all opened.  He ends these birthdays much like he ends a movie.  The plot has been planned and carried out, the action has all taken place with the major characters involved, the credits are finished, and off he goes to his room…………carrying his gifts and moving on to the next event.  He never seems greatly  excited about most of it, though we know that he is by the way that he plans it and the way that he talks about it for weeks beforehand.  We had to urge him to thank Rosie for the gift that she gave him.  If you go by his outward reaction, he didn’t seem to be very thrilled with it.

But don’t be fooled.  Last night, when he came down to play Skip-Bo with me, he was carrying one of the pens that Rosie had given him.  He reached over and removed the usual pen from his notebook in which he records our Skip-Bo wins.  “Mom, I want to start using Rosie’s pen now in my Skip-Bo notebook.”  I told him that this was fine and he said, “Well, that old pen was almost out of ink anyway.”
I knew it wasn’t almost out of ink, but I didn’t say a word.  I left Rosie’s pen laying on the notebook.  Beside her pen was my discarded wrapper from a fruit bar that I had just eaten.  And without saying a word, Aaron reached over and moved the wrapper away from Rosie’s pen.  Then he said, “Don’t put trash near Rosie’s pen.”
And there you have it.  Rosie’s pen is a very special pen, because Rosie is very special.  You don’t put trash near Rosie’s pen.  There was a small glimpse into Aaron’s heart.  I won’t read too much into it, but I do know that Aaron has never cared about any other pen to that extent.  I value this little look into how he feels about his special friend, Rosie, and how much he treasured the gift that she gave him.  He won’t express it verbally like you and I would, or be able to write it in a pretty poem or story.  With Aaron you must be alert to these simple, brief moments in which you see into his heart and his thoughts.  It passes in a moment, and I know better than to ask probing questions or to seek more explanation from him.  I am satisfied with that moment, brief but profound.
I am thankful that Aaron has a special friend, a girl, with whom he has formed a unique connection for some unexplained reason.  Can any of us explain these things?  There is so much that Aaron will never be able to experience in this life, so having this friendship now is indeed a warm spot for him.  It’s a touch of normalcy in a world in which Aaron is usually anything but normal.  I’m glad that we invited Louise and her sweet daughter, Rosie.  I’m glad that Louise had the wisdom to let Rosie buy Aaron that gift.  I’m glad for what the little pen showed me about Aaron and his connection to Rosie.
And I’m glad that now I know to keep my trash away from Rosie’s pen!