Skip to content
Aaron has been counting down the weeks and then the days until his latest mega-movie was out on DVD.  He usually googles a favorite movie on the very day he gets home from seeing it on the big screen in order to find out when it’s coming out on DVD.  Why do producers wait so long to put a movie on DVD?  They must not have an Aaron, who begins the countdown the minute that he gets that info from the internet.  He reminds Gary and I repeatedly about when the movie will be in the stores, so that when it does become available we are worn down and ready to just buy the movie so that Aaron will be quiet.  Another instance of throwing the parenting books out the window, which we did long ago.
Anyway, we were hoping to make a road trip this weekend and take Aaron with us, so the key to getting Aaron to go on this unexpected trip was to employ the Battleship movie as an incentive to sit in the van for hours of riding.  Well, the trip didn’t work out and so my plans backfired.  This is why you would have found me last night sitting in our family room watching Battleship with Aaron.  I promised him that I would do this, so it was best to fulfill that promise as soon as possible in order to have a peaceful weekend.  Well, sort of.  First I had to endure endless previews of the movie before we watched it and now it’s endless reviews of the movie after we watched it.

Battleship is a decent movie and is most assuredly a far better movie than Sharktopus or that awful Vortex movie (the German movie dubbed in English that didn’t match the actor’s mouth movements and was incredibly dumb……REMEMBER??!!).  We settled in for our movie, with Aaron in his usual chair with his usual multiple snacks with his usual multiple bowls for the multiple snacks with his usual water bottle nearby and his usual blanket and his usual stolen remote control so that HE can control the sound.  He was all settled, so I thought, and then he popped out of his chair again so that he could go get his usual napkins that he forgot……….so the entire usual process of his settling-in began again.  All that wiggling!  He was like a worm on a hot rock!!
Finally it was time to start the movie.  “Mom, there are eight things before the movie starts so you can skip over those.”  Aaron means that there are eight movie reviews before the movie starts.  He knows this because he has already been sneaking peeks at his new DVD and has memorized these important elements.  So I skipped those eight things and came to where the movie was to start, but before I hit “Play” we had to watch this exciting preview of Battleship……….because Aaron ALWAYS watches this part of the DVD……….over and over and over.  Thankfully, we just watched it once and then it was time to endure…..I mean, watch…….our Battleship mega movie.
Aaron immediately had questions about this and that in the movie.  I reminded him that he had already seen the movie and I had not, so he should know the answers………….and he reminded me that it was back in May that he had seen the movie………..so he had forgotten.  I doubt that.  We watched a few minutes and then Aaron said, “Oh Mom!  This is near the part where he gets zapped!”
Don’t tell me that, Aaron!  I want to be surprised!  Besides, how do you remember that if it was SO long ago that you watched it?
Aaron can’t be quiet for long and soon he had more questions, which prompted me to remind him that he had seen the movie before.  He replied, “Mom, stop saying that!  I haven’t seen it since May 2012!!”
Aaron continued to give me movie insights as the movie progressed, and to ask many questions………….such as, “Do you want him to be the senior officer?    I wouldn’t!  He’s quite clumsy!”  Really?  I thought the whole movie was becoming quite clumsy and quite corny and very definitely quite unbelievable………..just like Aaron loves his movies to be!  And between the screeching of metal and explosions and alien ships and battleships and fighting and way too much drama……….and Aaron’s clapping and yelling and input and questions………….I was exhausted.  Plus I truly think this whole event raised my blood pressure.  I was scared to check it, hoping that a good night’s sleep was awaiting me where my body would return to normal.
For Aaron, though, the ending of a movie is just another beginning.  Now he has the freedom to talk and talk and talk about every aspect of the movie that is imprinted on that brain of his.  And so it started, as he cleaned up his napkins and his bowls and his water and his snacks………..and asked me to put the movie in the case and slip the case in the box, because the case always goes in the box………the endless questions and comments were just beginning.
How did the missile from the plane kill them?  Why did they have knives in their hands?  Were the Martians on the mountain arming missiles or something?  Could they talk?  Why did the sun hurt their eyes?  Were they trying to call in other Martians?
This did not help my blood pressure.  This did not help my tired, over-stimulated brain.    I have discovered that “I don’t know” is an answer that he easily accepts, yet keeps him moving right on to the next question.
I slept well.  This morning Aaron lumbered downstairs to inform me that he had also slept well.  Within 60 seconds, as expected, he launched in to more movie commentary and questions.  As I fixed breakfast and as we ate, it continued.
Are the Martians strong or half-strong?  Are the Martians dumb?  The Martians didn’t even care about his fake legs.  How come they can’t tell metal on a person?  I just wondered what’s so different.  You know what I thought was so dumb?  They didn’t kill all the people!
We prayed over our breakfast and as we looked up he didn’t miss a beat.  Oh Mom, did you know that Martians can suck up human electricity?  You know that fish ship can suck up electricity?  I like their legs.  They’re skinny.  It’s neat how you could see the inside of the Martian ship.  That guy was dumb because that one Navy said this wasn’t a good idea but he did it anyway – he woke the Martians up.  That ship looked like a fish.  It jumped out of the ocean.  Fish do that, right?  How come they wanted an X-ray computer vision mind?  I like how the aliens talk – they don’t really talk. 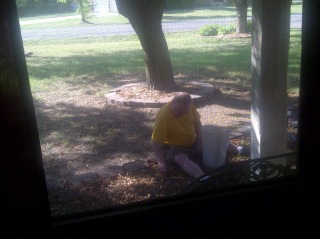 Whew!  Aaron finally went outside to relax in the mulch as he loves to do.   I took a deep breath and tried to clear my mind.  Now I’m thinking of his last comment:  “I like how aliens talk – they don’t really talk.” 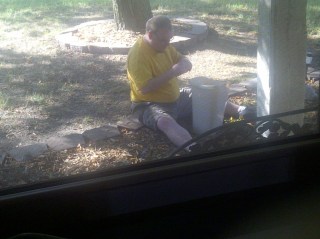