I was driving on Kellogg this morning, Aaron beside me and a favorite CD playing.  A new song had just started.  As we drove slowly in the construction area, Aaron saw that a policeman had pulled a car over.  The policeman’s lights were flashing, so it grabbed Aaron’s attention.

Aaron then leaned over and pushed the button on the CD player that made the just-begun song start over.  This is nothing new.  Aaron does it all the time.

“I didn’t hear the song,” Aaron informed me.  “No more talking.”

“Well, I wasn’t the one doing all the talking.  You were,” I muttered under my breath.  Aaron didn’t hear me, which was a good thing or he would have punched the button to start the song over for the second time.  I felt better, though, verbalizing my feelings out loud even just a little bit.

In the Aaron imposed quietness on our way to his day group, I thought about this rewinding business.  Aaron does it all the time.  If we’re talking……and it’s usually if Aaron is talking……he will finish what he is saying and then rewind the current song.  If it’s a song I like, then I enjoy the rewind.  If it’s a song I don’t like, then the rewind can get irritating, but I endure it anyway to make Aaron happy.  Such is life.

There are some recent moments with Aaron that I would like to rewind.  Some of the moments I would rewind because I would take a different path, perhaps, in handling an attitude with Aaron.  Like last night during our game of Skip-Bo……

Paradigm sent a new form for me or Aaron, one or both, to sign.  This is a one-page form concerning the responsibilities of the person served, which would be Aaron.  I can just read the form and sign it as Aaron’s guardian.  But I felt that Aaron should know what it said.  He could read it himself, but I also felt that my reading it to him would have more impact and that I could also explain anything that he wasn’t sure about.

I explained the paper to him as we started our Skip-Bo game, and read number 1.  I read number 2, and just then Aaron said, “NO!”

I was surprised, Aaron was agitated, and no amount of urging would make him agree for me to continue reading the rest of the form.  I believe that Aaron sees these responsibilities as things that are often next to impossible for him to perform.  He becomes almost scared, which presents itself as anger.  Aaron was not very happy for the rest of the game.  He carried this angst over to this morning, not wanting to go to Paradigm.  And also not wanting to take in the offending unsigned form.

Anyway, I will get the paper to Barb, signed only by me.  And I wished I could rewind my decision to read the responsibilities to Aaron during our usually fun game of Skip-Bo.

Then this morning on our way to Paradigm I told Aaron that we could stop in Dillon’s to get him a salad.  He was happy with that thought.  We stood at the salad bar and right away Aaron stuck his hand under the hood, barely touching some lettuce with his fingers.  I fussed at him and quickly scooped that lettuce into his container.  I was doing a good job of managing his portions but then I saw a friend.  I was asking her some questions about her son who has some medical needs, holding Aaron’s salad in one hand……but he managed to squirt half a bottle of dressing on it and then add two huge scoops of onions.  I bet he’ll feel good tonight.

Aaron didn’t want me talking to my friend, though, and so in front of her he said, “Mom!!  Don’t talk to a woman!!”

There again I wish I had that rewind button and could start that whole scene over again, hopefully with a less than embarrassing outcome.

His comment to me was kind of funny, kind of not, but is so typical of moments with Aaron.  It doesn’t bother him one bit to say or do the most awkward things in public.  So whether it’s at home or whether it’s out there for others to see, there certainly are many moments that I would like to rewind and start over.

Look at him and Rosa a couple weeks ago after eating out for her birthday. 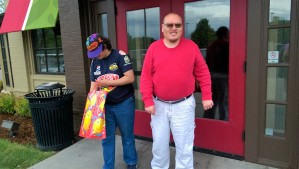 Aaron was ready to go home, you can tell.  He came, he talked (a LOT!), he ate, he got his toothpicks, he saw Rosa, and he was done.  But it was sweet, as always, to see Rosa’s delight when she came in the door at Chili’s and when she gave me a hug.  A hug!  That was awesome!

Aaron hit one of his friends at his day group recently.  On his own, he wanted to write her an apology on a card.  He picked the card out of my card box and wrote his own note.  It took him a couple days to get up the nerve to give it to Stephanie, but he did…..or so he told me.  That’s another moment I would not rewind. 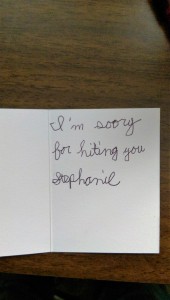 We can learn from all the moments we have with Aaron.  Some are just more fun than others.  Yes, Aaron will always, always, always put way too much chocolate syrup in his ice cream. 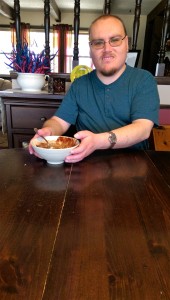 But he will also turn around and always, always, always make me smile as he tells me a story and rubs his hands together in delight, his own smile on his face. 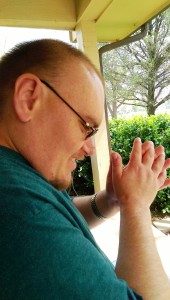 Aaron is who God made him to be.  Yes, living this life can be wearing and tiring, as my friend Joyce messaged me last night.  She called me a “fellow mother on this very strange road.”  I love her honesty, because some days our road is indeed very strange.  Yet listen to what else Joyce said:

“It’s down to taking one day at a time and realizing that this is God’s story that I am in, not my story that happens to have God on the sidelines.”

God’s story.  His story doesn’t have rewinds.  He is right here in the midst of designing our story, writing each word.  He’s not on the sidelines just watching us cope.  Nope.  He’s writing every chapter, every word of every song……for all of us.

So when I want to push the rewind button, I know that instead I need to listen closely to what God is saying and to what Aaron is teaching me.

Be quiet, Mom, so we can listen to the song!

2 thoughts on “The Rewind”