We lost our power that first evening.  Of course, it didn’t take long for us to be very cold.  Andrew sat up in bed that next morning and realizing that we still didn’t have power, and that ice was still falling, he declared, “This has been the WORST two weeks of my life!!” 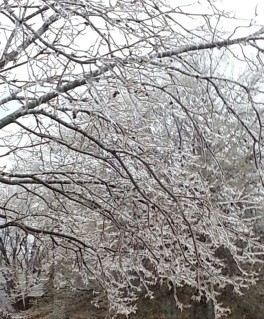 We laughed, but we certainly understood how he felt.  We had all about had it with awful winter weather!  Our power was off for five days.  Thankfully, we had hot water.  We cooked on our kerosene camp stove, we had lanterns, and life wasn’t all that bad.  We played games and read books, and actually enjoyed some great family time together.  Some friends had come over to hook us up to a generator on that fifth night.  Just when they were finishing, our power came back on.  I actually felt bad for all the work they had done only for us not to need the generator.  But oh, when those lights came on and the heat started up, we were very happy indoor campers indeed!
We really had lots to be thankful for in the midst of all the craziness of those two weeks.  We had a safe trip in the dangerous weather, time with family in West Virginia, safety in the ice storm, food to eat, warm clothes and lots of blankets, hot water, indoor bathrooms at home in the ice storm J,  Aaron did well, and so much more.
And oh yes, none of us got arrested!!  I won’t tell you how close we came a time or two.